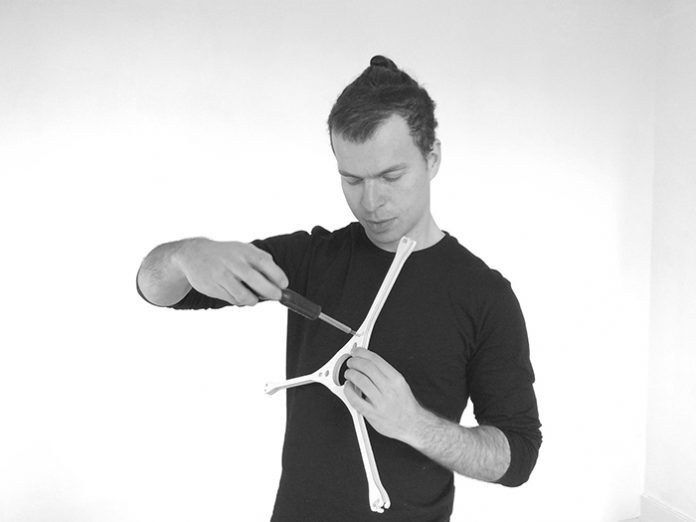 Sustainable design goes without saying, right? It should be something everyone strives towards, right? According to architect and designer Joost Heremans, sadly, not all of the lighting industry is quite there yet.

Set up by architect and designer Joost Heremans, previously Associate Partner at Fosters+Partners, the Muunlight pendant lampshade – a reinvention of the traditional pendant – is the company’s most recent launch and at 2.4m, is one of the largest pendant lampshades on the market. The minimal design looks something similar to a floating zeppelin: defying gravity. Delivered as a flat pack, with assembly instructions available online to avoid the printing of paper, the engineered timber structure is super lightweight, while the screen is made of Japanese Kosuke paper.

Sustainability is implemented throughout the design process – from concept ideas to the detail. “Sustainability is always in the back of our minds,” Heremans tells darc. “To achieve sustainability, we need to make it easy, attractive and affordable for people everywhere to lead whole sustainable lifestyles – not just green buildings, but wider infrastructure, products and services as well – all wrapped up in a simple and clear story that people can understand.

“The ten principles by One Planet Living is a target we aim for; using sustainable and healthy products such as those with low embodied energy, locally sourced, made from renewable or waste resources. We aim to reduce waste, reusing where possible and ultimately sending zero waste to landfill.”

Not your most typical of business plans, the Muunlight workshop is based out of a 200-year-old farmhouse, which has been converted into a self-sufficient eco-community, producing their own food and energy with no waste. All profits from the Muunlight sales go to tree planting projects around the world.

As an architect and designer, Heremans’ credentials are beyond dispute. His first role at Foster+Partners in 2002 was to work on what would become an award-winning project, the Leslie L Dan Pharmacy building at the University of Toronto, Canada.

It was an auspicious start to what would become an impressive roll call of over 50 major projects; from New York to Astana… A mixed use tower in Istanbul; a carbon-neutral resort in Cuba; the five-star ME hotel in central London; a design for a 600m tower in Chicago; a headquarters tower in Calgary, Canada; the 2022 World Cup football stadium in Qatar; a children’s hospital for the University of Iowa; a 300m high residential tower in Beijing and the new airport in Mexico City to name but a few.

“Architecture and lighting design are complementary,” continues Heremans. “When they work together, it touches the senses. In Burgundy, there is a place called Vezelay, a small, picturesque town on a hillside. On the top of the hill sits the Basilica, it catches the light beautifully. The windows are positioned in such a way that at lunchtime, during the summer solstice, the sun projects nine light beams into the middle of the Basilica. It never stops amazing me. The art of architecture is there to make the light visible and the art of lighting design is there to make the architecture visible.”

The idea for the pendant lamp dates back to 2010, Heremans tells darc more: “I cannot deny the Japanese influence: the translucent paper screens, the minimal lightweight timer structures, the sharp daylight, the praise for the shadows… the long flights. The idea was to create something large and lightweight – defying gravity, almost floating and part of the challenge was to design a timber structure with minimal material used.”

With the use of full size models and mock-ups, the options were analysed in three dimensions. Seven years and more than 20 full sized mock-up models layer, Heremans reached the point where he couldn’t make it ant lighter, the engineering was stretched to its limits.

“Creating sustainable design is like eating vegan. It is healthy for yourself and healthy for the planet. There are only advantages, but it does require some effort.”