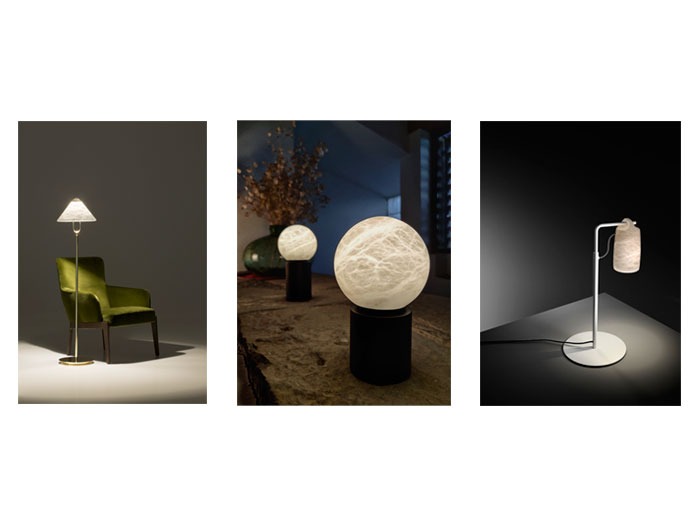 The Delta Awards aim to celebrate excellence in design and emphasise its importance as a prime tool for creating wealth in an industrial economy, as well as highlighting its role as an expression of our culture. Since 2011, the Delta Awards and ADI Medals have been held during the FADfest, in 2020 they will take place in the Barcelona Design Week, which highlights the energy and wealth of Barcelona in the field of design. The finalist objects are shown to the public on the pages of the catalogue and can be viewed at the “FADexpo”.

Tribeca USB. An extension of the Tribeca collection, with its characteristic spherical alabaster lampshade but this time turning it into a portable autonomous luminaire, which allows the touch of warmth and elegance that transmits from the alabaster stone to any corner, either indoor or outdoor, thanks to its IP45 protection. Specially designed to enhance tables and terraces of stylish restaurants.

This stone, which comes from national quarries and is very traditionally Spanish, gives each screen a unique identity, with white and grey-ish veins, sometimes with fascinating earthy hues and a smooth translucency.

They are two versions available in 20 and 24cm high that can be used individually or in groups. The structures are produced in painted galvanised metal textured in black, corten or white finishes and include a fully dimmable LED1.3W3000K150lm powered by a lithium polymer battery that is recharged using a USB cable giving the luminaire an autonomy of eight hour in full intensity. 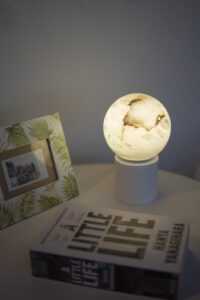 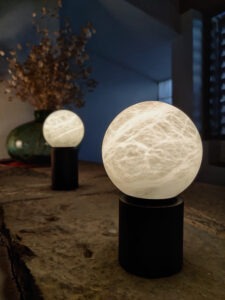 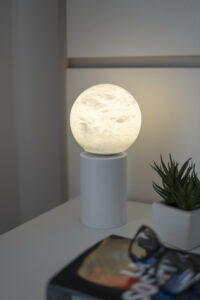 Fuji. Fuji is made with a polished brass finish, with a clearly Art-Deco influence and a conical alabaster shade inspired by the shapes of Mount Fuji, the famous Japanese volcano. Fuji transmits serenity, softness, elegance and minimalism and is a handmade collection. The alabaster denotes a great warmth and gives it a spectacular look when the light is on and off. Each shade has a unique identity and the metal structures are simple and contrast in a harmonious manner with the heaviness of the stone. The Fuji collection consists of four models: two single pendants -one with a 22cm diameter shade and the other with a 30cm diameter shade-; a table lamp with a 22cm diameter shade and a floor lamp with a 30cm diameter shade. The structures are made of iron with electrolytic bath in polished brass finish. All Fuji fixtures include a non-dimmable Seoul integrated LED of 4,6W 2700K 260lm in the case of the small shade, and four 85W 2700K 335lm in the case of the larger shade. 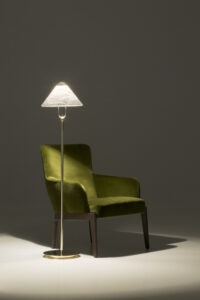 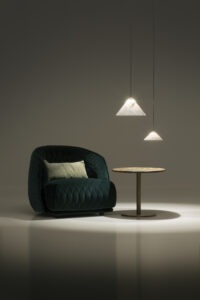 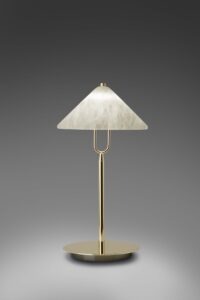 Paros Alabaster collection. This collection, thats most visible feature is its beautiful alabaster shade. It has a fine and polished touch and no two are the same, since each of them is made with a different fragment of the alabaster block. This collection plays with the contrast between simple structures on one side and the heaviness of the stone on the other: the perfect balance between both is the axis of the collection. Paros Alabaster is ideal for elegant and distinguished spaces, whether in a home, in the lounge of a hotel, in sophisticated hospitality spaces and, in general, in avant-garde interiors, although it also adapts to a vintage decorative style.

The collection consists of four models: floor, table, wall and suspension. The structure is made of painted white textured iron and the shade is made with polished alabaster. All versions include a E14 socket, allowing the end user to choose from all the light sources available on the market, specifying the intensity and temperature of light they prefer, either traditional (max.20W) or LED. 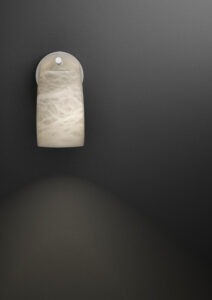 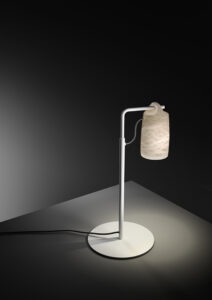 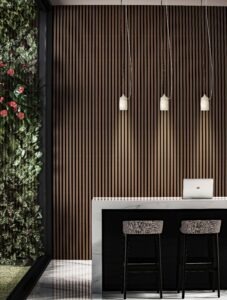