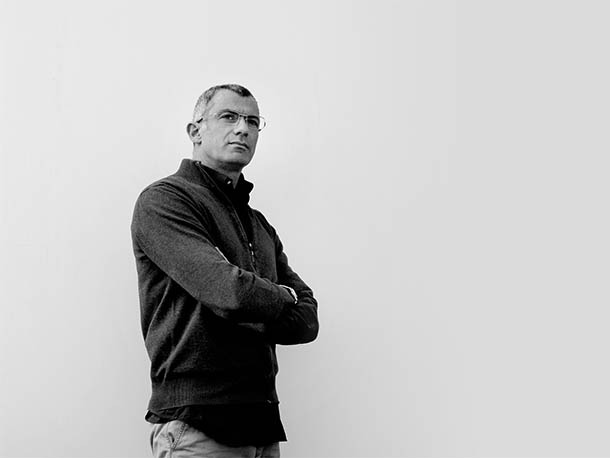 Visitors to Vibia’s Euroluce stand had the pleasure of seeing Arik Levy’s latest lighting experience – Curtain. Here, darc takes a look at the man behind the design.

Artist, technician, photographer, designer and video artist, Arik Levy’s skills are multi-disciplinary and his work can be seen in prestigious galleries and museums worldwide. Best known for his sculptures (such as his signature Rock pieces), his installations, limited editions and design, Levy nevertheless feels “the world is about people, not objects”.

Hailing from Israel, Levy moved to Europe after his first participation in a group sculpture exhibition in Tel-Aviv in 1986. Following studies at the Art Center Europe in Switzerland he gained a distinction in Industrial Design in 1991 and, after a stint in Japan – where he consolidated his ideas producing products and pieces for exhibitions, Levy returned to Europe where he contributed his artistry to another field – contemporary dance and opera, by way of set design.

The creation of his studio in Paris, which he still works out of today, meant a foray back to his first love – art and industrial design, as well as other branches of his talents.

At this year’s Euroluce, one of Levy’s latest designs made itself known on the Vibia stand. Curtain, is a new lighting typology – a light fitting and partitioning system combined; a light fitting that is equally functional in the off position as it is in the on position.

The system is more a lighting experience than a traditional light fitting and can be used in a myriad of ways depending on the different applications of the various versions: as a suspended chandelier of assorted hanging light planes; a feature light fitting above a dining table; an installation within a reception or public space; or equally as a floor to ceiling partition system for office and professional spaces.

Each version reacts with the reflecting qualities of the hanging fabric, which in turn is specific to each of the different versions, playing with the tonal shadows and patterns of the textiles. The system is manufactured in different widths and lengths, adjustable in terms of the suspension cables used to support the fitting from the ceiling. Curtain also makes an impact when used as a partitioning system within large open plan spaces, such as offices where architectural design and character is an important consideration.

Considering himself now more of a ‘feeling’ artist, Levy continues to contribute substantially to the interior and exterior milieu, his work including public sculptures, as well as complete environments that can be adapted for multi-use.

“Life is a system of signs and symbols,” he says, “where nothing is quite as it seems.”