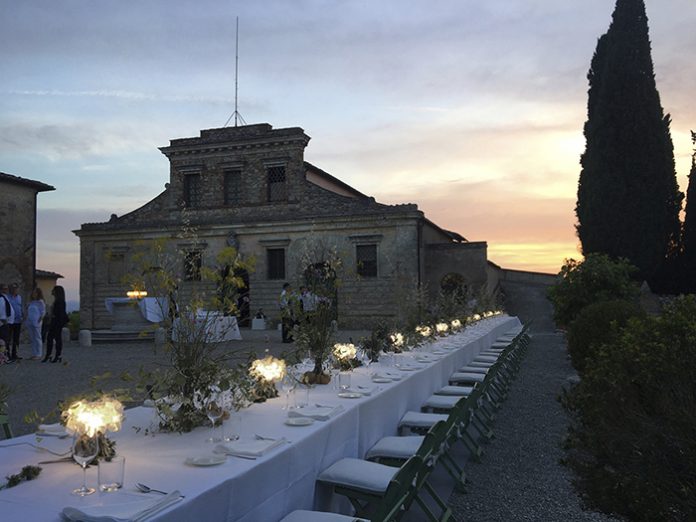 (Italy) – Slamp’s Clizia Table lamps set the mood for a suggestive outdoor dinner, held at the Felsina vineyard during summer 2016. The dinner was held in the vineyard’s garden as part of the ‘Art of the Treasure Hunt’ event, an exclusive experience organised for international art collectors to explore and purchase modern art while visiting vineyards throughout Chianti.

A portion of the benefits from the items’ sale go to Robert Wilson’s Watermill Center Foundation, an interdisciplinary laboratory focusing on the arts and human studies, giving young artists from around the world residence and study opportunities. This year’s treasure hunt was in honour of the foundation’s tenth anniversary. Slamp’s lamps were part of two on-going site-specific installations on the Felsina property, which were open to the public until the end of October.

Wilson’s own La Traviata light sculpture, designed in 2015, and Zaha Hadid’s Aria Gold, unveiled this past April during the 2016 Salone del Mobile, were hung in striking contrast to the aged barrels and stone walls of the wineries cellars. Slamp’s Clizia graced the dinner table during the Treasure Hunt’s dinner party. The Clizia Table lamp is part of lamp family that includes an array of functions, finishes and colours. Slamp’s patented Lentiflex and Cristalflex Fumé polymers diffuse light softly and evenly, and the lamps’ 230 manually folded elements create sensuous volume in each of the collection’s forms.

The table version has a base that connects magnetically to the diffuser, making cleaning and maintenance easy. As was the case for the Felsina dinner, the lamp is available in a battery-operated version, making it not only portable, but allowing varying lighting combinations and outdoor use. The soft, slightly opaque polymers refract the light, casting a play of shadow and form onto any surface, and the minimal base sturdily supports the lamp without appearing bulky or distracting from the lamp’s endless folds.

The “Art of the Treasure Hunt” dinner was a perfect example of Clizia Table Fumè’s versatility. In a rustic environment, the lamps’ modern silhouette, slightly inspired by the classic bedside table lamp of yesteryear, fit in perfectly. The illumination looked like contemporary candlelight, perfect for an al fresco Tuscan evening.