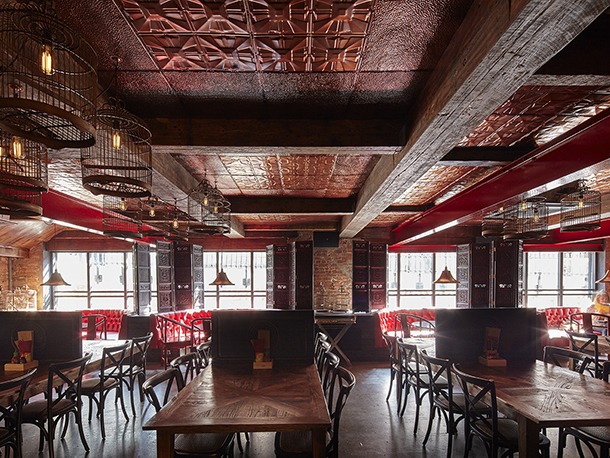 Blind Tiger in Liverpool transforms into a new bar and restaurant through collaborative effort between Industville and Snook Architects.

In the basement site of former martial arts Dojo, JSM Bar and Leisure’s Blind Tiger is a contemporary dim sum restaurant and bar, which fuses Asian design with Liverpool industrial heritage. The exposed brick walls, steel work detailing and reductionist finishes allow the quality of the materiality to express itself. The furnishings and decor, used to soften the raw materiality, are suggestive of the Asian theme without being overly oriental to attempt to avoid the clichéd interpretation of an Asian eatery.

In construction and planning terms, the interior was remodelled and heavy steel support portals were added to carry the partition wall. On the above floors this necessary undertaking provided a carved out bar area, linking the dining area to the service area and kitchen. A rear entrance was also formed with under-canopy access stairs to a Zen style urban garden.

Describing it as an Asian speakeasy and cocktail destination, Creative Director of the venue Peter Kane commented on its diversity: “It’s a basement space with individual areas including a reception, an outdoor courtyard, exclusively private alcoves, a performance stage for live music, and house dim sum.”

Kane commented: “After looking at the space for some time and assessing it’s potential the idea of an Asian speakeasy just fell into place as the obvious concept.” Adopting the spirit of the venue’s former occupation, Blind Dragon naturally and easily suits its space and cuisine, with a deeply authentic and industrial lighting scheme to match.

All photography by Andy Haslam – www.andyhaslam.com