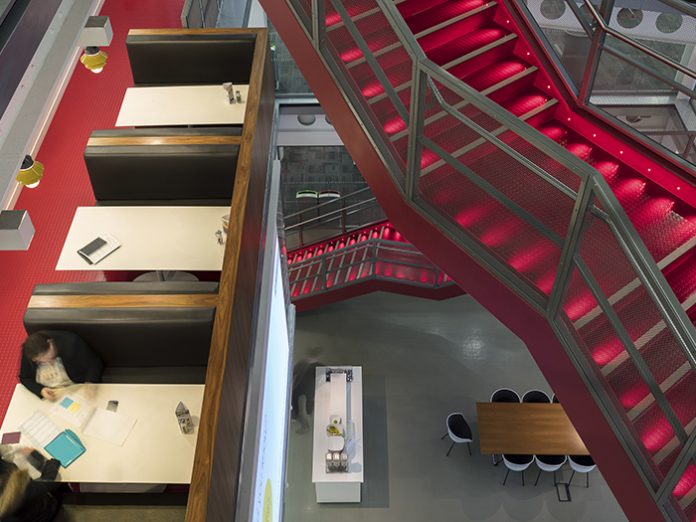 align complete a vast new workspace project for an Australian financial services client in the city of London.

As workspace specialists align was briefed to design 13,745 sqft of new working, meeting, presentation and break-out space across 1.5 storeys at the client’s City of London offices in order to meet a period of sustained growth and house three divisions of the company, totalling around 150-170 people.

align had previously worked on an office interiors scheme in Reading for the same client, before being instructed to create this new Cat A and Cat B scheme, where the brief was to include integrated, but differentiated, zones that worked within the overall building environment with a pronounced accent on biophilia, agile working and staff wellbeing.

The client’s Head of Infrastructure Technology and Business Services – EMEA, commented on the project: “Our objective here was not to just fit-out the space in line with the rest of the building, but to use people-centred design to challenge our thinking and create a number of new inspiring spaces. We aim to create and manage high performance work environments and client spaces that are a consistent representation of our global brand and our spaces are managed to the highest possible standard, reflecting our culture and aspirations.”

The scope of work mostly covered the building’s eighth floor, where general workspaces are located, along with a staff kitchen/pantry; a large multi-use presentation and townhall space; five meeting rooms and a large breakout area with an indoor-outdoor feel named The Terrace. The multi-functioning presentation area was deemed particularly important to the success of the project and is able to be combined with The Terrace area, with a folding wall between the two, in order to allow large-scale events to be held there. The scheme also encompassed a number of private working booths, as well as a more relaxed work/meeting area on the storey above, on the building’s ninth floor.

“The eighth floor space really was a blank canvas when we took the project on, in spite of most of the building having been fitted out for several years already,” Gurvinder Khurana, align Director and Co-founder, commented. “The spaces were effectively concrete shells and so could be designed to serve the required functions perfectly.”

The existing building has a strong statement core, including a red feature staircase created by the scheme’s original architects. This new design project needed to acknowledge and talk to this dominant feature. This was achieved via the use of red throughout – from red lines, for example, within a grey carpet in corridor areas, that also echo the staircase’s angled geometry, with Fegerhold lights directly above further matching the carpet insert angle.

A striking red feature was also used on the building’s ninth floor, in the form of a rectangular feature wall area, which is clad in individual, red Muratto tiles in 3D off-centre pyramid shapes, angled once again to mimic the stair. This idea is continued along a narrow galleried seating area on the same floor, where the tiles this time are arranged as wall art in a series of alternating four or six-tile portrait-format rectangles, accompanying a six-person meeting space.

The client brief also requested the use of glass to maximise natural light and the scheme therefore features fire-rated glass for dividing walls wherever possible. Further light was created via white-painted ceilings, deliberately exposed, allowing for a very generous 3three metre ceiling height – almost a metre more than the average office interior – whilst at the same time ensuring a less corporate feel.

From an energy perspective, the large elements of glazing pull in as much natural daylight as possible, with cellular spaces confined to inner core areas and the lighting scheme is entirely LED-driven, with suspended up and down-lighting to limit glare to work surfaces. Floor finishes, meanwhile, feature a high degree of recycled content, as do the slatted timber acoustic panels in the presentation space, made from off-cuts of Australian red cedar.

The client’s Head of Infrastructure Technology and Business Services – EMEA said of the designs that “align really hit the mark, creating inspiring workspaces containing light touches of design that are both aesthetic and functional. Meeting rooms contain acoustic pendant lights to improve audio performance and collaboration spaces utilise movable walls, tables and booths to create multi-purpose and flexible spaces that users can change themselves.

We judge our spaces by how they make people feel, think and act. The feedback from the business has been exceptional and we believe the change to how people feel about the work environment is clear. With align we have created spaces for people to focus and the increased use of the collaboration zones has driven greater interaction across business groups.”