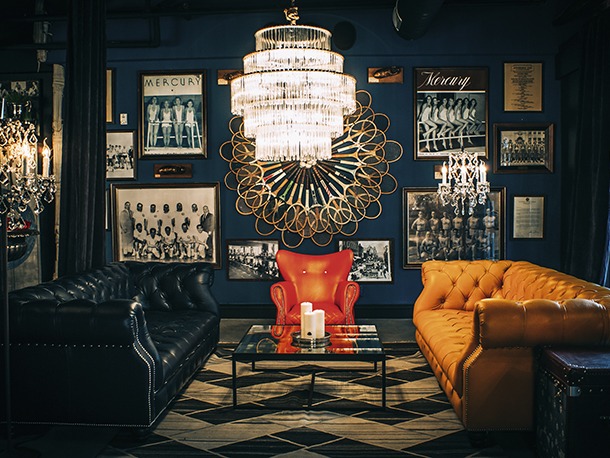 In downtown LA, British designer Timothy Oulton has transformed the historic Los Angeles Athletic Club (LAAC) with a redesign of its eminent Blue Room. From a humble start as a small family owned antiques shop into the renowned brand it is today, Timothy Oulton’s designs bring with them a history of their own. Profoundly influenced by his love of antiques, his father’s military background, and an inherent affection for British heritage, Oulton created an authentic, visionary brand, known for its modern reinterpretation of traditional designs and respect for classic heritage. Now an international brand, Timothy Oulton’s designs marry effortlessly with this exclusive LA-based speakeasy, together celebrating over 100 years of LAAC heritage with a fresh, modern reinvention.

LAAC’s original Blue Room, opened in 1912, hosted prestigious members of its influential Uplifters Club, formed in 1913, which included Walt Disney, Charlie Chaplin and Clark Gable. Having been run by the Hathaway family for six generations, the LAAC remains a cultural institution in the city. When they approached Timothy Oulton to recreate the Blue Room, it was the perfect pairing. Oulton commented on the relationship: “Heritage and authenticity are hugely instrumental in everything we do, so this was an exciting collaboration to put our stamp on such an iconic landmark. The idea of hosting, creating inspiring spaces where people can relax together and connect, that’s what our collections are all about, whether it’s in your own home or in a setting like the Blue Room.”

The four-week project to transform the fourth floor conference room into a sophisticated lounge and bar was headed up by Oulton’s team, led by Global Style Directors Danielle Monti-Morren and Raoul Morren. Work began by taking down the false ceiling to expose the pipework and spraying the ceiling black. The old carpet was lifted up and the concrete underneath was polished to achieve an industrial look. Oulton commented on the room’s layout: “It’s just one open plan room designed to be used as separate intimate areas or as one cohesive space if people want to take it over for a party.”

During the LAAC’s renovation, a hidden staircase was unearthed between the third and fourth floor; a clandestine passage used during Prohibition in the 1920s. Oulton continued: “We used the staircase for the entrance and we built the trick bokocase on the third floor below,” celebrating the club’s heritage by adding a sense of humour and playfulness to the project. A trick bookcase in the third floor bar now opens on to the secret stairwell, where black walls are covered from floor to ceiling with framed photographs chosen from the LAAC’s archives, each one telling a piece of the club’s history. Monti-Morren commented on the design: “Our aesthetic always begins with authenticity. We wanted to preserve the history of the club but marry it with something daring and modern. The room is a hub, a meeting place, a spot for business to happen, but also a place to celebrate.”

After ascending the secret staircase, guests walk in through heavy black drapes. The four distinct areas are designed as the corners of the room for intimacy and privacy, rather than guests meandering from one through to the next. The Blue Room’s walls are all black, save one accent wall of Oxford Blue, creating a depth of coordination with the existing shutters that frame the large windows.

Upon entering the room, on the right is a quiet nook by the window, lit under the mellow glow of brass Drum and Crystal chandeliers, where guests sit in oversized leather wingchairs that offer decadent comfort around brass Drum side tables, exuding the air of a classic gentlemen’s lounge. Further along the same wall, next to the large windows, is another lounge area with the Senior Common Room sofas where Timothy Oulton’s Test Tube chandelier, made of laboratory test tubes, hangs in the foreground of Match Point, an artwork created from vintage wooden tennis rackets. From here, guests can venture over to the bar on the opposite side. Another Crystal chandelier in antique rust finish is suspended above the rustic oak Boston dining table topped with distressed aluminum next to the American lockers.

Then walking back to the entrance, in one candle-lit corner, Timothy Oulton’s Gyro lamps pervade an industrial elegance with an antique rust finish inspired by ancient navigational instruments. Oulton’s signature flair for juxtaposing the classic with the contemporary is further brought to life in the hand-softened leather Scholar armchairs and Westminster Union Jack sofa, as well as the Axel coffee and side tables, handmade from reclaimed boat wood.

With a different niche for each of those seeking refined comfort and exclusive design, the LAAC’s Blue Room is an unbeatable venue available exclusively to its members. Timothy Oulton has encapsulated the elegant blend of British and American style, creating a decadent cave revealed only to those who can find their way through the hidden entrance.