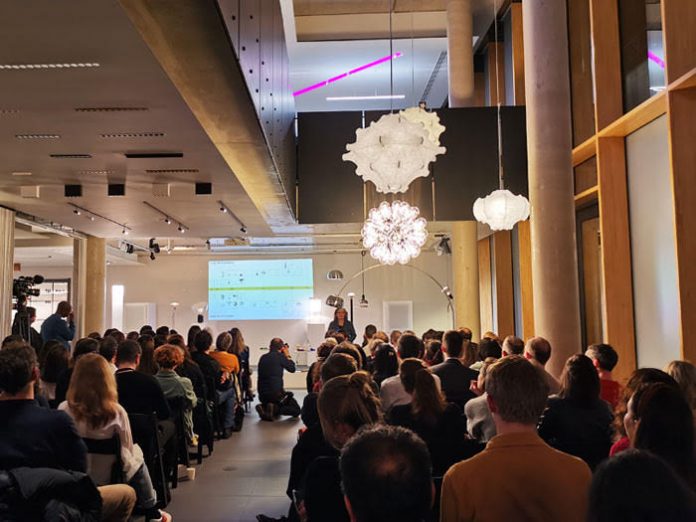 The newly re-edited Bulbo57 was officially launched in the UK by Giovanna Castiglioni at an evening event with Flos on 30 January at Atrium’s showroom in London.

Giovanna Castiglioni is the youngest daughter of the late Italian lighting designer, Achille Castiglioni. During the evening’s presentation, Castiglioni not only discussed the new Bulbo57, but also gave an inspiring overview of some of her father’s most well know lamp designs.

The Bulbo57 was first designed by Achille and his brothers Livio and Pier Giacomo, as the Bulbo for an installation at the XI Triennale in Milan in 1957.

“A long time ago, it was just an experiment with a bulb, but today it’s amazing. Usually, with lamps you have a structure or components, but with the Bulbo, when you switch it off, it disappears, ”explained Castiglioni. “This was part of the design brief for my father, to design something that when it’s off you cannot see it. He loved to make something that disappears in a space.”

“For my father, the shape wasn’t always as important, it was more about the function of it. This is why he specifically designed different shapes for different functions and there is a unique style between the different lamps.”

The simplistic nature of the first version of the Bulbo proved hazardous for current health and safety standards, which was one of the main reasons it was selected by Flos to be modernised.

The new lamp is made of blown borosilicate glass with shock proof resistance. The LED filament is held in position by a molybdenum structure incorporated in a thin borosilicate glass tube, which is also used to extract the air to prevent the build up of condensation.

“For me, it’s not important that he was a master of Italian design, I think it’s important to give good energy to people and designers now, young people of today. And I can do that, because I’m not a designer – there’s no compromise or pressure. I’m just the voice, the voice of Achille and the family, the foundation. Of course, I have a big responsibility when we re-design something with companies, but I’m happy when we have a good relationship with a company, it’s a smooth process. Especially if you believe in someone else, it makes for good teamwork.”

The Bulbo57 prototype was presented last year at Euroluce, and officially released in December 2019.