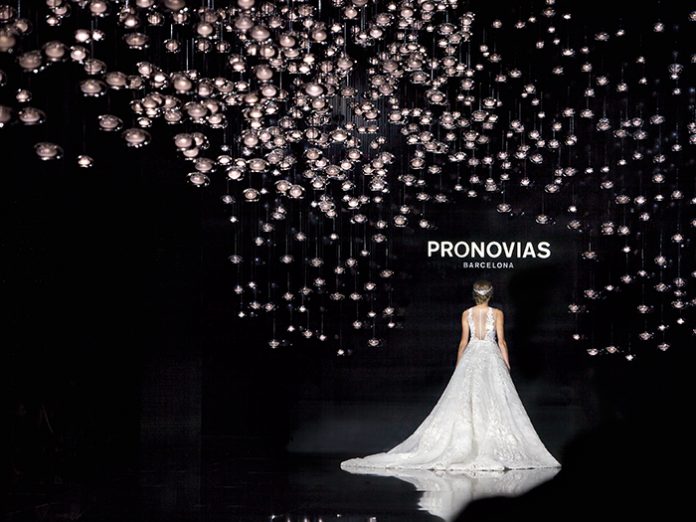 When it came to lighting the 2017 Pronovias bridal fashion show, lighting designer David Monguet knew he needed something extra, that show stopping moment… And so, making it’s onstage debut, we introduce ByBeau’s Dimple.

Marriage is a moment that stands as a symbol, a union, a meeting of minds. Creating that ‘moment’ is fittingly collaborative, as families unite and artists of all disciplines work towards that special day… And at the centre of it all, the dress.

The launch of the Pronovias 2017 bridal collection in Barcelona, Spain, reflects what a wedding dress symbolises; a meeting of minds distilled in a moment of magical intimacy, suspended amidst a breath-taking spectacle. Working to create a beautiful backdrop that enhanced and showed off the stunning wedding gowns, the lighting for the show saw talents and the meeting of minds from lighting designer David Monguet, Beau McClellan of ByBeau, Rebeca Sanchez of LEDScontrol and Sarah Cortes of Studio Cortes.

Working together, the team looked to capture the emotion of ‘that’ moment, ‘that’ dress underneath a shimmering sky of light that makes use of ByBeau’s Dimple installation – a modular lighting system designed by Beau McClellan and manufactured, built and tested, in full-scale for pre-programming ahead of the show, by Climar at its HAB50 R&D facility in Portugal.

Born from contrasting inspirations, Dimple is an interpretation of both dramatic engineering spectacle and the most intimate of emotions.

Dimple’s roots are in McClellan’s earlier project Reflective Flow, comprised of hand-ground crystals, each shrouded by concave glass and finished with a unique reflective coating. Invisible behind this glittering body was a state-of-the-art system of individually controllable LEDs. Each crystal was fully independent to create shifting tides of colour, shape and light; when illuminated the reflective surfaces become either fully or semi-transparent, bursting alive with waves of light in an unmatchable expression of movement; a unique sensory expression.

Dimple incorporates similar upgraded features, a plug and play RGBW chip, specially designed for its unique palate of colours and to give total control over each unit – giving true interactivity; with different moods and ambiences reactive to a range of stimuli. Different temperatures and movements are interpreted and expressed by Dimple to create an art installation of unlimited variability. When turned on, the two-way mirror-coated finish unveils an extra interior hand-blown glass ball.

Speaking with darc about the collaborative process for the Pronovias show, McClellan said: “The introduction with Pronovias came through Rebeca, she’s an old friend and we have worked on other installations together over the years. When she got the phone call from Pronovias’ lighting designer David Monguet, she immediately thought of Dimple and it moved from there really.

“I had never really thought about Dimple being used on a stage, so in that sense this project was really unique. Dimple was originally designed as a bespoke piece but the fact it can also be used as an amazing set piece or in its simplest form as a single pendant light, really shows its potential.

“The brief was the sky, in keeping with the title of the show, and we had about a month to pull everything together. The number of Dimples required kept increasing – we started with just 500, then it jumped to 1,000 and we ended up with 1,500 for the final installation. At this point we hadn’t ever designed Dimple as a rental kit so we also had to design flight cases so it could be transported safely and built up quickly. We really had to consider how it was all going to work logistically.

“Once we had decided on the number of Dimples required, we then had to look at what was required for the catwalk and considered lots of different designs. Getting it right and making a final decision before we shipped to the venue was key, as we didn’t want to have to start changing things once on site – also, Rebeca required a final full 3D model for progamming. Everything had to be built at Climar’s cutting edge R&D department HAB50 in Portugal first. This is also where the hanging structure for the Dimple installation was developed.

It was pretty full on and we had to work hard to pull it off, but we got there.”

The Dimple installation created specifically for Pronovias, reflects the brand’s message of luxury and glamour. The idea of using a light installation was something very new for a catwalk show, as the lighting is usually hidden in the ceiling, so for McClellan, this project has really opened up the possibilities of incorporating Dimple on stage.

At the start of the fashion show the audience were presented with the Dimple installation at stage level, hovering just a few centimetres above the mirrored catwalk floor, before being lifted up so the dresses could take centre stage.

“A couple of things happened during set up that made us realise the full potential of Dimple,” continued McClellan. “When we started working with David we discovered that Dimple’s mirror-coated finish absorbs light as well as reflecting it, so this brought a different dimension again – it became something really spectacular as David used moving heads to externally light the Dimples so we could change the colour – what could be achieved by combining all the different elements was amazing.”

Having been awarded a Design Plus Award at this year’s Light + Building in Frankfurt, and Best Decorative Lighting product at the 2015 darc awards, this latest collaboration with one of the top international bridal designers, is further reinforcement of Dimple’s unique qualities and versatility.

“Dimple has been a massively collaborative product to realise,” said McClellan, “and here again, for Pronovias, it required multidisciplinary management to involve specialists like David Monguet and Studio Cortes to create the magnificent stage lighting and set design.

All of this working towards capturing the emotion of the moment, stunningly demonstrated as each beautiful dress was presented underneath a shimmering sky of Dimple stars.”