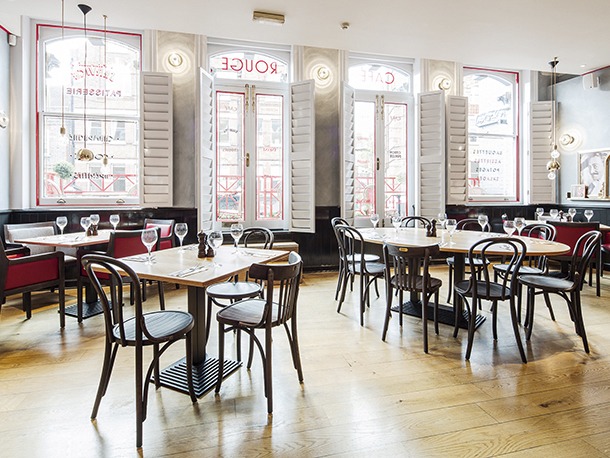 In the classic Parisian film Hotel du Nord, the actress, Arletty, famously replies to her partner after he announces he is desperate for a change of scene, ‘Atmosphere, atmosphere, do I look like an atmosphere kind of girl.’ It may have meant nothing to Arletty, but atmosphere is a crucial factor in the creation of a successful restaurant and when the owners of Café Rouge turned to AfroditiKrassa to redesign the chain’s look, the design agency in turn looked to the Hotel du Nord for inspiration.

The real Hotel du Nord, made famous by the film, still stands on the banks of the Canal St Martin, now much gentrified in comparison with the docker’s hostel it used to be.  Once an industrial heartland, the area now flourishes with urban, bohemian Parisian bistros, all prefect fuel to Afroditi and her design team.

The Tragus Group approached AfroditiKrassa in the Spring of 2012 with the task of revolutionising the iconic restaurant. The studio approached the project with sensitivity to the established Café Rouge brand, yet with a real zest to inject creativity and innovation.

The brief was largely focused on introducing Café Rouge to a new, younger audience in an increasingly competitive market place, and

with this in mind AfroditiKrassa created a new brand world and design concept based on heritage, authenticity, quirkiness and humour. Four pilot sites were launched just before Christmas of 2012, in order to gauge the response of the Café Rouge customer base and beyond. The results were impressive with large sales increases recorded.

A mix of lighting was used in the roll out of the new design nationwide, with Firefly Lighting Design providing the architectural lighting scheme and AfroditiKrassa the decorative design. Lamps from Holloways of Ludlow are a new standard in the guidelines of the brand and can be seen in restaurants across the country. A polished brass external wheelhouse wall light from Holloways as well as a wheelhouse lobby pendant light, also in polished brass, have been used to fine effect on the restaurant’s exterior. The lamps from Holloways are complimented by white LED garlands from Power Road Studios in Chiswick, which suit the large French windows and wood panels, hallmarks of the exterior design.

The interior of the bistro is fresh and airy, with multi-coloured tiles, red leather booths and rustic furniture working well together. Little trinkets of French culture have also been scattered around the interior, Laurent Voulzy record sleeves lean against iconic Jacques Tati film posters, accompanied by an obligatory Eiffel Tower or two.

Clusters of Lee Broom crystal bulbs play an important role in the interior design. The brass and crystal pendants each feature a G9 LED lamp and hover over the dining tables from gold coloured twisted flex, creating an almost supernatural effect.

Lighting from another British designer, Tom Dixon, also features in the interior of many of the new restaurants. Round sconce wall lights by the designer jut out from the bistro’s sides helping to illuminate many of the French ornaments on display, the pressed glass bowl wall light features a silver crown incandescent bulb. Tom Dixon has also provided a brass pendent void light with a hidden bulb that hangs down from the restaurant’s periphery, creating a warm and welcoming light.

A number of different chandelier options were considered by AfroditiKrassa to form the lighting centrepiece of the dining room. For the Hampstead arm of the restaurant chain a chandelier formed with red cable was chosen. The Red Connection Ball Pendant light from Shoreditch Lighting makes for a creative eye-catcher that blends seamlessly into the decor. Other chandelier’s from CB2, Litecraft, JSPR, Light in the Box and Foundry Light and Design were considered and feature in other Cafe Rougé interiors around the UK.

The new interior creates an atmosphere you want to be a part of, the first step towards the required alchemy that always makes for a memorable meal.