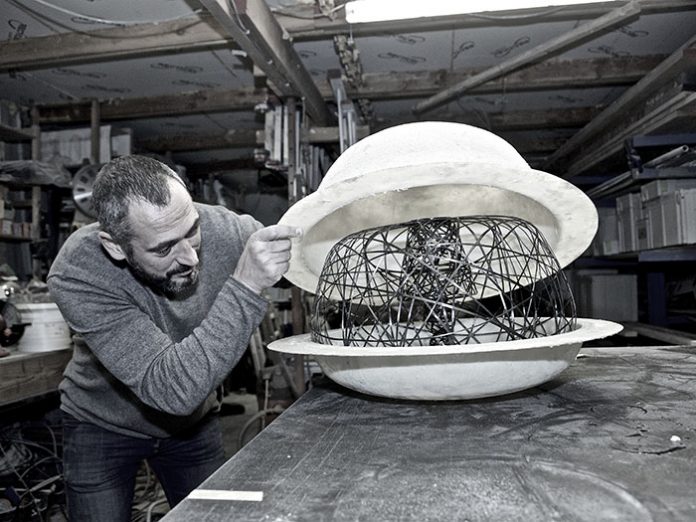 Artelier C, an initiative of Belgian lighting specialist Claeys Verlichting, is a unique concept, offering a platform for talented artists seeking to turn their hand to decorative lighting. Born for artists who put their heart and sole into creating unique, handmade lighting fixtures in all shapes, sizes and materials, Artelier C provides the ideal environment for creatives, giving them the freedom to focus on their craft. The platform offers access to information, logistics support and project management assistance, as well as worldwide administritave, financial and sales structure. First seen by darc at this year’s designjunction in London, Belgian artist Sebastiaan Vandeputte is the pioneer of the Artelier C platform.

An artist, technician and designer, his first creation was a suspended bath in polyester, followed by a collection of designer furniture in a composite material. Not long after, he discovered carbon fibre, which called for a total rethink… Carbon is the raw material that lies at the origin of our lighting universe. No other chemical element forms so many compounds – almost ten million. The best known, are diamond, graphite and amorphous carbon. After years of research, Vandeputte was the first person to transform carbon fibre into an artisan product using an industrial process.

“I spent two years on a quest,” Vandeputte tells darc, “researching and constantly experimenting with various technological processes and different types of carbon fibre. It was pure trial and error. I travelled all over the globe from Italy to Japan, looking for the world’s top carbon-fibre manufacturers.

“Getting hold of the quantities I needed as an artist wasn’t a problem, but tracking down the specific product I wanted was tougher than I expected as it turned out the kind of carbon fibre I required was used exclusively in the space industry and as such, kept firmly under wraps in Europe!

“However, the manufacturer really bought into my dreams and ideas and I eventually managed to import my precious carbon fibre to Belgium, despite the Japanese government’s draconian regulations. The result was a range of furniture, chairs and tables that received international acclaim in the interior design world.

“And then, a face from the past appeared… Tom Claeys has been exhibiting his decorative lighting products at some of the world’s most prestigious shows for years and already had many big-name clients. He too, was constantly seeking unique beauty and set me a challenge – create the ultimate chandelier in carbon fibre.”

“Sebastiaan used to live right around the corner from me when we were children,” Claeys tells darc. “Years later, in 2013, we met up at a lifestyle show in Knokke-Heist, which is where I first came across his carbon-fibre chairs and noticed how every visitor to the stand would pick up one of those featherweight gems with a look of sheer amazement and admiration.

“This is when I realised that my years of searching were finally over – the boy next door, that I had grown up with, was the guy I had been looking for all along. A designer who could create unique chandeliers for my lighting universe. I thought to myself, if he can make chairs like that, then he can also bring carbon fibre to decorative lighting.” The duo brainstormed about light, light values and lighting compositions for hours on end.

“Once I had outined what I wanted, I would leave him to think freely, create and work and he would spend hours in his studio. It was fascinating to watch him grappling with massive spheres of carbon fibre.” The end result was a magnificent collection of around 30 handmade lamps and chandeliers, all crafted in carbon fibre. This, would become the Pret-A-Porter collection.

“Things began to move quickly after this,” says Claeys. “The pieces were selected for the World Expo in Milan in 2015 and this marked a turning point – we had blown the entire architectural community away with our decorative lighting made of carbon fibre. But we knew we could do even better…

“Sebastiaan’s next challenge was to design the world’s largest chandelier for a luxury shopping mall in a huge building in Antwerp, making it into the Guinness Book of Records.

“On the back of that, we won commissions to design chandeliers for ten carefully selected architectural projects scattered around the globe, ranging from an enormous staircase to an oriental pavilion. The possibilities seemed endless!” To bring these maginificent and unique products to life, an exclusive and sensational material and production process is required. Carbon is one of the few chemical elements known since antiquity; is non-metallic, extremely expensive and has a unique diversity of organic compounds, earning it the moniker ‘King of Elements’. The isotope carbon-14 has a half life of 5,730 years.

Carbon fibre is made of up to 24,000 fibres and in pre-cured form can be cut with scissors. It is made by a chemical process called pyrolysis – in which, under very high pressure and at a temperature of 3,000ºC, precursor fibres are transformed into carbon fibre at almost the molecular level.

“The secret artisan production process requires an ambient temperature of 26ºC and involves mixing the carbon fibres with epoxy,” says Vandeputte. “They are then applied to a mould by hand and left to harden at 60ºC for three days. The carbon fibre sphere produced can reach a height of two-metres, making them extremely physically demanding to work with.”

The items created are always conceived as one single element and can range in size up to 20-metres. One finished sphere can contain up to 400-metres of carbon fibre, while there may be as many as 160 spheres in one chandelier. Available as a free-standing floor and table lamp; wall light and in two ceiling versions, the Pret-A-Porter collection creates poetic, atmospheric lighting effects, with Artelier C’s philosophy of embracing traditional values producing a distinctive baroque design language.

The collection is ‘woven’ by hand, each item different and unique, with perfect harmony achieved between the lightweight material and the envisaged silhouette, suggested by a few simple lines. A single fibre has a tensile strength of 1.5kg, meaning that the sculptured creations are incredibly strong, yet light as a feather. And the fact that the power supply is virtually invisible makes the whole design even more exclusive. The Sur Mesure collection from Vandeputte is aimed at connoisseurs of design who want to be light years ahead – with the only limitation being our own imagination.

“Our brand of haute couture is a wholly unique interpretation of the classic chandelier, free from space limitations and seamlessly blending into the architectural context,” says Vandeputte. “The lighting is designed to fit perfectly into the designated space within a building and is symmetrically and asymettrically fashioned into one huge, suspended, geometric ensemble. The effect is out of this world, which is why we named our products after constellations as unique as our lighting sculptures.”