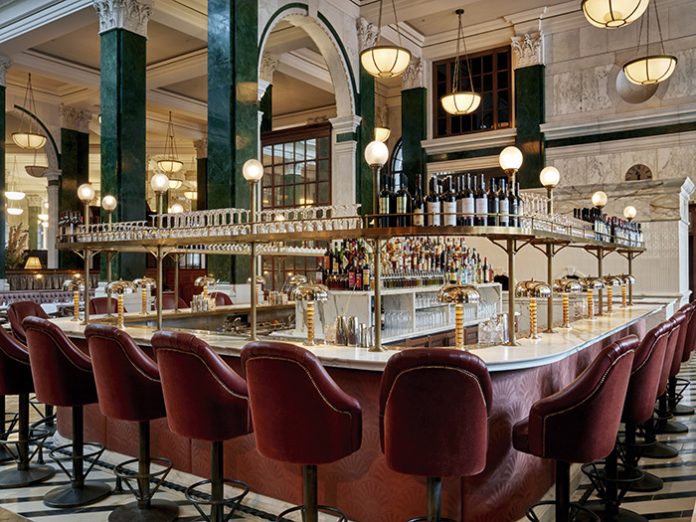 When Nick Jones, founder of Soho House & Co, first saw the disused Midland Bank building in London, he immediately fell in love. The property had been empty for almost eight years, but there was something about it – the details, the scale of it.

Partnering with the Sydell Group to bring the building back to life, the 29,450sqm of space now offers a range of hospitality features including restaurants, bars and bedrooms. The lighting design from Nulty works to highlight the building’s iconic architectural trademarks from Sir Edward Lutyens and complement each individual space, while maintaining a consistent design aesthetic. The lighting also works to provide a balanced level of light and colour temperature to suit all times of the day.

“The design brief for The Ned was to make it feel as though it had always been an old, glamorous hotel,” says Rebecca King, Designer at The Ned. “In order to achieve this, we wanted the decorative lighting to feel collected rather than brand new; we used an eclectic mix of off the shelf, custom and vintage fittings that we purchased from the US, Europe and the UK.

“The light fixtures were critical design elements in each space. In many areas, we took cues from existing lighting throughout the building to inform our stylistic choices.” Commenting on the lighting brief, Evina Diamantara, Intermediate Lighting Designer at Nulty, told darc: “We worked alongside both Soho House and Sydell Group to bring their vision alive; this vision entailed the creation of a space that would be elegant and imposing. Following these principles, Soho House invested in decorative luminaires that would make an impression on first sight and as such, all architectural lighting would only be used to enhance and reinforce the identity of the design.”

The converted banking hall features eight restaurants, divided by the building’s original listed walnut counters that line the entrance and feature authentic bankers’ lights, while the private bar is set within the original bank vault, lined with safety deposit boxes. The latest retrofit LED lamps, concealed within historically accurate, decorative luminaires, create a warm atmosphere and bring contrast to the cool steel surroundings; a mix of low-level lighting picks up the rich interior design and provides an additional layer of contrast.

A central reception desk has become a stage for live performances, with light carefully positioned under the perimeter falling on the marble plinth, elevating the feature and creating a dramatic focal point for guests. The large Art Deco skylight above is framed by coffer lighting that further enhances the architecture of the building, while staying true to the original building design.

“Each space has its own particular look and feel,” continues Diamantara. “As such, the specification of decorative lighting elements followed the design intent that Soho House aspired to. A key lighting consideration for us, was to ensure that all the luminaires, although decorative, would be able to perform as desired and provide adequate light levels for all occasions.

“Sustainability and controllability were other important aspects that were considered when specifying lamps for the decorative fixtures across the scheme and throughout The Ned, LED retrofit lamps from Segula and Zico have been used – these were extensively tested by Mode Lighting with the proposed control system to ensure compatibility and flicker-free dimming.”

Upstairs, each of the 252 bedrooms has been fitted with an intuitive ‘toggle switch’ lighting control system, for mood lighting. Staying true to the interior design, the use of low-level FF&E lighting, ensuring minimal ceiling interventions was put in place. The larger suites make use of luxurious fittings with tiered chandeliers, which were refurbished by Madson Black and more luxurious fittings, while the smaller ‘crash pads’ include subtle pendants and interior fixtures.

As a Grade I listed building, the conversion of the Midlands Bank to The Ned, did not come without it’s challenges – respecting and honouring the architecture of the building being the main concern.

“All architectural lighting introduced was very carefully considered to accentuate the architectural details rather than making a statement that would overshadow the character of the building,” says Diamantara. “We worked to deliver a scheme that would provide the functional lighting required for a hospitality space and at the same time, would be discreet in order to avoid competing with the interior design.

“Locating the luminaires was challenging and as such, in most ceilings and staircases we had to use the existing luminaire locations. A DALI control system was used for the architectural lighting and emergency scheme – we wanted to use intelligent luminaires to help with both the control and maintenance. However, existing containment had to be used for DALI cabling and emergency lighting.

“Difficult locations were the staircases where only decorative could be used. To overcome this challenge, we worked with Mackwell and Kalmar to incorporate the emergency fixtures within the decorative fittings in order to be able to comply with the regulations.”

As you get to the top of the building, Ned’s Club, located on a large panoramic rooftop saw Nulty use light throughout this area to reinforce the identity of different spaces. On the outdoor terrace, low-level lighting creates intimacy without interrupting the views across London. High-level decorative lighting has been used in the Roof Bar, where spheres of light hang from the ceiling. The two large rooftop domes have been opened up and re-purposed as private function spaces and up-lit to highlight the grandeur of the building’s architecture.

In terms of final impressions, for Diamantara the architectural lighting scheme works as it was originally intended. “It is noticeable to accentuate and bring attention to the architectural details that we aspired to see highlighted but at the same time subtle enough to let all the decorative elements such as fabrics, patterns and finishes make an impression.

“Lighting, as well as everything else within The Ned, is a form of art, a statement. All decorative luminaires were chosen by Soho House after careful consideration to create a lush environment designed to lure people in and make them want to stay, enjoy and celebrate the richness of the design.”

While there is a clear differentiation between the various areas at The Ned, the overall design goal was to create a spectacular space that felt unified. Based on this principal all the lighting works together in the space, whether decorative or architectural, harmonically to create a unique environment.

“Being the former Midland Bank, a building designed by Sir Edward Lutyens, is enough to make this project extra special,” says Diamantara. “The bank’s vault being transformed into a private member’s bar was a remarkable process and the final result is simply stunning. Within the building there are numerous items that can be admired, such as the helical staircase, the oculus stage, as well as the astounding Devonshire chandelier in the Saloon.”

“It would have been easy for the decorative lighting to be swallowed up by the immense size of the space,” says Rebecca King. “Keeping track of over 7,000 fixtures during installation did make us question whether we went overboard  but the end result feels right.”

There will always be new hotels, bars and restaurants popping up across London, but the historic centre of London has a value all of its own. Seldom do you get the opportunity to reinstate a prime example of architectural significance to its full opulence and glory. Using some of the latest lighting considerations, this charming relic marries the aesthetic of its time, and the demands of its new future.”