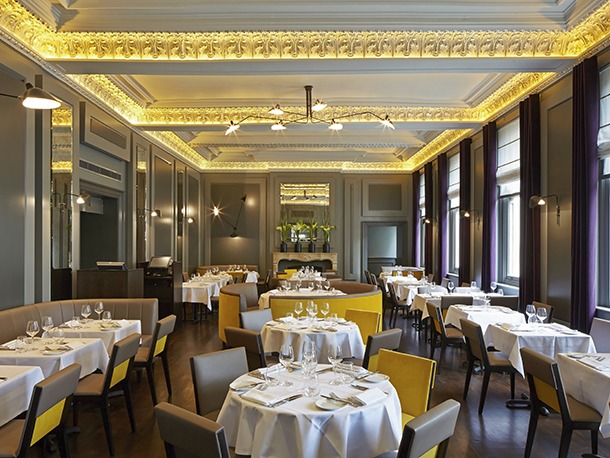 When the Monte Carlo Casino opened in 1856, gambling was considered to be something of a dubious pastime often found in seedy pubs and other dens of iniquity, yet the newly plush and gilded gaming halls of Monaco began to alter this perception, after all the Monte Carlo casino was bankrolled by a cardinal, and not just any cardinal, a cardinal who went on to become Pope.

When news of gaming and its newfound Mediterranean glamour reached England, the Victorian gentlemen of London, always eager to be on the front foot in matters of fashion, flooded to London’s first licensed casino. The great city’s answer to Monte Carlo was to be found amid the fruit and veg of Covent Garden (and why not, it worked for an opera house) in a former paper mache factory with an ornate façade added on to create the required sense of style. The building still stands today and is home to that stalwart of the Covent Garden dining scene, Christopher’s.

After twenty years and more of culinary service, during which time the restaurant became a favourite lunching spot for media moguls and West End impresarios, Christopher’s has recently reopened after receiving a thorough re-fit.

The building’s opulent new interior, designed by De Matos Ryan and created in close collaboration with Christopher’s owners, eschews the current climate of austerity and financial abstinence that has been a mark of recent times. The new sumptuous interiors hark back to a bygone era of glamour and revelry, which celebrate the ornate and exceptional character of the existing building, summoning up the atmosphere of heady decadence the building has embodied since Victorian times.

In creating sumptuous interiors De Matos Ryan has evoked the real and imagined history of the building. The new Christopher’s comprises three distinct areas for drinking and dining; a ground floor Martini Bar offering cocktails and informal dining, an elegant dining room on the first floor and a club room for private events on the lower ground. Each of these spaces has been characterised whilst establishing a clear tonal and material palette continuity throughout. The entrance hall sets the tone with its charcoal grey walls, restored marble floor and domed ceiling highlighted with warm silver ornament.

The Martini Bar is conceived as a theatrical and atmospheric drinking parlour, with a palette of materials expressing the rich patina and alchemy of cocktail mixology. The double height space is dramatised by a 6.6 metre long onyx sharing table leading up to the main focal point of the room, a gold mirrored and brass-clad bar. Bottles are displayed against a faceted smoked gold mirror backdrop cut with the repeat abstracted motif of a martini glass. Light levels are kept deliberately low with a dynamic installation of suspended Delightfull Coltrane tube pendants, sculptural lights hung at varying lengths from adjustable magnetic cable, animating the gold mirror backdrop. Coltrane Wall Lights by Delightfull have also been used to excellent effect, mirroring the sleek pendants while adding a sense of modern creativity.

The dining room is located on the first floor and comprises two interconnecting rooms. Diners arrive via a grand spiral staircase, dramatically lit by three large glowing faceted pendants by Serge Mouille. In contrast to the Martini Bar this is a much brighter space with expansive windows overlooking London’s Theatreland. The classic contemporary two-tone grey panelled walls are framed by a theatrically lit silver gilded ceiling cornice. The cornice is reflected in antique mercury mirrored panels and accented by flashes of warm gold velvet in the predominantly grey leather upholstery, a look designed to maximize magnificent views across Waterloo Bridge from the smaller dining space. Slender black metal wall and ceiling lights, again by Serge Mouille, a company well known for angular, insect like fixtures that often feature several arms, punctuate the two dining rooms and complement the dark tones of the painted timber floor, allowing the original architectural features and the food itself to take centre stage.

The Club Room for private events is concealed within the basement and is accessed by a discreetly lit reconditioned former service staircase. The stairwell space is impressive, the winding stone stair and wooden banister meshing well with the original tiling in the lower hall. The Foscarini Plass feature pendant, which rests perfectly in the open space between ceiling and stair, adds a touch of modernity.

The dining space is classic and restrained with mid-century inspired pendant and floor lamps. Mirror lined walls give the illusion of greater space in this more intimate setting and a ‘gold nugget’ polished brass bar adds drama. Delightfull Sinatra pendants and a floor lamp with bespoke shades are also featured. The sculpted Sinatra floor lamp, fittingly named and placed in the former casino, a setting in which the fixture’s namesake felt most at home, is a sculptural brass creation with three dark red aluminium shades on three movable arms, adding a versatility, which allows the lamp to be easily integrated into any natty space.

The new Christopher’s achieves a sensitive balance that is difficult to accomplish, the interior offers a thoroughly modern look whilst summoning the glamorous memories of the building’s past.

@archiproducts_awards winners have been announced!