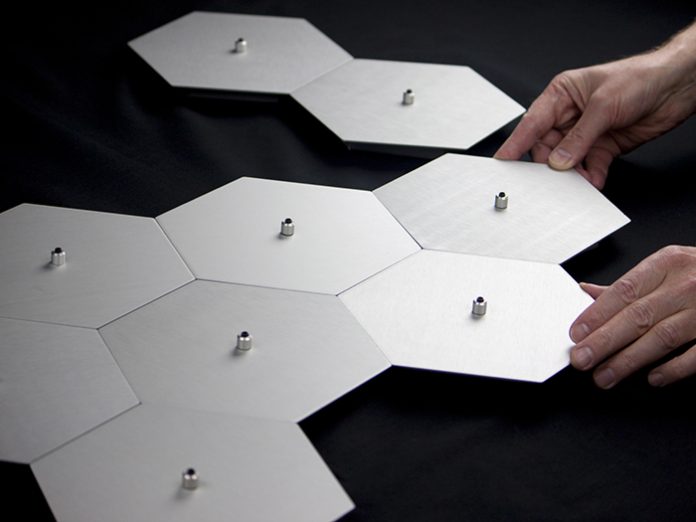 The diamond is on-trend with new polygonal shapes appearing in the interiors market. Archilume took its cue from emerging elements in interior finishes and wanted to complement them with a ceiling surface-mounted option for interior designers using decorative LED lighting.

“Currently designers choose wall and floor tiles. We’ve taken it a step further by including elegant, configurable tiled canopies for our pendants, so designers can include design elements on the ceiling plane as well,” said Archilume founder, Saleem Khattak.

In 2016 Archilume introduced its proprietary Configurate Canopy System with their inaugural hexagonal-shaped canopy. The canopies have a clean, reverential feel. The new diamond-shape feels decidedly modern, the points adding drama and dynamism, while creating tromp a l’oeil, Escher-like effects.

Configurate’s shared-edge design allows surface-mounted electrical connection between each module. Simply, yet elegantly, the system begins with a symmetrical, geometrically-shaped mounting and canopy plate that attaches to the ceiling to suspend one of Archilume’s original luminaires, or the Aura and Alto pendants.

Repeating the modular unit along its shared edges allows designers to create unlimited tiling configurations. Individual pendants transform into elegant, constellation-like chandeliers. Linked together, the configuration connects to the relevant number of remote drivers. The inherent modular nature of the system allows for ease of change by adding or removing modules during the design or installation stage.

Other qualities expand the system’s flexibility story. Cable suspension lengths are designer-specified and field adjustable to be consistent in length for a uniform appearance or of different lengths for a staggered aesthetic.
The standard canopy module is constructed of clear anodised aluminium, but other anodised finishes can be explored for a more bespoke solution.

Configurate canopies create value-added design and as standard product, they are cost effective and require a shorter lead time. The product also seamlessly teams with Archilume luminaires to create a captivating dimmable LED lighting experience without being complicated. Coherent as an individual pendant or grouped as a chandelier, the system ignites the imagination to create installations, from simple and under-stated to dramatic and impactful.