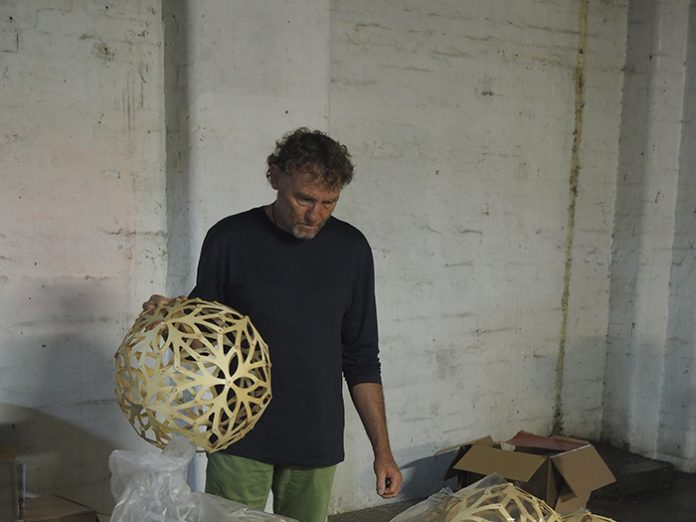 Some people, whose house has been burgled, say that it feels like they have been personally violated, that a part of themselves has been ripped out. I felt like this when I first saw photos from the Hong Kong Lighting Fair, of the Lightingbird stand full of my lights. Those people proprietarily standing in front of MY lights were blatant thieves who had the gall to display their stolen goods in public. I wanted to rush over and tear down the ugly fakes – to stamp on them, right there in front of the crowds. OK, so this is an emotional response and it is probably not acceptable in today’s commercial world, but it is too easy to forget just how much our designs are actually a part of us, and the implications of such a relationship.

Later I did have the unpleasant satisfaction of publicly jumping on a lot of fake copies of my lights, which were sadly only a fraction of the total that we have taken out of circulation. It was ‘unpleasant’ because I hate waste of any kind, even if the goods are illegal. It hurts me that the planet’s precious resources have been so unnecessarily squandered for quick and reckless profit. And therein lies the crucial difference between my manufacturing operation and that of the copyists: I care enormously, whether it is for the environment that supports us, or for the people on whom I have an effect, even for future generations. I am prepared to spend more money on better materials if they are environmentally cleaner, to fit air filters to reduce air pollution, to use FSC cardboard and only biodegradable plastic in packaging, to ship kitset to reduce freight to the minimum, to give those who work for me the best care I can, and so on.

Not so the copiers, who couldn’t care less about any of these things – the only thing they care about is profit . . . At anyone’s expense: mine, their countrymen dying of respiratory disease from their pollution, or the right of future generations to the bounty we have enjoyed. They will use the cheapest materials and packaging, not the most sustainable; they will operate unfiltered and dangerously unprotected machines, and their workers will be paid as little as possible. We have seen one of their lights and it was badly made, with plywood too thick so that it sometimes broke rather than bent, a boxful of abominable polystyrene and uncertified electrics, making it potentially dangerous to the user. We questioned the importer about this, saying our electrician was reluctant to connect the light, only to be told: “Find another electrician!”

I have zero sympathy for the callous and devious companies who steal others’ ideas and strip them of all value in order to be able to market large volumes of trashy consumer goods. And I don’t have much more sympathy for greedy consumers who buy this stuff, asserting their right to cheap goods, without any care for where they may have come from, or any damaging effect they may have. They choose to ignore the reasons why my lights may be a little more expensive (though actually cheaper in the long run) or the fact that copies are fake and illegal. We have tried to stop the manufacturers in China, but the whole corrupt economy protects them, while they lie repeatedly to us about ceasing. So now we concentrate our efforts on those who import into our markets, in countries that have more respect for IP. Generally this works, but it is a constant and frustrating drain on resources, a leech sucking out some of our lifeblood.

Another conveniently ignored aspect of the copying economy is the way in which it hurts the design industry by shutting out the next generation of designers. There are too many stories of young designers seeing their designs being offered in production only six months after they first exhibited them at a trade show. One friend of ours told us that a hotel chain had asked him to drop the price of his lights for them, or else they would get them made themselves in Asia! It is extremely difficult and expensive for young designers to get a new idea into production and market ready, especially with the heavy up-front certification costs required for lighting. They are defenseless and there is no way they can afford to fight the copiers, so they end up giving up altogether, which is everyone’s loss.

I think we have to be much more open and outspoken about this industry of theft. The more it is exposed, the more those who support it will be shamed. There is nothing clever about getting such an apparently cheap bargain; there should only be stigma. Like someone being caught wearing a ‘fake Rolex,’ it makes them look worse than if they had no watch at all. If cheapskate companies wish to persist in making shoddy, polluting goods for gullible consumers, there is no way – for the moment – that they can be stopped. But they do not have to steal my designs to do it. And if they do, I will fight them and, as a number of companies will attest, it will cost them tens of thousands of dollars.