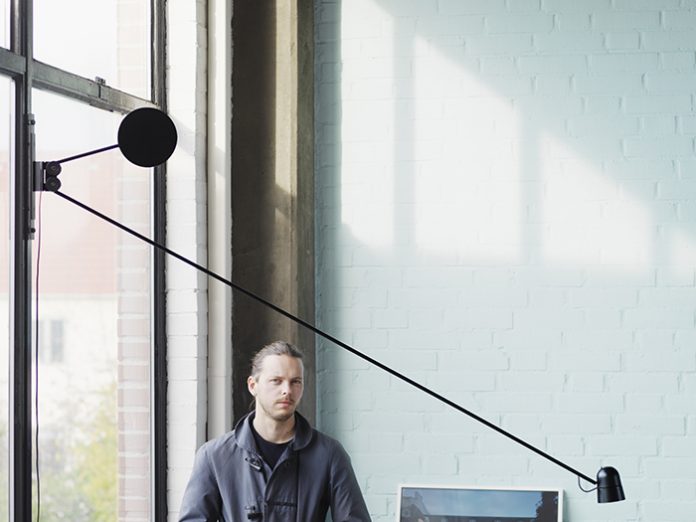 Approaching design through the eyes of an inventor, Norwegian designer Daniel Rybakken explores light in all capacities, from its subconscious effects to the mechanisms of his task lights for Luceplan.

Since his youngest days filled with dreams of becoming an inventor, Norwegian designer Daniel Rybakken has explored an interesting relationship with Scandinavian light that drove him to his recent creations.

Raised by a fashion designer mother and graphic designer father, Rybakken sees himself as some kind of amalgamation of their careers and his own dreams, as he tells darc: “I guess if you add design to being an inventor, that’s what industrial design is.” Rybakken grew up in Oslo, where he went to the Oslo School of Architecture. He went on to study at the School of Arts and Crafts in Gothenburg, Sweden, where he completed his Masters degree in design. Rybakken started working with light in his student project ‘Daylight Comes Sideways’, after which he went on to explore the potential in recreating the subconscious positive effects of daylight.

‘Daylight Comes Sideways’ started in a room in his mother’s house into which shone an inspiring stream of natural daylight. “Being in Scandinavia, it gets very dark by three or four o’clock. That’s why I started designing lamps really. I was able to recreate the light of this room by putting some fluorescent tubes behind the curtain to give the effect of the light coming in from outside. Subconsciously, it extends the space and you feel connected with a space that is larger than the physical one you are actually in.

“These were much more conceptual than my recent works. In a way, it was a criticism of how light can be designed today, which is basically a lampshade with a light source in the centre.”

Starting his own studio in 2008, Rybakken began to explore the field of lighting design in a different way. “In the field of lighting, you can invent whatever you like,” he tells darc. “You’re not restricted by all the norms of how something should look. Like a chair for example has to have four legs and if you do one with three or six, it feels kind of weird. We’re used to seeing that typology, but in lighting, some lamps have three legs, some have none. You have a lot more freedom.”

Rybakken’s collaboration with Luceplan started with him wanting to design something more industrial, something that was about mechanics. “That’s something I’ve always been interested in, whereas my earlier work was more abstract and diffused. I wanted to do something more hardcore, mechanical.”

This perspective can really been seen in the Norwegian artist’s Counterbalance task lamp, his first project with Luceplan, which holds a mechanical and industrial personality. Aiming to make a large wall-mounted lamp with a very graphical appearance, Rybakken counterbalances the weight of the head using a mechanical movement in a very direct and honest way. “Counterbalance is meant to illuminate a specific surface with a strong, even light. This is very different to something like the Stochastic chandelier for example which needed something more ambient to give the chandelier a more atmospheric appearance.”

Counterbalance went on to inspire another project for Luceplan, a table lamp called Ascent. “When we presented Counterbalance, I was envisioning a library or a restaurant filled with that light,” says Rybakken. “But what about the tables or desks further than two metres from a wall? This was the starting point when designing Ascent. The light ended up with a truly unique way of dimming the light; when pushed downwards, the light cone would increase and the light would dim down. For me, this action feels so natural, even more so than the ordinary dimmer switch.”

Demonstrating the elements necessary to consider when designing task lamps, Counterbalance and Ascent have the same proportions and head size, but Counterbalance is much taller, measuring approximately 180cm. Counterbalance also doesn’t feature the same dimmable function when the head is moved up or down, illustrating the necessary difference between the two to suit certain types of spaces and tasks.

The tangible purpose of Counterbalance as a task lamp and Rybakken’s pull towards industrial design runs deep through the product into the choice of material as well. While his Scandinavian industry comrades may tend towards wood as their preferred material, Rybakken didn’t feel that to be an option in designing Counterbalance. “Wood isn’t really my material. I might be the only Scandinavian designer that doesn’t work with wood, but I don’t come from that background. I like to work with what I call dead materials, like steel and aluminium as in Counterbalance, because I can control it. I have a precision that I don’t have with wood, but I think that’s because I don’t have the knowledge. I don’t think of myself as a craftsman in that sense.”

With an intuitive understanding of product design and his own capabilities, Rybakken’s creations demonstrate the level of critical thinking and awareness necessary to understand what needs to be created and how a product is best executed. His attention to detail is what defines his task lights, creating the essential difference between Counterbalance and Ascent. This is a deliberate, considered difference to suit the needs of different tasks and bring nothing but comfort and ease to its users.