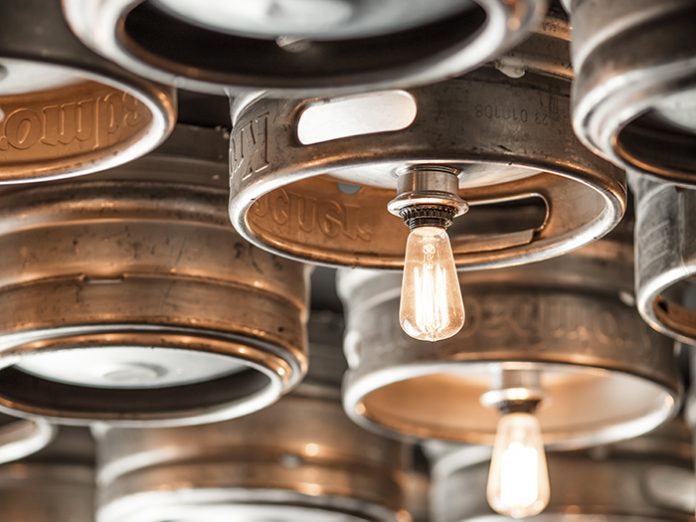 Das Bier in Montreal, Canada, is a place for beer lovers. Having taken over the premises of a former show bar, an industrial style German ‘bierhall’ concept has been implemented by Humà design + Architecture, featuring key design elements such as large round chandeliers, large communal tables, and lockers for the Bavarian beer mugs.

Humà’s first job was to open up the space, composed of three buildings with three different ground floor levels, to create one single large hall. During demolition a number of original materials were exposed and layers of the building’s history were revealed, which Humà was keen to make the most of. Features including terrazzo floors and a stone façade have been brought back to life with the warmth of wood walls and the sobriety of crude steel elements, enhanced by a contrasted black and white palette to heighten the mood.

“We had issues with their construction of course,” said Humà’s Mathieu Turgeon. “Initially, we asked for a diameter of 2.7m but the craftsman told us the largest diameter possible on his curving machine was 2.4m, so we had to make them a bit smaller. As it turns out we are quite happy with their size as they are a perfect fit for the space.”

Fixed to two large beams that now cross the open space, while the chandeliers aren’t totally centred over the communal tables, as guests enter, their attention is drawn to them, so placing them in the centre of the black beams gives a sense of symmetry to Das Bier. The language of the chandeliers continues throughout the space, including the exterior overhung façade and the internal steps that transition between the different levels inside the space – all made of crude steel.

“One of the client’s demands for the lighting was to be able to create different atmospheres with just one touch,” continued Turgeon. “The lighting had to be able to be dimmed during the night as well as be bright to announce closing time and help the cleaning team. As the space was initially composed of three distinct buildings covering 3,000sqft, this didn’t make it easy. All the electricity had to be redone so that we could work with a central dimming control panel pre-programmed to create different moods.”

Although there are a lot of windows at Das Bier, it is a bar that opens late in the afternoon so Humà had to work mainly with artificial lighting to create the right ambience. The design team did however use the windows in another way, enlarging them to create picture frames for people walking by to see the action inside. “The central large tables put people upfront in the space and that’s what you feel as you pass by,” said Turgeon.

Discussing the brief with darc, while initial plans didn’t change all that much over time, the client did ask Humà to incorporate new things into the project, mostly beer promoting elements. With access to free beer caps and aluminium beer kegs, they were incorporated into the design, as Turgeon explained: “We worked closely with the general contractor DVA entrepreneur généraux, to find ways of building the ideas we had on plans. We’ve designed the restroom’s entrance wall with a composition of 7,500 white and gold beer caps assembled into a pattern that reflects light and shines through the space. In addition, the ceiling in the VIP lounge is made of an assemblage of aluminium beer kegs cut in two on which we’ve added lighting fixtures, bringing down the ceiling for a more casual effect.”

With the chandelier and keg lighting fixtures firmly taking centre stage at Das Bier, Humà decided to complement them by gently lighting the walls with a curved rod black matte fixture. Working with the Boreal model from a local lamp design studio called Authentik Lighting, the copper interior of the fixture provides a warm lighting effect.

Reflecting on the project, for Turgeon one of the major success stories is the chandeliers, telling darc: “We are amazed by how close to our initial design the big chandeliers are. They are a key feature of the space and the fact they are custom handmade makes them even more impressive. The space within Das Bier is mainly wood panelling and a lot of black and white, so the lighting had to be really warm to create a cosy atmosphere.

“Deciding to custom design almost everything from the tables, the banquette, all the millwork, all the steel work across both bars and specifically the lighting fixtures made this project really different for us,” continued Turgeon. “We rarely design lighting fixtures so our main concern was to see if the effects we wanted would work – if the light would travel through the perforations we designed and mostly, if it would provide enough light on the tables where people would be eating, drinking and dancing.

“We didn’t have the budget or time to create a 1:1 scale model of the chandeliers so we had to make estimates and listen carefully to the advice given by the craftsman and general contractors we worked with. In the end I feel we accomplished something truly outstanding.”

Thanks to a flexible working relationship between all parties involved, the residents of Montreal now have a warm and inviting space to partake in their favourite German brew.