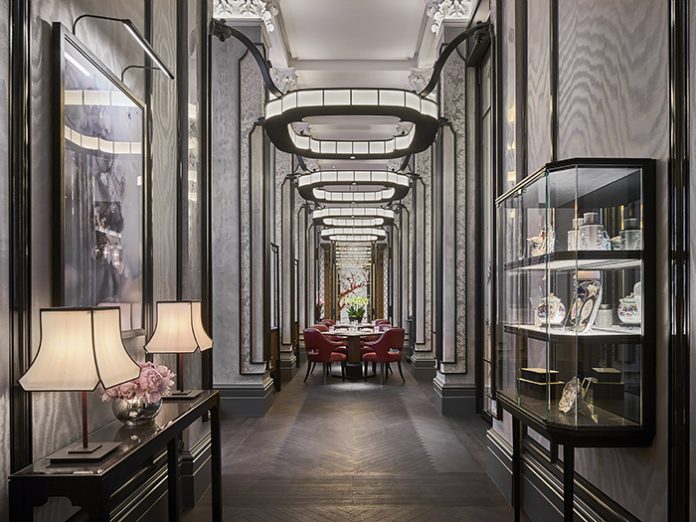 Following the successful launch of Four Seasons Hotel London at Ten Trinity Square earlier this year, the hotel has now opened its doors to Mei Ume, a Japanese and Chinese restaurant.

Demonstrating the part that both cuisines play in the concept of the restaurant, the name Mei Ume is inspired by the Chinese and Japanese terms for plum blossom.

Overseen by Hong Kong-based designers AB Concept, the interiors of Mei Ume work harmoniously with the stunning architectural features of Ten Trinity Square. “We were approached by the owners, Reignwood Group, who we have known for quite some time,” Ed Ng, Principal at AB Concept and lead designer on the project, tells darc.“The project scope was for an Asian restaurant, so Reignwood felt we would be the right candidates based on our work in Hong Kong and that’s how we began the discussions. It took us around two years to complete. As soon as we started working, we realised that we shared a lot of similarities and commonalities in terms of design. Hong Kong’s architectural and interior design professions are pretty much based off the British system, so it almost felt like we were working on a project at home, we were honoured to be working on such an iconic heritage building, to bring in very Asian inspired elements and merge it within a western architectural context.”

The Mei Ume Bar is a focal point for the restaurant, with a pavilion-style design featuring sleek custom lighting and glassware. Ornate pillars run through the centre of the room creating a subtle division between the ten-seat bar and lounge area and the 48-cover dining room. Suspended between the first two pillars as guests enter the restaurant, is a panel featuring enamel paintwork on glass, inspired by Chinese and Japanese plum flowers – fusing the two worlds into one as a common language. At either end of the main dining room, unique three-layer gilded artworks depict a traditional Chinese banquet scene while a palette of bold reds and pinks enhance the vibrant restaurant and bar – separated by a large embroidered silk lace panel. A private dining room seating up to fourteen guests provides a more intimate space for private dinners and events.

“The designers produced a strong interior concept within this magnificent heritage interior,” explains Ian Clarke, Associate at dpa. “Due to the considerations related to the historic architecture, the fabric of the building was to remain untouched with all lighting integration to be reversible, the ceiling was also off limits so decorative lighting was the key to the success of the scheme.”

Bespoke lighting elements were designed with ambient light sources concealed inside, while discreet, functional downlighting provides ambience to the tables and subtly highlights the interior’s details.

Only the most considered and delicate of interventions were achievable in terms of lighting. Metal structures were designed to adorn the interior in a way where lighting could be incorporated without the building needing to provide locations to house equipment. The two rows of columns in the centre of the space proved an issue, but still wanting to add drama; a halo inspired by celestial clouds was added and attached to each column, helping to lower the ceiling height to a more intimate level.

The outcome provides an elegant Asian aesthetic to the detailing with the integration of localised lighting in a creative and unique way.

“On this particular project, I think decorative lighting plays an extremely important role because it’s a heritage building,” Ng says. “When we went to the site for the first time and learned more about heritage architecture from the professionals, one thing that was brought to our attention was that architectural lighting such as downlights don’t belong to this era of architecture. We felt that we should follow and respect such norms when designing the lighting scheme, so we tried to minimise the use of architectural downlighting unless it was completely necessary, which is why decorative lighting became the major light source for the entire interior.”

“The decorative lighting elements were developed as bespoke solutions with specialist manufacturers,” adds Clarke. “Lighting equipment was integrated within decorative interior detailing to provide high quality lighting without the use of standard architectural lighting equipment.”

The space relies heavily on the lighting to create a sophisticated, nostalgic atmosphere in the day and a relaxed, seductive feel in the evening.

“It is crucial for us to collaborate with a high calibre and competent designer on every project,” explains Ng. “Restaurants and bars are no longer places to just eat and drink, they’re experiences where lighting has a strong influence on the entire mood.

If you can imagine that the chef has spent so much time and creativity on making a dish tasteful and beautiful, it’s important for lighting designers to showcase their art. If a restaurant is poorly lit, we wouldn’t be doing justice to the chef or the diners.”

The final installed scheme achieves the goals of the initial concept completely. “This project is a real credit to the owner and project team for their commitment throughout the project,” continues Clarke.  With Ng concluding: “I sometime still mix-up the final photos and computer renderings that we presented to the client because they look so identical.”