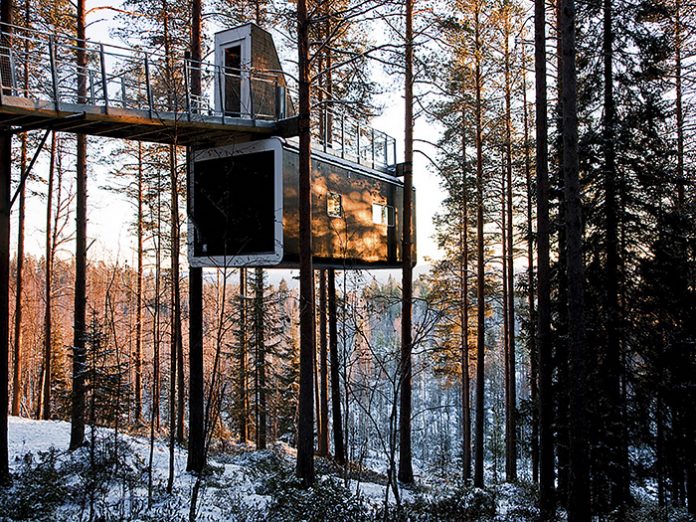 Offering a unique hotel experience, Treehotel in Harads, Sweden, offers tree rooms with contemporary design in the middle of unspoiled nature. Owned by Kent Lindvall and Britta Jonsson-Lindvall, the hotel is situated near the Lule River and as guests arrive they embark on a stroll through the beautiful natural surroundings before arriving at their ‘tree room’, where they get a fantastic view of the Lule River valley, miles of forest and the powerful river itself. Suspended four-to-six-metres above the ground, since it first opened in 2009, Treehotel has grown like a jigsaw puzzle, with the most recent addition opening in January this year. The new 7th Room is a collaboration between architectural practice Snøhetta and lighting brand ateljé Lyktan; having worked to a tight turnaround of just nine months, Snøhetta created a space that underlines the feeling of being inside the pine tree crowns of the forest, while making use of a lighting design concept that provides as much natural light as possible into the room.

Snøhetta’s Jenny Osuldsen tells darc: “Harads is located close to the polar circle with extreme light conditions. We wanted to create light fixtures that could cope with these extreme conditions throughout the year, providing artificial light that is dimmable and flexible in terms of direction; we maximised natural light through generous windows.

“We also wanted the design of the new light fixtures in 7th Room to feel as integrated in the architecture as possible and keep a real focus on the light and its functionality.”

Mirroring the 7th Room’s wooden cabin structure, with dark wood on the outside and light, warm wood on the inside, the lighting fixtures are made of two pieces of birch veneer with two strips of LED light. The black surface of the outside of the light fixture can be seen as a statement, focusing on the dark as the absence of light. A suspended light was designed specifically for this project’s lounge, along with new wall lights for the bedrooms. The other lighting requirements were chosen from ateljé Lyktan’s existing catalogue, with guidance from engineer partner WSP Sverige based in Lulea, Sweden.

“We designed prototypes for this project. The visitors, the maintenance team, and the client need to be able to see how they work over time. We are in the process of developing the prototypes into finished products and a second stage development version was shown in Milan in April. We hope to have a finished product by next year.

“One of the reasons this project really stood out was the height of the columns. They were a real constraint in the early stages as we had to make sure they could be executed on-site, leaving the forest and landscape as untouched as possible. Everything was built on site and the lifting of the building with two cranes was the highlight of the structural solution – it was the biggest challenge that was executed excellently on site.

“The other stand out features are the sixth façade, which is a photograph on the underside of the building, and the ‘net’ – an airy balcony net suspended around a pine tree that links the two bedrooms together with the Northern Light Lounge 10-metres above the ground.”

The beginnings of Treehotel takes us back to a fishing trip in Russia with a group of Kent’s friends, who also happened to be three of Sweden’s foremost architects – Bertil Harstrom, Thomas Sandell and Marten Cyren. Inspired by the film ‘The Tree Lover’ by Jonas Selberg Augustsen – a tale of three men from the city who go back to their roots by building a tree house together, Kent floated the idea of ‘designer hotel rooms’ in the middle of the forest, which sparked an interest among the group of architects. Before leaving Russia they agreed to design one room each, as friends working together, even though they were working for competing firms. This friendly collaboration turned out to be very important to the development of Treehotel and resulted in a UFO, a Birds Nest, Cabin, Mirrorcube, and a Blue Cone. These spectacular creations attracted a lot of attention and the large Dragonfly conference building was then added ahead of the 7th Room suite, which, as mentioned, was completed this year.

ateljé Lyktan was first contacted by Treehotel in 2009 to work with the architects on the various tree cabins; all of the products featured in these rooms are unique and were produced specifically for the project. Thomas Holm of ateljé Lyktan tells darc: “For the Mirrorcube, the Eagle pendant was designed in conjunction with Tham and Widegard; in Dragonfly there is the Cube in pendant and wall versions – designed in collaboration with Sami Riintala; in Blue Cone there is the Hangover floor and pendant fixture, this was designed by Thomas Sandell; and in The Cabin, there’s the Tipi floor and ceiling fixtures, designed by Marten and Gustav Cyren.

“For the Birdsnest and UFO rooms, architectural lighting was developed in conjunction with Bertil Harstrom, as was the Sauna,which features the Bikini ceiling light.”

Since the project, some of the lighting prototypes have been developed further and incorporated into ateljé Lyktan’s main range, including Tipi featured in The Cabin and Eagle featured in Mirrorcube. Architect Bertil Harstrom tells darc: “Treehotel was a small low budget project that worked because everyone involved was enthusiastic and wanted to make it work. The hotel rooms are all very individual and the challenge was to develop a design that was functional for each room.

“The clients, Kent and Britta are extraordinary, the architects involved worked on small budgets and the collaboration with ateljé Lyktan was based on the same conditions. In the beginning there were some doubts as to whether or not the project could be successful, but today Treehotel is well-known all over the world.

“Why? Probably a mix of good timing, correct eco profile, design and originality. Treehotel is proof that small projects in the middle of nowhere can be a good business!”

Treehotel gives people the chance to experience nature among the tree-tops, while also providing a uniquely designed housing experience. It is a place where nature, ecological values, comfort and modern design combine for an exciting adventure.