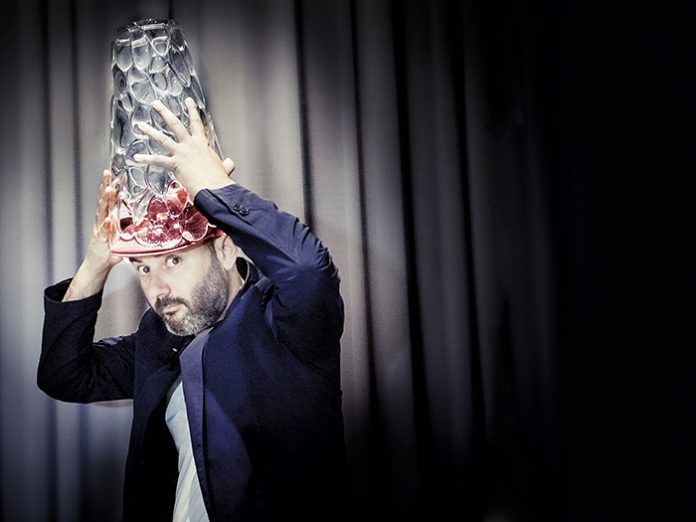 Having been crowned this year’s Maison et Objet’s Designer of the Year, darc caught up with Catalan designer Eugeni Quitllet to discover that sometimes, a ‘signature style’ can come in all shapes and sizes.

Catalan designer Eugeni Quitllet was exposed to a diverse mix of influences from an early age. Born in Ibiza in 1972, his creative identity was formed by all that descended on the island – from architects and photographers to musicians, writers and more – all with their own philosophies and their own way of life.

Describing himself as a ‘Disonador’, a Spanish contraction of designer and dreamer, Quitllet first witnessed a rural stretch of Ibiza’s beach become an informal hub for ultra-modern electronic music, before “growing up” in Barcelona, where he studied interior architecture at Llotja Art School.

“I quickly realised I was more captivated by product design,” he tells darc. “I was doing a little bit of this, a little bit of that, all at the same time, so I decided to focus my attention on one area. I started to look outside of Barcelona and even Spain, as to what was happening in the world of design. Barcelona was not the environment for me to create all the projects I had in my head as they were quite ambitious, so when I got the opportunity to meet Philippe Starck and show him my work, it was an amazing experience for me. We collaborated on designs for the next 10 years and this really made me grow up.”

Creating objects that lie somewhere between drawings and sculptures, mastering fullness and voids to reveal elegant silhouettes hidden in the material, Quitllet’s creative vocabulary surpasses the simple relationship between function and style. Out of his studio, which opened in Barcelona in 2011, he introduces new objects to the contemporary design scene, always with unwavering enthusiasm. His portfolio includes objects for numerous high-end international design brands and from the world of lighting he has designed the Flos K-Ray lighting fixture and Kartell’s Light Air range.

“The idea of light is a mystical one,” he tells darc. “There is something soulful about it. When you put light in to an object it automatically becomes magical. To obtain magic from a chair is much more difficult in the sense it is just a structure to put your bum on at the end of the day.

“A light is a magic box – it is something that is going to create an atmosphere in the room – all the reflections, the materials and so on. It’s a ‘non material’ material that you work around which is very nice.”

Having been crowned Maison et Objet’s ‘Designer of the Year’ in January for his Dream Catcher chair, Quitllet describes how the accolade has given him new confidence to move forward with his ideas: “It’s a great honour and I’m very happy, as it’s confirmation that everything I’ve been doing so far is ok… you know, I’m not doing too bad! I feel I can now explore new ideas even further.”

Talking inspiration… For Quitllet, it is about provoking an emotion to the user other than the function of the product. While of course, when designing, the function is the main consideration, it is about how this can be done differently while remaining beautiful – offering more than just a standard product.

“This is what motivates and inspires me to keep designing,” he says, “I still explore different ways to produce – different materials and techniques. When Maison et Objet gave me a space at the exhibition in Paris to showcase my work, this made me think, ‘well let’s do something new’ and this is how Dream Catcher was born. A chaise longue made entirely of aluminium, this was entirely new work for me and an opportunity to make a fantastic object.”

The hardest moment for any creative is when the ideas don’t come so easily – writer’s block as it’s known in the world of journalism. “When you don’t have an idea, you are dead,” says Quitllet. “You find yourself looking around for inspiration, hoping the idea will come. I have in fact discovered that inspiration comes from the idea, not the other way around.

“Once you have that initial idea, that is when everything else falls into place, you begin sketching, changing details, looking at the project from different points of view and so on… That is when you’re inspired.”

While Quitllet doesn’t consider that he has a ‘signature style’ he recognises there is a little bit of him in every object he creates. Yet he argues that it is more important to find a joint identity with the client – working with them to understand where they are coming from and what they are looking for – rather than impose his own identity on to the product.

“I give them a version of myself in a different material,” he says. “I always try to make a new product as if I’m starting from zero – as if I have no experience. I think about how I feel about the product and the needs of the client. I suppose this then becomes a ‘signature style’ but it’s almost a philosophical signature, because you’re searching for the perfect product or the perfect way to produce it.”

For Quitllet, designing is about putting the function of the product into a frame – every function is different and so is every frame. Referencing the Kartell Light Air range, he tells darc that the lamp sits inside the frame almost like a sculpture, that it is the surrounding areas that are being framed by the light. “Define what the function is and then put the frame around to accentuate it,” he says.

“This is why I choose my clients very carefully,” he says. “A product can take two years to be produced and you have to keep the relationship up with the client the entire time – so it is important you have those strong relationships from the beginning.”

Technology, as we already know, also plays a huge part in how products are developed – but all the technology in the world won’t necessarily result in the ‘perfect’ product. Neither will, according to Quitllet, solely relying on old school methods and designs where perhaps just the colour or material of an existing design is changed – it is about striking the right balance between the two.

“Using basic technology but not doing any research will not produce anything different, nothing will evolve,” he says. “Those designers that are mixing creativity with technology are the ones creating new, quality designs in my opinion.

“If I make a plastic lamp with Kartell, it is because we have the technology to inject the material into a perfect frame – meaning no welding is needed, you can’t see the lines of where it has been made – it is just magical, because you have this shape, floating in a transparent way.

“All the cables and everything required to make the product work are fixed in a way that couldn’t have been done before because the processes involved weren’t available. This means you have a product that isn’t focused on the technology involved but is telling the story of how it was made, it wouldn’t exist without the technology behind it.”

So what are the key elements of good design?

“Design today, more than ever, is the technology behind it,” says Quitllet, “but the human emotion behind it and the beauty of its quality is also very important. We have to put a lot of weight on the human emotion side of design because if it is a good piece it is going to be in someone’s life for a very long time. You want to produce something that is going to transcend through different times in that person’s life, as well as different trends – an object that reflects the changes in humans has to be a very strong piece.

“Iconic designs are there for a reason, they have stood the test of time and are still creating a positive message 50 years on – they are still as relevant today as when they were first designed.”

Aside from being crowned Maison et Objet’s Designer of the Year, there have been a number of significant steps for Quitllet leading up to this moment. Winning the Red Dot Design Award twice – for the Aedle headphones and the Kartell Masters chair, co-signed with Philippe Starck; as well as the Talents du Luxe et de la creation Prize for Innovation; and the Compasso d’Oro Honourable Mention for the Alias Elle chair. Having worked tirelessly to get to this point in his career, it is clear that this latest recognition of his work will fuel Quitllet’s desire to produce exciting objects that continue to push boundaries and evoke a sense of the magical.

“It is about the poetry of making an object,” concludes Quitllet. “When I design something; yesterday that object didn’t exist. Today we have the idea and tomorrow it will exist. You have to ask yourself, where was this idea? Where did it exist? As though the idea was already formed but just needed to be discovered…”