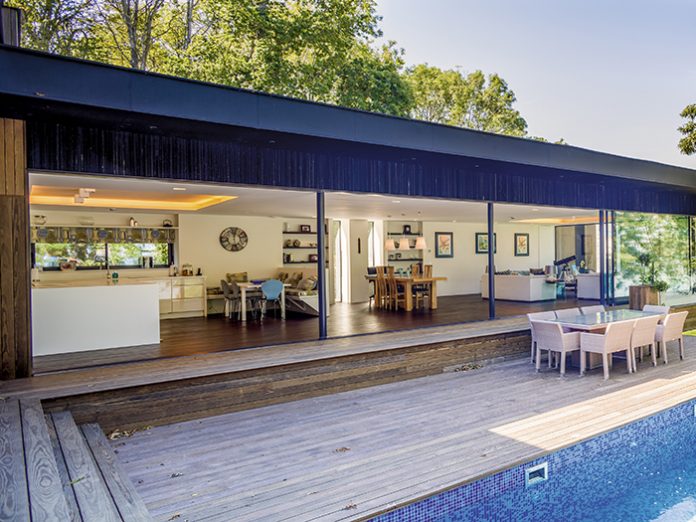 One of the largest houses ever to feature on self-build architectural television programme Grand Designs, Fairways house on the Isle of Wight comes alive under Light Partner’s illumination scheme.

Grand Designs’ Kevin McCloud was in no doubt about the significance of the nine-bedroom, 700sqm house built by Isle of Wight based architect Lincoln Miles for Bram and Lisa Vis. Aired on the British architectural design television programme in September last year, McCloud claimed the Fairways house as “one of the largest homes we’ve ever filmed… a powerful building.”

Tasked with illuminating the property was Frank Kelly of Newport-based practice Light Partners, who knew that the modern home required nothing less than an extraordinary lighting scheme to do it justice. With more than 230 Astro luminaires including trimless downlights, marker lights, pendants, shades, wall lights inside and out, this one-off beach house has them all.

Astro’s scope of supply ranged from small quantities of models such as the Ithaca pendant for over-table use, to dozens of Blanco recessed downlights, including round, square and angled varieties to suit the different spaces where they were fitted. In a few areas, the opposite approach was taken to the recessed downlight, using Astro’s Osca, which sits 140cm deep in the ceiling, creating a feature in its own right. Of nearly 140 downlights fitted throughout the property, there were just 22 standard, surface-mounted downlights, which were Astro’s Vetro luminaires in black.

Downlights were the main approach for the ceilings, with the exception of pendants for the kitchen and dining spaces and the dramatic, large Bevel semi-flush shades, which set an alternative tone in the huge games room. A number of Astro’s trimless luminaires were installed in the walls before plastering, allowing the light to sit seamlessly in the wall. This includes Borgo marker lights, which were used to create an atmospheric wash of light across the timber floors.

Plaster, a material favourite in Astro designs, featured strongly and was the main approach for wall lights in the living spaces and corridors. “Plaster is one of our favourite materials to design with thanks to the clean, sharp lines it makes possible,” commented Astro Design Director James Bassant. “It allows the lighting to make a complementary architectural statement which is particularly appropriate for the Vis’ stunning home.”

Plaster luminaires included 18 Pella wall lights, which project light above and below the fitting, acting as an architectural feature whether switched on or off.

For the exterior, Astro supplied six Arta Squares, finished in painted silver and twelve of the more subtle Elis wall lights. “For its variety and architectural vision, this stands out as a very special lighting project,” said Bassant. “We know that Frank Kelly and the Vis family went to considerable lengths to ensure the lighting was appropriate for the unique spaces created at Fairways. The end result is stunning and we are proud to have played a part.”