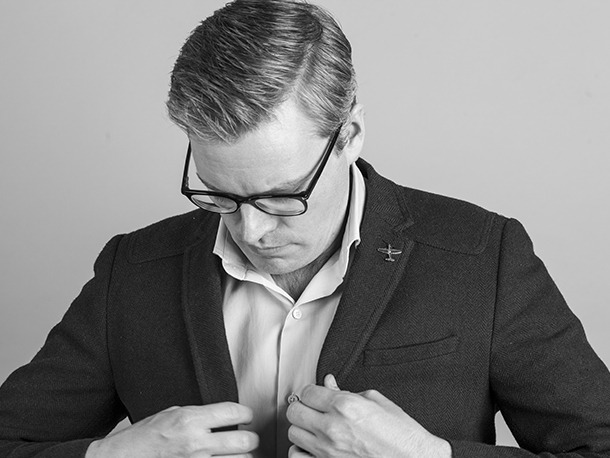 George Singer’s bespoke chandelier and lighting designs give his international clientele a taste for his conceptual thinking. Using all UK-sourced materials in his London studio, Singer is known for his objects of arresting beauty that allow materials to dictate the aesthetic without using decoration. As well as designing for a variety of London-based architects and interior design companies, Singer carries out installations in countries such as Switzerland and Dubai, amongst others.

Be it a residential or commercial project, Singer exhibits a thorough understanding of the space and the vision of the customer in his intelligent and sensitive designs, where the aesthetic of the chandelier brings a new form of contemporary beauty.

Singer was approached by architectural firm Gensler to design the feature lighting installation for the atrium of 103 Wigmore Street, just off Bond Street. The brief was to simply find beauty in a corporate environment. A murmuration of Starlings is a beautiful example of how individuals can appear to be one. Its sense of harmony and togetherness carries charm and elegance in creating a large organic entity which is constantly moving and evolving – rather like a large company. The installation was created using thin screen-printed stainless steel disks, each of which was fitted by hand. The distribution of the disks allows the installation to appear to move as you pass by, a subtle visual trick designed to emulate the beautiful movement of starlings. 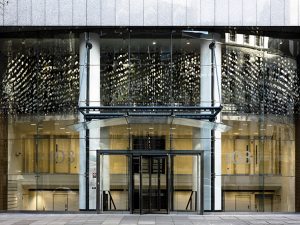 For the entrance lobby of a luxury housing development next to the river Thames in Chelsea, the Deco 3 was commissioned to introduce a sense of contemporary grandeur to what was previously a relatively bare and stark interior. The chandelier is a modernisation of the Deco 2 where the original globe lamp has been replaced by a bespoke LED light source. Designed in-house at the George Singer studio, Deco 3 throws light throughout the fluted glass tubes creating a more striking, modern deco aesthetic. 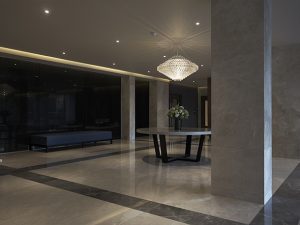 The Butterfly Chandelier, a three-story-long installation in the new Radisson Blu hotel in Dubai, consists of thousands of folded photo-etched stainless steel disks, screen-printed in a variety of shades of yellow and orange. The overall form, an abstract representation of a large swarm of butterflies, is designed to contrast against the strong geometric lines of the space. In a city famous for its skyscrapers, on the edge of the desert, the Butterfly Chandelier serves to re-enact the energy and elegance of butterflies. 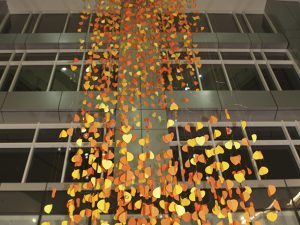 The Void Chandelier reflects all things beautiful in and surrounding Switzerland’s Lake Geneva; vast quantities of water, snow-covered mountains, and views of Mont Blanc and its glaciers. It is specifically designed to work well with the low ceiling of the beautiful lake-side house in which it is installed, providing feelings of safety and relaxation under a landscape of more than a thousand hand-made, fluted glass tubes, illuminated by fibreoptic spotlights. The shallow, bell-shaped void, generated by the varying wire-lengths, creates an aesthetic of lightness and anti-gravity. Like a block of ice, the person under the chandelier is responsible for forcing the glass tubes upwards and melting the ice to create the void. 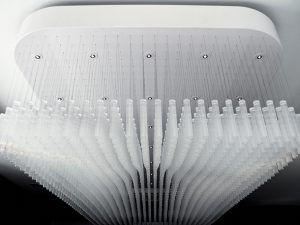 Commissioned by Conran and Partners for the entrance of the new boutique hotel, South Place, the Hurricane Chandelier introduces playfulness, Englishness, and evokes childhood memories. 100 solid polished aluminium Hurricanes, cast in Birmingham, are individually suspended to form nine different paths of flight, including swooping underneath the lamps and banking round in circles, narrowly missing the electrical cables. The hand-polished stainless steel ceiling tray, stitched together much like the wing panel of an aluminium aircraft, consists of three equal parts where the split-lines are reminiscent of a three-bladed propeller. 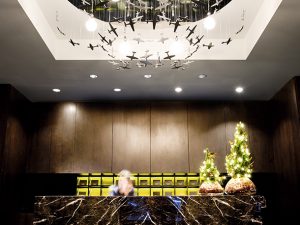