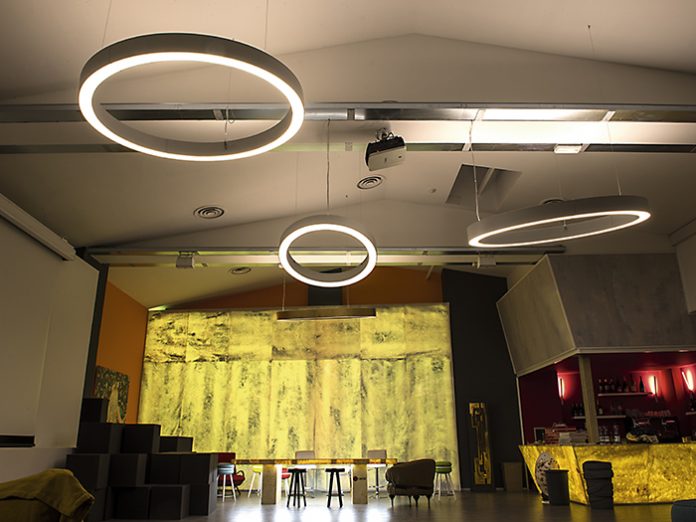 When Italian celebrity chef Simone Rugiati opened FoodLoft Milano as a multifunctional television and photography studio, he turned to Panzeri for functional yet decorative lighting design.

In any setting lighting is extremely important, but even more so in a television studio – such as the recently inaugurated FoodLoft Milano at the Factory House of Simone Rugiati – a popular Italian chef who has become famous thanks to his culinary broadcasts. The modern photography and television set offers a unique multifunctional setting in Italy dedicated to the world of food and beverage and with a little help from Panzeri lighting fixtures, oozes style and sophistication.

Curated by architect Luca Pieracci, together with Simon Rugiati – who fell in love with the Panzeri lighting range at Euroluce last year – the manufacturer not only supplied the project, but was involved in illuminating this unique space from the very beginning.

Located in a quiet area of Milan, the television set features the award-winning Panzeri Jackie task lights; Ypsilon lamps, which adorn the walls and are made of mirror chrome, a material obtained by treating brushed and polished brass that is then subjected to the chroming process; and Blanca and Willy pendant lamps that illuminate the whole kitchen area.

In the ceiling, hidden Brooklyn profile fixtures run through the living area to the more spacious loft, which houses one of Panzeri’s most prestigious products – the Golden Ring. With a composition of circles, all different diameters and angles, these large circular lamps are the protagonists of this part of the space. They have been finished on this occasion in gold leaf, which alternates with the white neutrality of the light. By using the Golden Rings in such a space as this, the flexibility of its redefined design is demonstrated; the product is in fact, just as well placed within a very informal and fashionable setting such as the FoodLoft Milano as it is in more professional and institutional settings such as offices and large halls within prestigious buildings.

During the realisation of the project, while Pieracci defined the structural elements and interior design of the space, lighting was completely assigned to Panzeri – both for the company’s lighting skills and stylistic-decorative choices, all while respecting the brief provided by the client.

The aim of the project was to use highly decorative objects that filled the vast space and given the television set’s size, it was necessary to provide significant lighting both direct and indirect, to illuminate the surfaces where the chef would be at work, but also use diffused lighting that could reflect on the ceiling and in the surrounding environment.

As natural light is almost completely absent from the television set, the need for artificial light was combined with decorative lamps and LED elements that can effectively illuminate spaces and integrate with the interior design, creating elegant and sophisticated atmospheric effects.

The main difficulty the space presented was from the entrance. The corridor that separates the gateway from the television set is very narrow meaning there are no electrical points on the walls, which in turn meant lighting profiles on the ceiling were necessary. Panzeri also recommended that the LED light sources used for the television set should be white, as opposed to RGB as initially selected by the client, ideal for lighting situations such as photo shoots and television filming which would be performed in the loft on a daily basis.

Lighting within the FoodLoft Milano plays a strong functional, yet decorative role. The Golden Ring circles work to fill the vast spaces of the loft, while the repetition of the Willy suspension fixtures creates continuity in the background. Lighting becomes functional with the use of task light Jackie, which is used to complete the most varied forms of cooking recipes. The key factor that guided every decision during this project was the constant search for quality materials with beautiful finishes. For this reason, the product selection required much more attention than a more traditional project might do.

Food Loft Milano is the first project in which Golden Rings have been installed after being launched at Euroluce 2015. The main challenge was to be able to deliver the first pieces just a few weeks after the market launch but ahead of the inauguration of this new location. Through this project Panzeri has showcased its lighting capabilities, not only as a manufacturer of luxurious products but for its skills in lighting design.