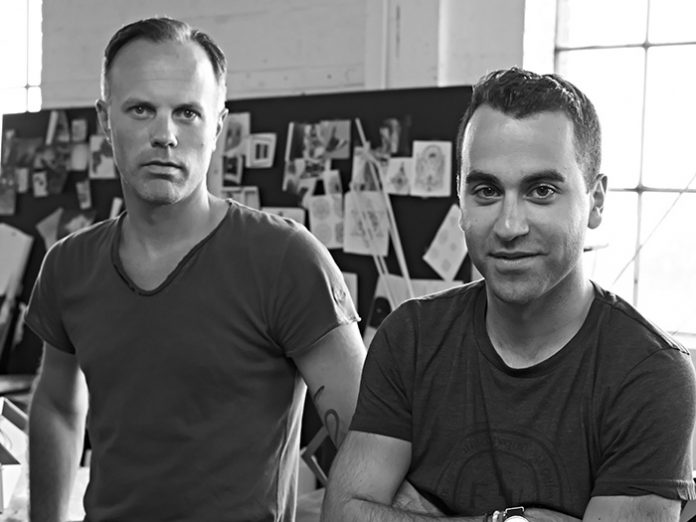 Brought together by a bond thicker than blood, Gabriel Scott is a Montreal-based design studio comprised of Gabriel Kakon and Scott Richler, brothers-in-law and creative partners. Scott Richler met with Femke Gow at the Triode gallery in Paris, France, to talk design, inspiration and medieval artistry.

Tucked away in the streets of Paris on rue Jacob, Scott Richler stood amidst his studio’s geometric creations in the Triode design gallery, reminiscing on how he and his brother-in-law Gabriel Kakon, both from Montreal, Canada, came together creatively.

“Gabriel and I have similar backgrounds, both having gone to schools of architecture. When I graduated, I had a bit of a departure from that and went into jewellery, which then became other types of accessories like handbags, and I eventually found my way back to furniture. At that time, Gabriel was still studying architecture and we started to work together around 2004.”

The beginning of a very bespoke line for Gabriel Scott, the duo began by creating one off pieces such as large tables, things that couldn’t be reproduced without huge effort. This went on for a few years until they decided to treat furniture more like Richler had been treating jewellery or fashion, as something that could be reproduced and distributed. “Around 2011, we changed the thinking a little bit and started to produce pieces that had component based productions,” said Richler. In 2012, the pair moved away from sculptural pieces to launch a contemporary line of reproducible lighting and furniture fixtures as Gabriel Scott, including the Harlow, Welles and Kelly lighting series.

Gabriel Scott’s first piece of lighting was the Kelly, with chains cascading down in clean lines, an angular geometry that is seen across their collections. “I think you could say that what really came together at the birth of Gabriel Scott was adopting the languages of the pieces we had done previously in a bespoke method and applying the same aesthetic. Our aesthetic always revolved a lot around steel and brass treatment. These kinds of details were always there from the beginning.”

Shortly after the pair established themselves as Gabriel Scott, they opened a flagship store in New York. Why? “For obvious reasons, because it’s New York!” said Richler. Having already developed a deep client base in New York, Richler and Kakon had collaborations and relationships with other designers and architects in the area. “We were doing tradeshows and a lot of people were asking, so we set up a store out of both desire and demand. There really was a lot of demand for it and since we’ve opened, I can only say good things. We’ve had amazing feedback and our business has grown tremendously. New York is not just an American city so we have exposure to international markets. The showroom is also an impressive space, so it speaks for itself. It makes you look like you know what you’re doing.”

Not only is it the space itself but the collections housed within the New York showroom that are truly convincing of expertise in thoughtful design and craftsmanship, oozing a mature understanding of design crafted out of the their varied experience.

“The Welles series was originally very sculptural, but was resolved in a technical way like a jeweller. We use a lot of the same techniques that we’ve used in the past. Some of our stuff is really very complicated, like blowing the glass for the Welles Glass, but then we try to resolve the details so that they can be machine made first and then assembled by artisans. You don’t have to be a jeweller to assemble them, but you have to be a very good glass blower to manage to get those forms.”

Gabriel Scott’s latest collaboration with London-based tattoo artist Maxime Buchi demonstrates the versatility of technique and stylistic detail that the studio includes in its work. Looking ahead to the launch of the new collaborative fixture, which was celebrated during London Design Festival at FBC London’s Francis Street showroom (turn to pg. 98 to find out more), Richler commented: “I had been following Maxime’s work for several years. At first I was drawn to the tattoo work, then I discovered and began to appreciate the nature of the whole cross discipline attitude that he promotes.” Buchi is very similar to Gabriel Scott in his approach to tattoos and line art, using the same style of geometric art in his refined aesthetic that could be described as a graphic modernist, scientific illustration of contemporary and classic art.

Buchi commented on the collaboration that seamlessly brought together tattoo art and product design: “Tattooing is before anything, a work in 3D. It has as much to do with space as with illustration. Working with the ergonomics of geomtry on the body to the geomtric quality and ergonomics of furniture was a step I always hoped to make and this collaboration made it possible. Scott understands my world perfectly and translated my ideas into objects with an absolute perfection.”

Modeled after the tetrahedron, a base element for all platonic solids, the varying line weights of Buchi’s drawings were interpreted in the varying thickness of the materials. The thin wires used to power and suspend the fixture juxtaposed against the thicker machined metal bars that create the inverted pyramid form relate back to Buchi’s work. The light source is located in the corners of the tetrahedra and are directed towards the hanging icosahedron in the centre, refracting and reflecting the light.

Richler commented on the development of this collection, a patterned version of the Welles Glass series: “You make a mould out of steel and then you weld it. The moulds have Maxime Buchi’s line and dot work inside, which leaves an imprint on the glass after it’s blown into the mould… And these moulds are big! To blow into them, you can’t actually lift them so you have to stand over them on a podium, or a stool, and blow. And there has to be two people, one to steady the mould and one to blow. The process of getting these kind of shapes is very medieval.

“I’ve tried to do it and I just can’t. To blow glass like that, you have to really push with everything. It’s a very physical process. Our glass is blown by an artisan in eastern Quebec who is from Czech Republic. He used to work for Lasvit and is one of the best.”

So with a background in jewellery, what draws Richler to bring the same attention to detail to the world of lighting? “Light kind of is jewellery,” he said instinctively. “In the same way that someone wears a jewel, a hotel or a home wears a light. It’s the piece that you notice when you walk into a room, for various reasons. It’s the only thing that floats. It’s the only thing in the room that really has an aura. It dresses the room.”

According to Richler, designing lights has no constraints. There are technical constraints to get a light to work but in terms of its form, it allows a designer to be very sculptural. “A coffee table has to be 17-inches high, or a chair has to hold weight and it also has to be able to have someone sit in it. You have to measure a person. There are more rules in furniture than there are in lighting. It really allows freedom of expression.”

As more and more people seem to be embracing this irreplaceable vitality of decorative lighting, Richler points out the danger of this phenomenon. “It happens in fashion as well, when shoes are really important to women one year, then bags, then jewellery. I think in terms of the interior design world, more indie designers have been producing very interesting lighting, which they weren’t before as it used to be dominated by Italian companies. The only danger is that it’s heavily saturated, so you have to be really special to stand out.”

Gabriel Scott’s designs set themselves apart by taking inspiration from anywhere other than designs within its own field. “I rarely get influenced by another piece of furniture or lighting,” said Richler. “It usually comes from outside of that. I usually see an interesting detail that I apply. For example jewellery designer Gaia Repossi who recently redid her Paris store with architectural practice OMA headed by Rem Koolhaus – it’s things like that, which influence me. Not in a literal sense, but it’s the subtlety or the detail in another medium, or something small in a piece of art. It’s almost always external, like the joining and wells and other details.”

This attention to detail is evident across the entire body of Gabriel Scott’s work, adding an element of intrigue to interior projects for which their products have been specified. Such projects include American department store Saks Toronto (March 2016), which features the Welles Long chandelier in blackened steel in the men’s department, specified by interior design duo Yabu Pushelburg for its sculptural quality and masculine aesthetic. This same fixture is also seen in Armani Chicago’s men’s store, completed in January 2015.

Elsewhere in the retail sector, the studio’s Harlow large chandelier in Alabaster white and satin brass is seen in the Bergdorf Goodman New York store (January 2015), and Century 21’s handbag salon in New York (April 2015). The pair have also worked with Yabu Pushelburg on several Four Seasons hotel projects including Toronto, Boston and Kuwait amongst others.

Gabriel Scott’s work holds history that lies in choices of colour and design intention while edging towards the future with its varying progressive forms. “Nothing we make is totally foreign, which is where the history lies,” said Richler. “Familiarity in anything is what is going to draw the person in, that little bit of what the work has in common with you, what is familiar to you, and what is new in it.”

Richler sees a recognisable style in Gabriel Scott’s work, indicating that the pieces come from one studio. They push the boundaries, all the while being aware of their audience and its needs. “We could be much more extreme and artistic in some way and create more sculptures, but we have to try to figure out what people want. We have to create something that people can really envision themselves having and knowing what to do with. So we take all that history and sensitivity and we try to make something fitting.”

In a combination of skill and natural instinct, Gabriel Scott finds itself at the forefront of what is current in design, without actually paying too much attention to trends. This is the mark of two true creatives who speak the same design language. Together, Richler and Kakon create that which appeals to the traditional using forms of the future to invite intelligent design into everyday life.