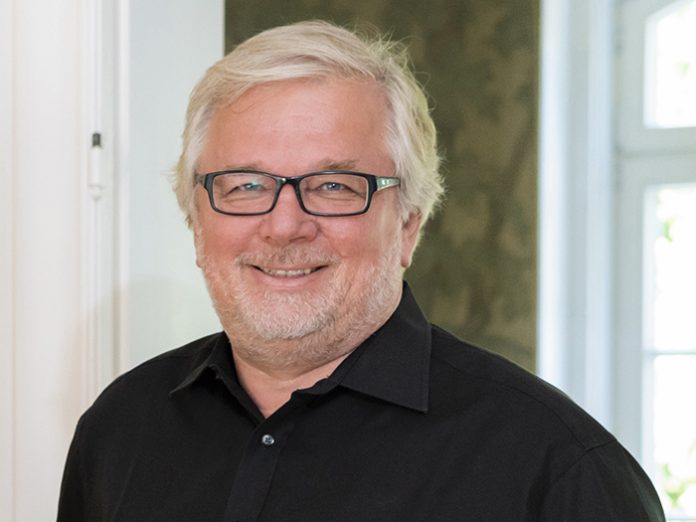 Hamburg’s Peter Joehnk, co-founder of award-winning design firm JOI-Design, sits down with Maria Elena Oberti to discuss the evolution of interior design in Germany and his steady rise to international hotel stardom.

“I grew up in two places in Germany. I was born in northern Bavaria, in a small medieval town called Kronach. Then, when I was about ten-years-old or so, we moved west to Neustadt an der Weinstrasse. That was also roughly around the time when I discovered interior design.

“My father was a big influence in the beginning. He was an engineer, but his real passion was furniture making. He was always busy making different types of furniture. He didn’t do it for money, it was purely a hobby for him. My first lessons in interior design were from watching him work.

“When it came to having to choose a career, I was very undecided at first. I was interested in craftsmanship and art, like my father, but was also aware that the life of an artist was an insecure one. So, I tried to explore some of my other interests. For example, I loved working on my motorbike. I was always trying to make it faster than my friends’. I decided to enrol at the university for mechanical engineering hoping to develop this hobby further. I quickly realised that tuning motorbikes wasn’t what they did there and promptly dropped out two weeks later.

“From there I decided to try my hand at interior design. I thought it would be a good compromise between my technical and creative sides. It turned out to be a perfect fit. I had never been a good student in the past. Then, in design school, I was suddenly a star student. I was very happy, it was exactly what I wanted to do.

“I began my studies in Kaiserslautern, in southwest Germany, close to where my parents lived. Then, I met a girl. She lived in Mainz, which is a bit further north. Girls were very important back then, so I decided to change schools and study in Mainz instead.

“After graduating, I moved to Hamburg – again following the same girl – to begin architecture school. I had to work alongside my studies to pay for tuition and, well, at some point it all became too much. I decided not to finish the architecture degree and instead went on to become a very happy interior designer.

“I moved to Hamburg in 1982 and opened my studio there two years later, in 1984. Interior design as a profession was unknown back then. When I told people that I studied interior design they were very confused. They’d always ask, “what can you do with that?” They thought all I’d ever do is work as a salesperson at a furniture shop.

“Instead, I was very lucky and found a job with a company that specialised in hotel design. I didn’t know it then, but that job would set the foundation for the rest of my career. I worked for the company for two years then went on to open my own practice. I started out like everyone else at first, entering competitions and working on small projects for private clients. Then, I got my first big project: a hotel for Pentahotels. I was introduced to the Pentahotels group through some British connections. It was a great moment for the studio, which at the time was just three of us. The hotel was a four-star hotel with 200 rooms in Lübeck. It was our big break.

“Our main office is still in Hamburg, only today it’s made up of 40 people. We also have two smaller offices in Munich and Mumbai. The Hamburg office is located in an old villa just outside the city in a residential area next to a big canal. I’ve always enjoyed working in Hamburg, the only downside is the weather. It’s very… British.

“I just happened to fall into the hospitality industry, it could have been anything else. Of course, a lot has changed since I started. Back then hotels were designed to be completely accident-proof. Hotel owners wanted to prepare for any kind of scenario. They thought that guests polished their shoes with the drapes. Everything had to be very functional.

“Attitudes have shifted since then. Residential and office designers now look to us for inspiration, not the other way around. There are still limitations, of course, budget being the biggest one. Everything you put into the design has to have a return in investment. This often means having to adjust your choice of materials, you can’t always spec everything you want.

“The project I’m most proud of is one of our latest, the Fraser Suites in Hamburg, which is housed in an old tax office building from 1910. The original building was very dark and formal, very Prussian. When you walked into the building, you felt like a small mouse. It was overwhelming. The British would call it royal, but in Germany we would probably describe it as fascist.

“We used light to offset the oppressive atmosphere and create a more cheerful environment. The main focal point is a playful crystal structure that cascades from the lobby ceiling. We designed it with a lighting designer, but it isn’t a lighting fixture per se. It’s more of an art installation.

“Design is always evolving, it’s never still. Especially in the hospitality industry, things move very fast, which means that designs can look out-of-date very quickly. To think that we used to have to put bottle openers and clothes lines in hotel bathrooms!

“Every trend develops a counter-trend. The only long-term trend that I see, which is really much more than a trend, is the sustainability trend. It’s not only limited to Germany, of course, it’s a worldwide trend. It’s something that we try to bring into all of our projects, but it’s still very often a cost issue.

“People have been talking about sustainability and sustainable design for years, but it has taken some time for the hospitality industry to really believe in it. Sustainability was used as a marketing tool in the past, but now things are starting to change, it’s on everybody’s mind. We aren’t running through open doors just yet, as designers we still have limitations when it comes to budget. When there’s a choice between a ‘green’ parquet that costs €100 and a vinyl plank that costs 20% less, investors still get weak.

“Business in Germany is very good. There are always ups and downs no matter where you are. We had some rough times in 2003, but we’ve only really had happy times since then. I think the design business is similar across Europe. Things have been difficult in Spain for the last few years, but generally design work has become increasingly more important in Europe.

“In terms of style, there are still nuances between us. You can see the differences, particularly in the colours and patterns. It’s difficult to explain, but there is a difference between Scandinavian design and, say, French or British design. We Germans are somewhere in the middle. I don’t think there is a specific German style, but whenever we appear somewhere, you know it. I think we are still seen as very technical.

“From a process perspective, there can be significant differences in design scope from one country to the next. In the UK, for example, the designer does the design and then hands over the drawings to a purchasing agent, whereas in Germany we have interior architects who oversee the entire project, from start to finish.

“The scope of the designer in Germany is much broader, we have more control of our projects. I prefer it this way, it also helps us learn from one project to the next. It can be especially beneficial for young designers to see what really goes on on-site.

“Things start to get very different when you go to places like Russia or India. Often, in these developing countries, clients want to appear very successful or rich, so they ask for designs that are overloaded with gold. They probably didn’t hire a German designer for those reasons, but at the end of the day, when you finally sit with them, that’s still the picture they have in their mind.

“Where is the design capital of Germany? Berlin. Hamburg is the centre of ship design, but Berlin is where the younger, crazy guys go. Things are starting to level out, though. You don’t have to go to Berlin to make it. Hamburg is very creative, but Berlin is bigger.

“In terms of design education, I think the best place to study in Germany is FH Detmold, which is where my wife, Corinna, went to school. It’s in a small city, but it has the largest interior design department in Germany at the university level. What makes it so good is that it has specialists of each kind teaching each subject. Lighting design is taught by a lighting designer, architecture by an architect, and so on. That’s what makes the difference in my opinion. Size matters in this case.”