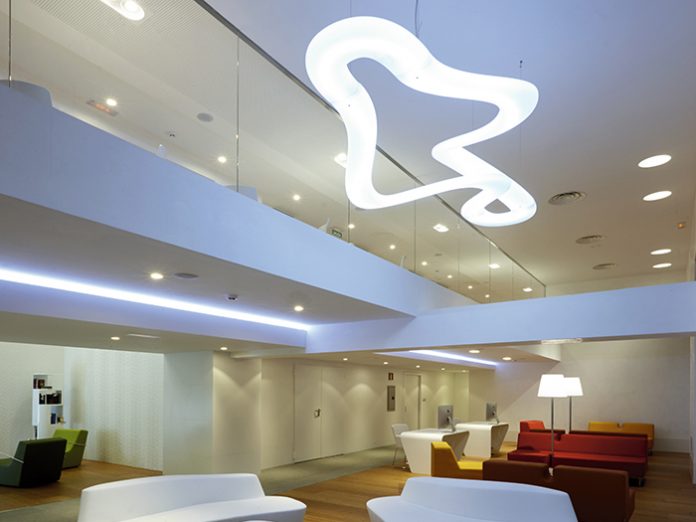 Well-versed in meeting the needs of living through practical and aesthetic furniture, Slide’s versatile designs find a combination of light and vibrant colour merging to create the distinctive atmosphere that is characteristically evident in Granada Five Senses Rooms and Suites.

From the beginning, Jose Maciá Alvez of hotel group Maciá Hoteles wanted to create a unique concept within hotel design. Working with architect Laura González Romero of Quintas Gonzalez Arquitectos, they held lighting and interior design as “inseparable”, and integral to the project. “The goal was always to create the element of surprise, awakening the sensations and emotions of the client. The building is a container of experiences,” commented Romero.

The Granada Five Senses Rooms and Suites was inspired by Granada’s heritage, culture and art. Each floor of the hotel offers a journey through the senses and sensations that a traveller can experience in the city; a smell, a feeling, a colour.  “It aims to offer visitors a new way to see the city, a journey through the possible experiences of Granada living. The hotel recreates the essence of the city,” explained Romero.

The decorative lighting throughout is of a playful nature, featuring soft shapes and white lights from Slide to create bright and purposeful spaces. In the common areas, the design concept involves the creation of large, open areas, “where decorative lighting plays a fundamental role in defining each room,” said Romero. Each lamp was chosen to invite a unique experience, with Slide’s Knot pendant and Ali Baba Piantana floor lamps greeting guests in the entrance hall in the reception, evoking the flow and circulation of the spaces themselves. This playful theme is continued throughout into the breakfast buffet area, which sits on a balcony peering over and down into the lobby, where the Knot pendants are then at eye level.

Granada Five Senses Rooms and Suites was a very collaborative project. The architectural team alongside Slide sought functionality, without sacrificing form and design: “We want to provoke reactions in the spectator and for this we must innovate, create and move away from the conventional design,” said Romero. “In Slide, we have found a true ally; its design is young and cheerful. We identified with them as they bring to our architecture the touch of fun that we’re looking for.”

Staying true to the playful nature that characterises the hotel’s design, the lobby’s adjoining lounge area features Slide’s Sirio star shaped lamps, evoking a starry night inside that is continued out into the courtyard, where Sirio lamps appear under the starry Spanish sky. Located in the fifteen metre-high courtyard, the Sirio stars are visible from the hallways to the rooms. Guests can enjoy a drink in the hotel bar, adjacent to the gym’s entrance, where  Slide’s Nuvola lamps are suspended over white bar tables.

Slide and Quintas Gonzales Arquitectos worked together to create a playful space that reinvents the way form and function can flow between rooms, and merge design and practicality. The result is a thoughtful hotel that stands out within its sector as a sophisticated, youthful design.