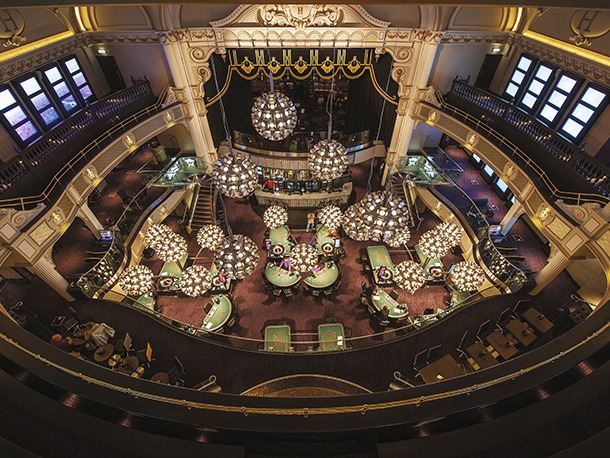 The launch of the palatial Hippodrome Casino on Leicester Square, right in the heart of London’s tourist district, ushers in what CEO and co-founder Simon Thomas believes will be a new era in British gaming.

“We will challenge the long-held conceptions of casinos in the UK as either too expensive for the normal man on the street, or tucked away in back alleys in the wrong part of town,” Thomas declared. “In fact we’re determined to not only challenge them, but redefine the way in which visitors to the West End celebrate an evening out.”

It’s a bold vision, but one made possible by recent changes to the country’s Gaming Act that allow venues to offer food, drink and live entertainment under one roof for the first time. The adoption of the former Hippodrome Theatre fits perfectly with this desire to create a high profile, inclusive entertainment experience. Originally opened in 1900, it followed designs by the renowned theatre architect Frank Matcham and initially operated as a circus variety theatre featuring swimming polar bears and acrobats who dove into pools from the fourth floor balcony. Later incarnations as live variety theatres and nightclubs all left their mark on the building, and these layers had to be stripped away before a whole-scale restoration of the site could begin.

The aim was to return the interior to its original glory. Following plans by architects Cadmium Design, the space was split into cocktail bars, restaurants, lounges, casino gaming floor, poker deck, VIP gaming, salle privee rooms, a cabaret room and a smoking terrace.

Lighting designers Into were brought in to illuminate the space in a way that would reflect the history and grandeur of the building. Key to the brief was the need for low maintenance and energy efficient lighting that could endure 24-hour use. Appropriate lux levels were required to provide a shadow- and glare-free gaming experience for players, whilst providing the necessary light levels for security cameras to closely monitor play.

LED lighting forms the majority of the general lighting. LED downlights from Lucent were used with a deep baffle to minimize glare to gaming tables. LED cove and concealed lighting from UK LED was used to illuminate key interior design features – coffers, bottle steps, bar nosing etc – whilst providing subtle ambient illumination to circulation areas. For the theatrical elements within the Cabaret VIP areas, care was taken to produce a subtle design that would evoke an exclusive five star customer experience.

Decorative lighting elements provide a final layer of opulence to the space. The entrance hall sets the tone for the entire venue with a series of Bead chandeliers from Innermost that deliver a golden metallic glow to the surrounding space. Inside the main room, rows of clear spherical fixtures hang from reclaimed pulleys running above the balcony areas that now house the bars and dining areas. Dubbed Crystal Rain, these pieces reference both the venue’s theatrical glamour and notions of Britishness – namely a stoic relationship to the occasional downpour.
The bar front in the main room is created using fibre optics that feed a multitude of crystal heads. Each head is set in its own individual tray with edges that catch the splay of light and shadow from the crystals. Above the first floor bar, Artemide LED Net Circle fixtures hang from the ceiling and are repeated in the surrounding mirrored surfaces.

All of the interior feature luminaires were installed with energy efficient Osram Energy Saver Halogen lamps. Halogen was chosen for its colour rendering properties and warmth of the lamps when dimmed.

Undoubtedly the venue’s lighting showstoppers are found in the main casino room where giant ‘dandelion clock’ lighting pieces provide a mix of fantasy and glamour. These bespoke pieces were constructed by Mike Stoane Lighting following a concept by Cadmium MD Paula Reason. They were inspired in part by an 1899 Daily News article about the reaction of the first visitors to the newly opened Hippodrome: “They walked around the new building astonished, puzzled and delighted, like Alice in Wonderland,” it reads. “Every now and then they had almost to pinch themselves to make sure they were awake.”

In addition to adding drama, the pieces also had to fulfill a variety of other functions, such as housing CCTV cameras, audio speakers and of course providing increased light levels to the gaming tables. Most of the spherical heads are mounted on curved armatures that are anchored into the ground between the gaming tables. By bracing them together in this way, stability is increased and movement is avoided – essential for the capturing of clear security footage. In addition to these, several individual pieces are suspended at different heights within the vast room, as if blown from their metal stems by a summer breeze. Their presence draws the eye up, prompting guests to admire the height and elegance of the space.

Each spherical head is constructed from clusters of individual lamp heads with simplified barn door fronts – manufactured to mimic traditional theatre par cans. These are attached in an array around a central ball. Though identical in appearance, the cans are fitted with either Cree LED lamps or LED AR111 replacement lamps, the latter used to provide brighter illumination for the tables. Where necessary, these par cans and their barn door fronts were designed to allow a degree of adjustment to enable the light to be precisely aimed.