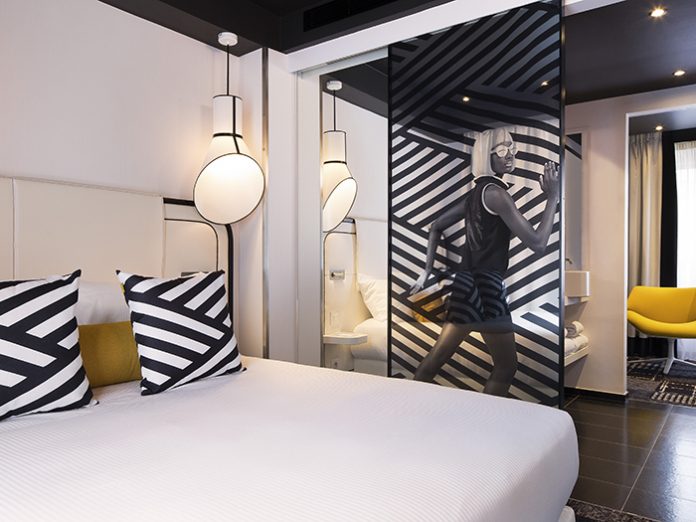 Hotel EKTA is a 60’s blast from the past in Paris, France; an abandoned office building transformed into an eclectic hotel bursting with character.

Known for his work across both residential and commercial projects, with hotels being is favourite, Nuel aims to capture the essence of a chosen era in his designs. Stojkovic is also known for her work on in the hotel sector, where her bold and playful interiors are reflected in the encapsulation of eras of her choice.

Working with hotel owner Nelly Roland, the collabroative project between Nuel, Stojkovic and Roland began with the idea of transforming an alternative office building into an innovative hotel. With the existing architectural style of the building typical of the 60’s and 70’s, and atypical amongst other architecture along the Champs-Elysees, the designers were set apart from the norm, ready to create an outstanding graphic design.

Stojkovic commented on her excitement on the collective project: “Artistically, the audacity of the project was an exciting challenge in revisiting the style of the 60’s and 70’s, and drawing on the work of French fashion designer André Courrèges. I was also very excited to work with Nelly Rolland, and the idea of a collaborative project with Jean-Philippe Nuel was really enticing as well. ”

The design team first explored how to transform an empty office space to accommodate the desired number of bedrooms for the hotel. The existing entry was removed and a new staircase was created with a high ceiling space. Each of the rooms house a carefully selected collection of decorative lighting pieces that stand as stylised features of the hotel’s design as well as functional lighting for the guests’ comfort.

The rooms are split into a bedroom space, bathroom and a small lounge area. Suspended next to each bed are Designheure’s Cargo suspension lamps casting a more general illumination, while Marset’s Ledtube reading light by Spanish designer Daniel Lopez are recessed in the headboard for more direct illumination.

“Lighting has a very important part in this project, as in all projects. It emphasises the interior design, the furniture and the detail in the iconography adorning the walls of Hotel EKTA. Each space is an atmosphere enhanced by light.”

Moving through the bathroom to the small lounge space by the window, Danish designer Arne Jacobsen’s Lampadaire floor lamp designed for Louis Poulsen stands elegantly and thin as a discrete yet discerning lamp.

Each of these products were carefully selected for their bold and unusual shapes, with black and white patterns and striking lines conversing between lamps and furniture drawing guests far back to a long gone time.