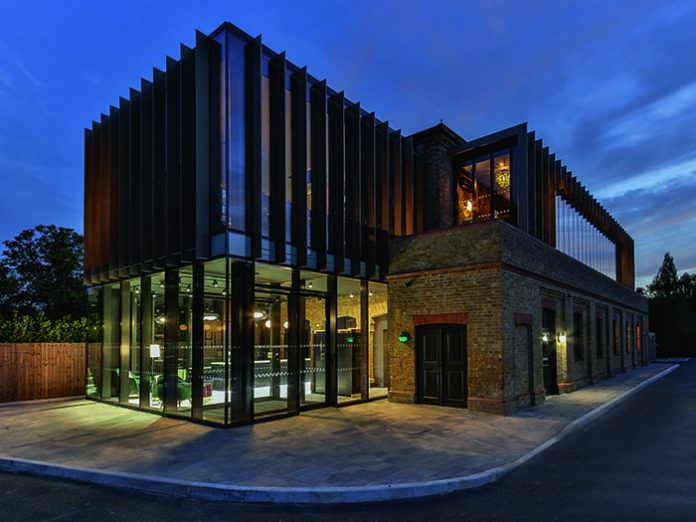 Manchester-based architecture and interior design practice 74 has completed a major project to extend and remodel a Grade II-listed, two-storey, Victorian brick building in a semi-rural location in Englefield Green, just outside Egham. Dating back to the 1890s and originally home to a gymnasium for the Indian Engineering College, which occupied the site between 1890 and 1905, the building has, over the years, adopted and lost various extensions and before the recent refurbishment, had laid dormant for fifteen years.

The repurposed 453sqm building – Hox Haus – will serve as the central focus, clubhouse and social amenity for Hox Park student campus, newly-created by developers Moorfield Group for students attending Royal Holloway, University of London. Located within a larger, 67-acre mixed-use site, owned by Royalton Group, the Hox Park campus is one aspect of an overall masterplan for the site that also includes affordable and luxury housing, as well as an Audley Senior Living village.

The vision for Hox Haus was to encompass a number of important practical, social and unifying functions for its student users, serving as a welcome point and gatehouse; parcel pick-up area; workspace for single study or group study and a downtime amenity with TV and games lounges, offering video-gaming booths, pool and table football. The building will also serve as the campus hospitality hang-out and has been flexibly designed for easy reconfiguration as a special event space, with moveable furniture and built-in bar points able to house pop-up catering.

Architecturally, Hox Haus is a stylish, eye-catching and dynamic two-storey building that seeks to blend its original Victorian brickwork with two new glazed light box interventions, creating a light-filled and largely transparent overall space that brings the outside in, references the building’s semi-rural location and offers a warm, comfortable and relaxing home-from-home for students. The two new interventions constitute a double-height, 44sqm gatehouse to the building’s east elevation and a 35sqm, covered terrace section on the first-storey, offering views over the whole campus. The terrace extension sits behind the parapet of an existing ground-floor extension, making it subservient to the host building.

“The brief for Hox Haus evolved gradually from the outset,” David Holt, Founder and Director of 74 explained. “Whilst we were initially brought in to look at the interiors of the student accommodation – a speciality of the practice – we were then engaged to explore the potential of this unloved building and, by determining the need for an appropriate amenities provision for the student body, were able to rescue it from decay and provide a much needed focal point for this large-scale, semi-rural student accommodation development.”

The heritage of the building was a key driver for the interior approach and, unlike many architectural projects, the interior was in fact the key driver overall, so that the architecture is subservient to both the existing host building and the functions within. The overriding concept was to create a space that felt like a country retreat or clubhouse-with-a-twist. The new gatehouse provides a sense of arrival, whilst offering a separation between the functions of ‘reception’ and the need for a comfortable student social space monitored, but not overlooked, by staff. While certain areas have key functions, such as the two group study areas or the TV and gaming lounges, others are multi-functional, for students to make use of as they wish.

The central zones are more obviously social, whilst quieter areas can be found along the edges of the two-storey space and within the first floor extension directly above the welcome area. Another major design driver was the building’s rural aspect and the design therefore strives to make the most of views over the historic surrounding countryside, as well as bringing the outside in via natural references and creating a rich, textured and high-quality feel with a materials palette that includes marble-effect Hanex solid surfacing and brass detailing. Upholstery fabrics include textiles that nod to British rural tradition, such as checks and tweeds, whilst colours span a whole nature-inspired autumn-to-winter palette and feature greys, browns, rusts and moss greens, with bursts of berry brights and large-scale, nature-inspired print wallpaper on opposing feature walls at the ends of the ground floor.

Lighting throughout, is supplied by Enigma Lighting and is used to create pockets of atmosphere. While decorative lighting is the main focus, subtle architectural up and downlighters are set within the ceiling and show off the structure of the brickwork.

Rachel Whitey, Associate Director at 74 outlines the role decorative lighting played in the scheme: “Decorative lighting was absolutely essential to its success, both in terms of how it is viewed externally and how it felt internally. Part of the client’s brief was the clear desire for a hospitality-style environment and for it to not feel like a typical commercial office or education facility.

“Key lighting considerations were to ensure the desired lighting levels were achieved for studying within the space, without creating a blanket light over the entire area. The balance was about creating pockets of useable, focused light for study, while also creating a hospitality feel that is both intimate and homely. We managed to coordinate with the M&E consultant to ensure they got the base levels correct and understood the brief. The lighting positions were fully co-ordinared with them to ensure when fitted, they worked in sync with the interior layout and facilities.”

Students enter Hox Haus through the fully-glazed, gatehouse and are greeted by staff at the bespoke reception desk, which features three Globe Pearl Drop ceiling lights by Rockett St George hanging above it. Here, the designers chose to keep the lighting minimal so as to not obstruct the clear views and beautiful brick arch elevation that formed the old entrance to the building. Pendants were introduced where it felt necessary to highlight and complement key areas. With that in mind, two pendants also feature in the seating area, chosen specifically because of their black open wire design, which creates a subtle design feature without taking away from the light and airy feel of the space.

Immediately to the left of the entrance arch stands a new machined-metal staircase, which has a dark perforated-metal balustrade and brass handrail. This dark palette is reinforced across the whole interior architectural treatment. Light fittings in the main spaces are arranged on metal-mesh grids suspended around the edge of the ceiling and feature slender brass rods reaching from one end to the other, which house globe pendants on bent arms round its edges and a minimal, geometric chandelier, at its centre. Bar-top lamps and floor lamps complete the varied treatment and help create zonal differentiation. Opposite the staircase is a U-shaped, curved, open-plan bar, which features pendant lights from Belgian lighting brand DARK hanging above it, chosen for their elegant simplicity, shape and marble material, which suits the café counter top.

“Each light fitting was carefully decided on by taking into account the particular location the fitting sits within, its interaction with its surroundings, and how it might complement the other interior design elements within its vicinity,” continues Whitey. “Alongside this, it was important to envision the fittings as a collection that come together to work as a considered whole. An example of this is the ground floor group study rooms, which are visible from reception onwards and divided only by a glazed wall with a crittal-style, glazed square framework. Each study room includes spun-leaf-adorned Orland pendant shades from Di Classe.

The exact location and proportion of the lights within these rooms became crucial as the square grid of the glazing framed certain elements.” Moving up to the first floor, the roof trusses have been left exposed, housing six eye-catching chandeliers at equal spacing. On the brick walls, the DARK light fittings from the ground floor bar are re-introduced as wall fittings to emphasise the joined-up design feel. “By utilising them in a different way, they also highlight a different zone,” says Whitey.

“Mirrors were deliberately placed on opposite walls to reflect the feature lighting and create an extra aspect of depth and lighting within the volume of space. Because this space was designed as an active games and event area, the light fittings chosen were fixed to either the wall or ceiling points to make it simpler to move things around.

“The lighting in this area was designed as a ‘village hall’ and to be non-specific to the floor layout. It doesn’t overly highlight specific zones like other areas, such as the ground floor, thus giving the operators the ultimate flexibility while maintaining the same ambient feature lighting.”

Aside from the main area, the first floor houses a series of specific-use areas, such as a TV lounge and games room, featuring button-back sofas, antiqued mirroring on the walls and a series of inset panels directly above and punctured by flower-shaped wall lights, bespoke-designed by 74 and made to order by Mullan Lighting. The first floor gatehouse extension features a central work island, with three pendant lights by Decode hanging directly above to create an intimate and focused meeting setting, supplemented by background and surface tubular spots as a backdrop. Alongside this, brass task lights were used for the booth tables and chosen to provide focus lighting for study, while also creating a modern ‘nod’ to the classic banker’s table lamp.

As with any project, Hox Haus came with its challenges, mainly relating to constraints of the existing building as Whitey explains: “The introduction of lighting fixtures to exposed brickwork walls and exposed structural trusses with no existing power infrastructure was definitely an issue. Without being detrimental to these existing elements, we had to consider carefully how we positioned the feature lighting elements. “For example, on the first floor, the beautiful timber trusses have been left exposed and the six chandeliers highlight the volume of the ceiling, creating drama. By working with the M&E team, we proposed to fix a minimal square trunking to the underside of the beams, into which all the wiring could be housed. We then painted this the same colour as the open roof and beams so that it blended into the existing structure. This meant that the power infrastructure was available to the drop pendants where desired but with no exposed wiring runs, so the trusses could be kept as clear as possible.

Any wall lighting additions to the brick walls were added via black conduit, which provides contrast but also suited the overall look and feel of the scheme.” For Whitey, looking back at the original concept visuals and then seeing the finished project, her initial impression is that the 74 team delivered exactly what they had promised and realised the concept and aspirations of the client in doing so.

“It was such a unique building with a rich history,” she says. “Using this as the basis to build our design from was quite different to other projects we’ve worked on. After various additions over the years, we wanted to strip the building back to where it started in its original form, then build it up again sensitively into a modern, functioning space. We had to really consider any interventions and look at how we could retain the beauty of the existing structure while also enhancing it.”

Sadie Malim, Head of Special Projects and Legal at Moorfield Group, commented on the project: “74 excelled themselves on the design work for Hox Haus. The combination of their devoted attention to detail and design flair resulted in a scheme that sets the new standard for student accommodation in the UK. They understood easily what we were trying to achieve and were able to deliver a knock-out scheme, which encompasses necessary practical considerations, but also delivers the wow factor.”