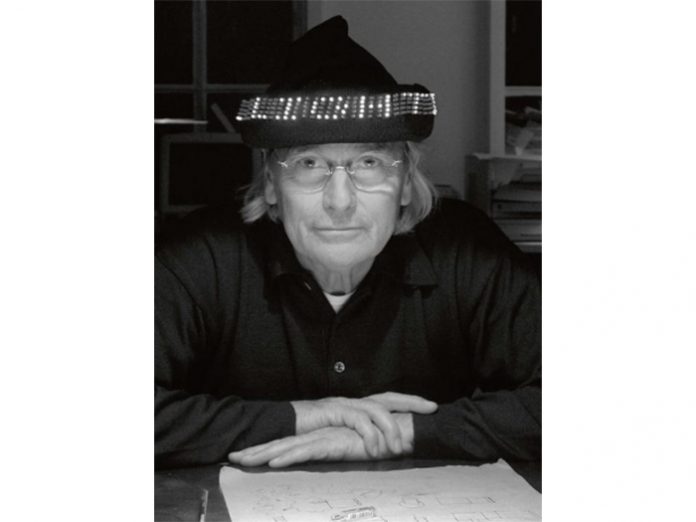 (Germany) – On October 21, 2019, lighting icon Ingo Maurer passed away in Munich, Germany, surrounded by his family.

His designs can be found in the collections of the world’s most important museums, including the Museum of Modern Art in New York, and at the time of printing, an exhibition was being prepared at the Pinakothek der Moderne in Munich, which will provide new insights into his work.

Maurer has received numerous prestigious awards, including the Design Prize of the Federal Republic of Germany and the Compasso d’Oro for his life’s work.

Always a pioneer in the development and use of the latest lighting innovations: as a great admirer of the light bulb, which he described as the “ideal symbiosis of poetry and technology”, he used low-voltage halogen systems in the 1980s. He went on to produce the first LED desk lamp in 2001, switching to OLED technology in 2006. Up to the present day, the potential offered by LED technology has always been demanded by Maurer, used in a versatile and creative way to achieve the best possible lighting effect.

His open mind led him abroad at an early age. Born on the island of Reichenau on Lake Constance, he went to the US in 1960 after completing an apprenticeship as a typesetter and studying commercial graphics. Until 1963 he worked there as a freelance graphic artist. Following his return to Munich, he travelled extensively in Japan, Brazil and other countries, as well as numerous trips to the US, where he eventually settled for a time – living in New York for over 40 years.

Since the 60s, Maurer had a very special relationship with the pulsating metropolis: “At home? Home is a place where I feel comfortable and inspired. That can be in New York, Paris, Tokyo, Sao Paulo or Munich,” he gladly emphasised. “I am at home when I am with good friends. I need provocation. That gives me the strength to be creative.”

Together with his long-standing colleagues, he developed iconic lamps at the interface between utility and art objects in the ‘Designerei’ in Munich-Schwabing. The special mixture of poetry and technology, pointed with an ironic twinkle in the eye, is a characteristic that epitomises Maurer’s design.

Development processes are playful, unconventional, always in search of an extraordinary solution. The smallest details are thought through and discussed on the model. The result is to find a special solution that captivates with its lightness and touches the human being like a spontaneous sketch. It is not uncommon for users to be involved right from the design stage and, as in ‘Zettel’z’ (1997), invited to help design the luminaire.

“First, the idea of an object arises in my head -like a dream. Only in the next step I search together with my team for ways to realise this. Sometimes it takes decades until the technical developments make our imagination possible,” he described the creative process.

In order to realise this vision uncompromisingly, Maurer decided as early as 1966 to manufacture his own products so that small series could also be produced. Even today, all luminaires are manufactured in Munich, Germany.

Maurer set international standards with design commissions in both the private and public sectors. The lighting of the underground stations ‘Westfriedhof (1998) and Münchner Freiheit (2009) in Munich, as well as the pendulum ‘Flying to Peace’ for Messe Frankfurt (2018), are just a few highlights of a long list of commissioned works. In 2018 he completed one of his most multifaceted projects – an overall concept for the Tsinandali Winery in Georgia, USA. More recently, the Residenztheater in Munich has been shining in a new light, with the iconic work of ‘Silver Cloud’.

The team at [d]arc media, passes its condolences to the family and employees of Ingo Maurer, who bid farewell to a special person that has inspired, challenged and surprised everyone time and again.

Ingo Maurer wrote over 50 years of light history and will always remain a lighting icon.