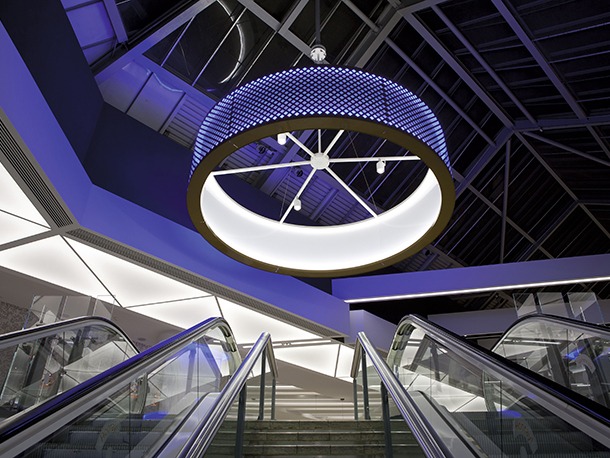 Intu has added another shopping experience to its catalogue of UK-wide centres with Intu Lakeside, a vast shopping complex situated within the largest concentration of retail and leisure in Europe.

The design brief was to increase brightness under deep set soffit areas by day, while allowing the lower level more intimate lighting by night. Lighting Design International took the architects’ start point and the challenges faced, to create a tailor-made final design.

LDI worked closely with acdc on the archtectural lighting to reduce visible light fittings by introducing bright clean linear LEDs concealed in various specialist details. A unique and randomised ceiling soffit feature was created through stacking varying custom-formed indirectly illuminated GRG linear ceiling profiles. During the day this soffit lighting provides indirect lighting and increases apparent brightness to balance against natural light. During the evening the feature dims, allowing glare baffled twin recessed downlighters to provide focused table lighting, saving energy, and reducing the scale of the space for improved ambiance. The seating groups are lit by LED sourced feature pendants from Flos, hung in rows to provide visual interest when viewed from a distance and decorative lighting for charm during evening lighting scenes. Next to these, the fast food retail counters are framed on three sides by evenly back lit panels containing encapsulated organic materials such as twigs and seaweed.

The central atrium area is lit by slimmer, lower level beams with recessed diffused linear lighting. These divide the long space, while providing ambient lighting and decorative feature lines of light, both day and night. Additionally, larger, higher level beams with black-finished integrated slots conceal high output narrow beam adjustable track spotlights, providing pools of light to seating groups during the evening. These are controlled by an astronomical time clock and photocell, to be off during the day, unless light levels from daylight drop too low. All focused downlighting to areas directly adjacent to daylight are commissioned with this logic, to save energy when adequate lighting levels can be provided naturally.

The atrium perimeter ceiling soffit is encompassed by tessellated back-lit triangular stretch ceiling panels. This feature provides a bright even soffit in balance against the day lit skylight, reducing the need for downlighters, dimming by night to provide a dynamic, consistent, highly visible feature ribbon of light to bind the scheme together. The feature ceiling can be experienced from all third floor food court areas, and is also visible from the second floor mall area to attract custom and provide visual interest. Stretch ceiling panels were designed to have triangular form, back lit from the sides only. This helps to increase dynamism, creating a unique feature that reduces lighting flatness. The ceiling panels’ triangular shape helps to visually divide long sections, decrease lighting quantities required and improve maintenance. This detail is a major focal point, and acdc worked closely with LDI to provide the technology that would create the desired lit effect. Mock-ups were created to establish the best possible way of lighting the panels, and it was essential that all the LEDs gave a consistent output and colour temperature across the large installation. Above the escalators, at either end of the food court, four-metre wide by one-metre tall, 400kg pendants add a decorative touch, as light beacons welcome guests to the new food court.

The brief was to create a decorative lighting beacon that could be seen from the second floor mall to announce the redevelopment of the third floor food court. The scale of the third floor atrium automatically determined that the pendants had to be large enough to have the impact desired. Given that the architects had originally envisaged a large shallow empire style shade, it was clear that developing a shade of four-metre diameter was going to be a challenge on many levels. Structurally, fabric would be too unpredictable and would prove to be too low weight, allowing the shade to move or sway like a large sail. A shade this large needed lots of light output, to give it prominence and to achieve consistent illumination. The final colour of the shade was much subject of debate, as the architect had originally proposed red, but such a bold colour in a permanent fixture could prove to be unsuitable in the future, or too overpowering in relation to the rest of the architectural scheme. Maintenance would be a further challenge, with the shade hanging at the top of an escalator in a difficult to access location.

LDI took a visual cue from the already specified Flos Tatou fittings in the fast food area, and began to explore how perforated materials for the external drum could add texture and reduce the visual weight of the fitting. The LDI team wanted the shade to feel internally illuminated, like the original fabric shade concept, but using a much more robust material, and perforated steel sheet was the ideal solution. Using the perforated sheet for the external lighting allowed the build up of layers of light, with the internal lighting being provided by a separate linear LED light source, and also allowing the shopping centre to use the shades internal face for possible future graphics application.

As the shade concept developed, LDI identified that it had three clear functions, requiring three types of lighting, each with its own individual control. The shade had to provide feature lighting to its exterior that could be seen from a distance, and it was determined that this lighting would be RGBW, allowing the shade to change its colour and personality from day to night, seasonally or over the life time of the shopping centres requirements. The shade had to provide a warm white inviting ambient lighting effect to the top of the escalator and when viewed from below, to soften the view of the glass roof and sky during the late evening and night, this effect was provided by 3,000K linear halo lighting to the internal surfaces of the shade. Finally the shade had to offer high output directional lighting to the top of the stairs to provide adequate light levels for safety. This was achieved via 2,220lm lockable adjustable spotlights.

Soon after the shade’s functions, general aesthetics and scale had been defined by LDI, Mike Stoane Lighting was approached to assist with the shade’s technical design. Mike Stoane Lighting was sure that the shade had to be fully constructed from steel for structural strength and it was agreed that a full scale 1/6 shade mock-up would be produced to test lighting effects and to confirm aesthetics and structural design. With Mike Stoane Lighting’s assistance the shade was developed to have a clutch mechanism at the mounting location, allowing the shade to be rotated to maintain any section from a safe location back away from the top of the staircase. LDI used variations of Mike Stoane Lighting standard luminaires to provide the lighting effect to the large custom built shade, with 2220lm Podgy fittings providing the directional downlight, 1960lm/m G2 high output strip providing the warm white ambient lighting and a similar Mike Stone Lighting RGB LED profile providing the colour variable external lighting.

Through considerable design and architectural challenges, the Intu Lakeside food hall has arisen as a well-thought-out space with intelligent lighting decisions.