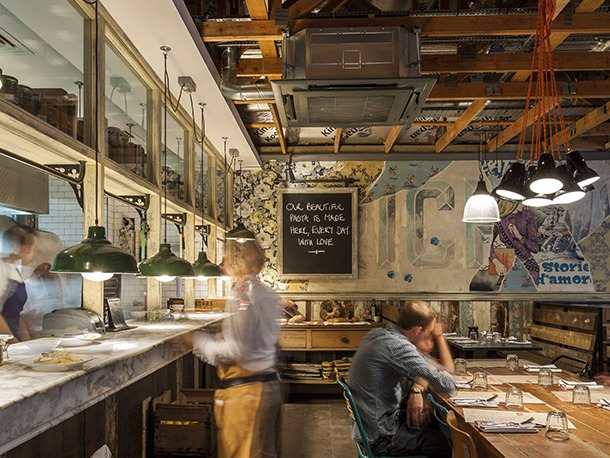 Since first appearing on UK television screens in the late ‘90s, chef Jamie Oliver has risen from fresh-faced newcomer to gastronomic impressario, presiding over an ever expanding restaurant empire. Now the Jamie’s Restaurant brand has been joined by a new off-shoot, Jamie’s Trattoria.

Jamie’s Italian wanted to create a smaller, more intimate dining experience for a new venture in Richmond, South West London. Their aim was to produce a memorable environment that would reflect a local, independent feel, while still retaining the style to which regular diners at Jamie’s have become accustomed.

Design agency Blacksheep was commissioned to create a look for the trattoria, the tenth restaurant Blacksheep has designed for Oliver over a four-year period. The team were tasked with a ‘no design’ approach in order to create a relaxed and laid back setting that would appeal to the local community.

The layout of the restaurant combines a range of different seating options – booths, an informal lounge area and a bustling shop front – all catering to a variety of clientele, from those wanting the typical Italian feast with all the trimmings, to those just nipping in for a coffee or a gelato.

Emma Freed headed the design team at Blacksheep. “One of the biggest challenges on the project was that it had a tight schedule, which meant that some aspects of the build and the design were actually being implemented simultaneously,” she explains. “Although we didn’t fully appreciate it at the time, this process in itself actually served to add to that slightly ‘scattered’ charm we were trying to create.”

In searching for the furniture that would be used in the trattoria, Blacksheep were inspired by Jamie Oliver’s passion for all things authentic and natural, which underpinned much of the development of the design.
“We sourced the W.C. cubicle doors from a salvage yard in Dorset, tiles from a local church were re-used and the booths were constructed from reclaimed scaffolding planks,” says Freed. “We added layer upon layer of different reclaimed materials from local antique suppliers, adding novelty items such as Oliver’s own pictures and vintage pieces from his warehouse, until the desired effect was created. Nothing matched, it felt much like one’s home would feel, the result of a long journey.”

The lighting fixtures play an essential role in ensuring the restaurant feels like a fully integrated part of the community.

During Blacksheep’s past work with Jamie’s the practice has developed a tradition of selecting eclectic light pieces and the Richmond trattoria was no exception.

“We have used a real mix of lighting,” says Freed, “from feature murano glass chandeliers and delicate opaque glass shades through to reclaimed factory bulkheads and EDL lamps. We also reinvented some items, such as the reclaimed anglepoise shades on brightly coloured flexes which are clustered over tables throughout the restaurant.”

With the exception of the task lamps over the waiters stations all the fittings are 230V and all are mains dimmable, as, notes Freed, “dimming is integral to any Jamie’s Italian environment.”

Where the shades cover the light sources, low energy LED bulbs have been used, but in instances where the source is visible, as with some of the small opaque glass and enamel shades, Ferrowatt squirrel Cage Filament bulbs have been specified. Indeed, these have become a Jamie’s Italian standard over the years. The exterior lighting and high level spots were supplied by Davey Lighting, while all other fixtures were reclaimed and sourced via a number of suppliers including The French House, Retrouvius, In The Woodshed, Trainspotters, The Architectural Forum and Fritz Fryer.

“It was integral to the design concept that everything had a story to tell, so the emphasis was on reclaimed fittings,” comments Freed. “Lots of the fittings were reclaimed enamel shades, however, there was also a feature murano glass chandelier and opaque glass pendants. This wasn’t possible with the exterior lighting so we specified standard Davey Lighting fittings in a traditional style.”

As Blacksheep CEO Tim Mutton observes the new Jamie’s venture, perfectly captures a shift in tastes towards a more immediate, homely aesthetic. “The inception of Trattoria itself came as no surprise to me,” he says. “More and more of today’s modern brands are quickly realising that less is more and that in a consumer driven marketplace, demand is high for venues that support an independent and local vibe. People like to feel that a restaurant is ‘their’ restaurant, a home away from home and I think Jamie’s Trattoria captures the beauty of this movement in restaurant dining perfectly.”