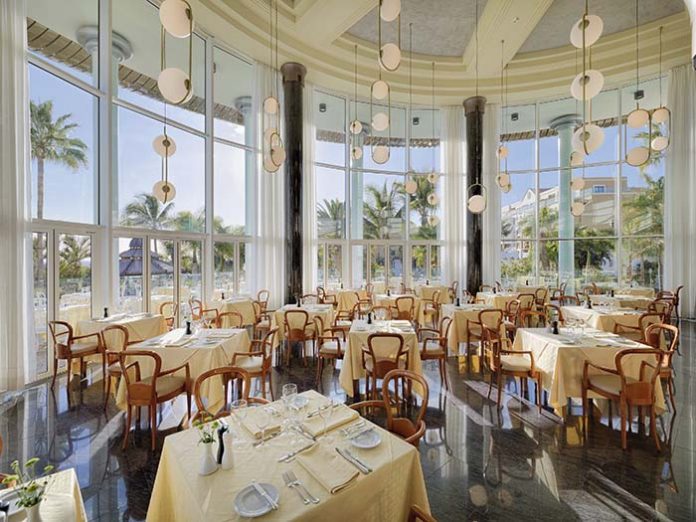 Stone Designs Studio worked with ImpulsARQ on the refurbishment of Jardines de Nivaria to bring a fresh, modern approach, while staying true to the DNA of the Adrian Hoteles brand.

Jardines de Nivaria is a five-star hotel located in Costa Adeje, Tenerife. Featuring modern design and facilities, Adrian Hoteles aims to provide their guests with everything they need for an unforgettable experience. As part of a major refurbishment, Stone Designs Studio was tasked with remodelling the Jardines de Nivaria, alongside ImpulsARQ studio. The focus was to upgrade the suites, two restaurants, spa and common areas while adhering to the style that represents the DNA of the Adrian Hoteles brand.

A project outside of Stone Design’s usual design work, the refurbishment began with the remodelling of the suites, which involved creating a series of elements that serve to unify the rest of the hotel. “Lighting played a main role in unifying the different elements of the project,” Stone Designs’ Isabel Galindo tells darc. “We had a very close relationship with the client and communication was fluid at all times, which helped to keep the true essence of the project from start to finish.”

The decorative lighting in the suites included a C_Ball suspension lamp designed by Stone Designs in collaboration with Spanish manufacturer B.lux. It consisted of a 15cm glass sphere and is framed in a metal structure to light the nightstands.

“It was very important to us that the lighting fitted the space and the style of the hotel,” continues Galindo. “The purpose was to create something that represented the feeling we were looking for. We chose pieces that weren’t going to be the centre of attention but played an important role in the overall design. When we began work on the project, we found many vertical and horizontal spaces, different ceiling heights, and we had to cover skylights… we wanted ambient lighting that didn’t limit us for the layout of the tables.

“Lighting was really important in this project – we used it to compose all of the different spaces, all of which speak the same language thanks to the design.”

For the common areas, Stone Designs, opted for multiple suspension lamps comprising vertical and horizontal structures with a larger 30cm diameter glass light sphere. The idea was for these multiple lamps to make use of the existing points of light, while at the same time adapting to the layout of the space to illuminate it throughout.

“La Cupula restaurant is the most important element within the complex. It was the most challenging too,” says Galindo. “Located on the Canary Islands where they have one of the most important astronomical observatories in Europe, it was impossible not to be inspired by the stars and the firmament that shelter the Teide. This is why the ceiling represents the explosion of a supernova, which at night is retro illuminated, generating a spectacular effect in the space. Tom Dixon’s lamps fall over the tables as if they were lava balls, adding a big dose of drama.

“The constellations were also the inspiration behind the C_Ball collection created specially for this project. Located in the suites and the Solandra buffet area, we knew we needed something special to fit the big and beautiful space. We realised that when you look at the sky at night and you see the stars, you see spherical lightening dots – this became our inspiration.”

“We were really happy with the end result,” says Galindo. “We weren’t sure what it was going to be like, given that this was such a different project for us. We really enjoyed the challenge and every step of the design.

“We had to work around different architectural challenges that the client wanted to keep – some of which we weren’t convinced of in the beginning. But in the end, these elements helped to keep the spirit of the hotel and made us work around them for the final result.”

❗Happy #internationalwomensday❗ As a celebrat