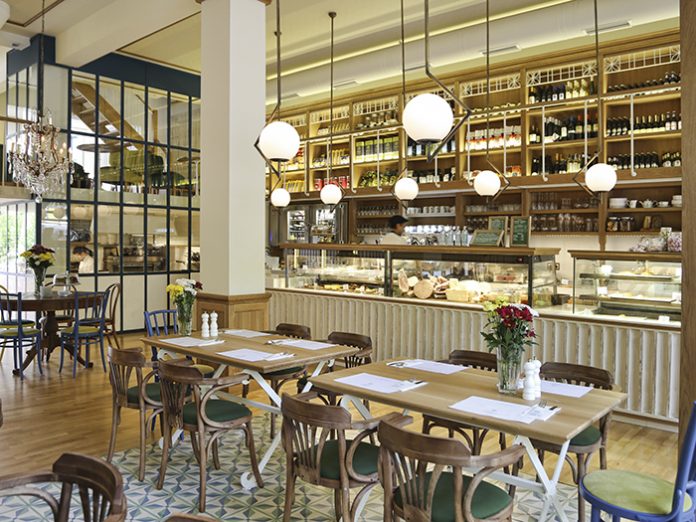 After years of managing eateries from other owners, first time restaurateur Ntoumis Konstantinos struck out on his own to create a Greek-style bistro La Maison du Grec in Athens, Greece. Working with architect Minas Kosmidis for the interior and lighting design, having previously designed two other restaurants in Cyprus together, they approached the Greek bistro with collaborative confidence.

Kosmidis’ studio undertakes architectural and interior design projects across both private and commercial sectors, focusing mainly on food service and entertainment. Konstantinos asked Kosmidis to design a restaurant like a Greek version of a bistro, where the products used would be exclusively Greek from small local producers, with a design style similar to that of 1920’s-1950’s Athenian urban houses. This was based on the design philosophy of remodelling objects of forms of the past to help them regain their glory, so “none of the traditional elements were used without a rethinking and adaptation of contemporary living,” said Kosmidis.

Located in the affluent suburb of Kifissia, the café slots neatly into the locale’s leafy streets. “The design complements its surrounding to a tee: the airy main dining room is adorned with updated homages to classical Greek architecture,” explained Kosmidis. “A mezzanine and inner courtyard at the back modelled on old Athenian houses provides shelter from the thrum of the street outside, offering a menu overseen by acclaimed Greek chef Dimitris Skarmoutsos.”

Kosmidis commented on the importance of the bistro’s lighting design to the project as a whole: “The starting point of a project is the way in which an architect manages natural light. Consequently, designing the artificial lighting of a space is an equally interesting and integral part of the process.”

One of the first points of the project to consider was the lack of natural light in the kitchen space. This was dealt with by creating a transparent wall towards the entrance, which allows natural light to enter into an opened kitchen.

Now working with an abundance of daylight, Kosmidis could consider how decorative lighting would work in conjunction. His studio custom designed all of the decorative lighting fixtures used at La Maison du Grec, except for the chandelier, to accentuate the characteristics of the bistro that make it truly Greek.

“All decorative lighting pieces designed by the studio were inspired by lighting and decorative elements of the first half of the 19th Century found in urban Athenian houses of that period,” said Kosmidis, while the old chandelier was found and bought at a flea market in Monastiraki, Athens. Be it a custom designed piece for the project or one with a history already in tow, the lighting fixtures at La Maison du Grec were carefully selected to capture the essence of Greek authenticity.

The custom made wall mounted fixtures serve to accentuate the channels of the wooden wall coating, which were influenced by the fluted ancient Greek columns found in neoclassical Athenian houses. The custom made pendants on the other hand were a combination of the forms and shapes of the custom designed tiles and the classic bistro pendant globe lamps.

La Maison du Grec’s lighting design does not just serve to cover the lighting needs of each space but creates a cosy and warm atmosphere, accentuating or darkening specific materials and textures, while most importantly reinforcing the identity that both client and designer wanted to implement.

“The final outcome of the project was actually identical to the original vision for the space,” said Kosmidis. “Thanks to an open-minded client and his ability to understand complex design concepts, and his willingness to create an original restaurant, the studio was able to design and carry out the original vision to the finest detail.”

As the bistro serves to bring to life the glory and artistry of Greek neoclassicism, the lighting design itself serves to do no less. It is an intelligent selection of contemporary and classic designs that recreate an era so integral to the country’s culture, making it accessible to the modern needs of today’s Athenian bistro-goers.