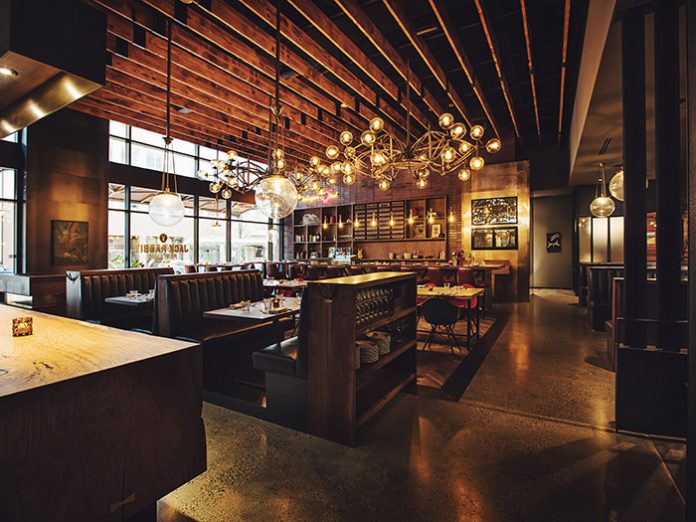 US-based PUNCH Architecture and Illuminate Lighting Design transform a dated and dilapidated space in Portland, Oregon into a hip new restaurant experience that perfectly reflects the city’s roots and ethos.

The Duniway Portland Hilton hotel in the US is redefining the hotel dining experience through its Jackrabbit restaurant. A return to the heyday of luxurious hotel bars and a snapshot of the best of upscale Portland dining, the hotel caters to locals and travellers alike, with unexpected and memorable menus and experiences.

The design concept for Jackrabbit combines the creative approach of Chef Chris Consentino’s behind the scenes kitchen craftsmanship with the grit, flavour and character that makes Portland one of the country’s premier dining and lifestyle destinations. As with kitchen environments, the ingredients of Jackrabbit’s interiors have been meticulously selected and come together to create vignettes that highlight key areas of use.

Cosentino’s philosophy is to use everything the animal gives us and this has been reiterated in the restaurant design by utilising the entire space, this was further developed by keeping to his holistic approach of simplicity, sustainability, authenticity and craft, with the design embracing Portland and Cosentino’s approach to cooking and lifestyle – working in tandem with the kitchen and bar. The result is a synergy between flavour and atmosphere, place and taste, embodying Portland’s spirit of conviviality.

Punch Architecture was brought on board to work on the restaurant’s interiors, based on the design studio’s existing relationship with Delicious MFG. Having engaged the hotel owners to go over the key directional points regarding the overall feel of the public space, it was established that the bar and restaurant should not feel as though they were located in a hotel space, this in turn influenced the entire public space environment for the hotel. Illuminate lighting design came on board to support Punch’s vision and design, by enhancing the space through discreet architectural lighting design that is functional, but doesn’t have a seemingly noticeable presence. The architectural lighting was there to make the decorative lighting features, which are very prominent in the project, work in such a way that they provided the right amount of sparkle without creating too much glare.

“Thankfully the concept and design brief didn’t change over time and there weren’t any real value engineered revisions that we had to do for this project,” Zak Ostrowski, a Partner at Punch, tells darc. “The decorative lighting elements were key to the design from a conceptual and aesthetic perspective – while also tying in Chef Consentino’s passions and roots. Key considerations were to make sure all of the custom decorative lights were locally made, which they were. We designed the fixtures in line with our design sensibilities – a little rough around the edges, a splash of bling and a general amount of being ‘rad’.”

The bike chandeliers in the dining space came from a discussion about Chef Consentino’s passion for cycling, lighting and Portland. The designers used recycled Schwinn bike frames, blown glass and low rider inspired Dayton rims with old school Castle spikes for the design. “This tied in nicely with our interest in tricked out objects of movement,” says Ostrowski.  “We added some nice touches of brass for that bling factor and blackened steel to add consistency to the restaurant’s overall design.”

The custom designed minimal blackened brass chandelier is a simple rectilinear form that is understated but monolithic. It creates a presence of masculinity and femininity while gently floating above the reclaimed live-edge white oak drink rail at the bar area.

The centrepiece of the main dining room is the large wood and steel box beam.

“We wanted to create this massive object that again floated above the space filled with rich earth tones,” Ostrowski explains. “It reads as a massive felled timber beam with industrial steel brackets, tying into Portland’s logging history and use of wood structural beams and columns for multiple projects. It also ties in nicely with the exposed wood beams at Chef Consentino’s restaurant Cockscomb in San Francisco.”

Each decorative lighting feature was carefully considered for a space that serves different functions in the same location. For example the design for the articulating chandeliers was based on the need to rotate the fixtures to tie in with the private dining rooms, which expand in size. The custom live edge walnut tables can be put together to become one giant bookmatched slab and the designers wanted the lights to do the exact same thing. “We collaborated with Savoy Studio on making this happen,” says Ostrowski. “The independent chandeliers have the ability to become this slick and organic giant 20ins chandelier made out of blackened brass, steel and handblown glass.”

The decorative glass elements are leaf shaped to represent Portland’s lush vegetation and complement the original artwork and leather belt feature wall in the space.

The primary lighting design from Illuminate complements the interior design and enhances the dining experience by layering several lighting components to create a scheme. Architectural light fixtures are hidden among the wooden beams in the ceiling to provide functional lighting for table surfaces, but are discreetly and strategically placed so as to give the decorative fixtures a significant presence. A combination of recessed and stems mount downlights while the precisely calculated beam spreads light over the tables and food on display, while warmer decorative ceiling and wall fixtures provide the glow that complements the interior style. Key features such as brick walls, leather clad walls and burnt wood screens are grazed with tighter beam downlights and linear grazers. A further detailed layer of lighting is added using linear LED fixtures, integrated within display shelving, uplighting shelves above eye level and downlighting shelves below eye level, eliminating any possibility of looking into a bright source of light.

“The lighting scenes in the space are designed to create various moods throughout the day from breakfast to late night and after hour’s settings,” Niha Sivaprased, Senior Designer at Illuminate Lighting Design tells darc. “An added layer of complexity lay in the need to respond to the incoming daylight and the brighter light levels in the hotel lobby. Smaller groups of fixtures are controlled together to achieve higher control granularity allowing for more meticulous lighting scene settings.

“The perfect balance between sparkle and soft light, functional and decorative light, and ambient and accent light fashions an enticing spectacle from the outside and a comfortable ambiance on the inside. At Jackrabbit, light plays a vital role in bridging the gap between the physical space and the human experience within it.

“The space is rich, relaxing and masculine at surface level, but as one peels back the multiple layers of the project; a subtle femininity comes out with the warm materials, artwork and intimate decorative lighting.”

“The project team was able to turn a dated and dilapidated space into a completely new environment that fits into Portland perfectly, while also reflecting Chef Chris Consentino and the hotel’s new direction,” Ostrowski concludes. “It’s one of the coolest Hilton Brand Hotel projects out there and we are proud to have been a part of it.”