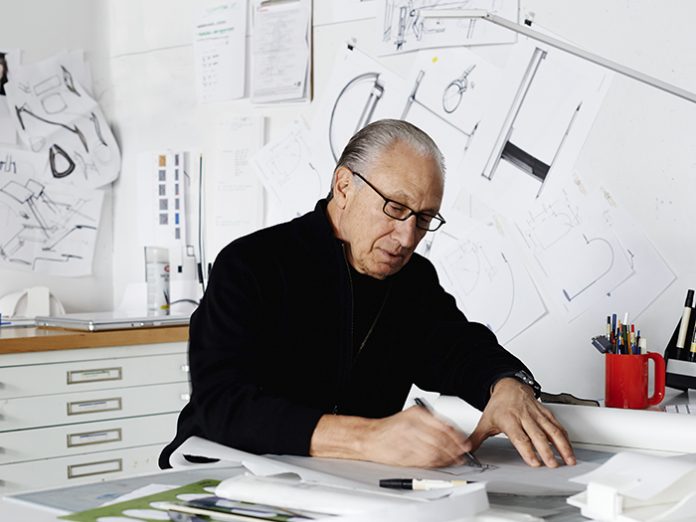 Robert Sonneman is considered by many as a legend in lighting. On the 50th anniversary of one of his first designs, Orbiter, darc spoke with him exclusively about his passions, inspiration and a new way of working with light.

Robert Sonneman, ‘Lighting’s Modern Master’, pioneered contemporary lighting making it an art form and his award-winning designs have been at the forefront of the design world for almost five decades. Since their introduction in the 1960s and ‘70s, many of Sonneman’s lighting designs have become classics of the modern era.

Born and raised in New York City, Sonneman displayed a keen interest in art at an early age. He studied art at the Rhodes School, took life classes at the Art Students League, and as a student became a member of the Museum of Modern Art and the Whitney Museum. Three days out of the Navy, at the age of nineteen, Robert answered an ad to work as the sole employee in a lighting store, called George Kovacs, which is where he was introduced to the European minimal modern perspective, from the Bauhaus industrialism to the sensuality of the Danish modern forms. While finishing his senior year at LIU, Sonneman started a lighting factory for Kovacs, designing and building a line of lamps based on the sensibilities he had developed, before leaving to found his own factory a few years later.

With an ever-present curiosity and hunger to discover new insights, Sonneman acquired the skills to draw and engineer the products he created. His first products were functional and mechanically-based designs, like the Orbiter Lamp that is still in production today. “I was always designing things,” he tells darc. “Even as a kid. My parents were in the lighting business so I always had that background, but I didn’t make the connection at that time. I was always fascinated by the making of things… I wouldn’t buy a bicycle, I’d make the bicycle!

All of that curiosity and mechanical aptitude came into play when I was designing lighting, most of the stuff I did because I didn’t know that I couldn’t… of course you learn a few things though when you’ve been doing it for 50 years.” Sonneman’s designs became, and continue to be, recognised and acclaimed by the design community, museums, and major retailers. His works have been exhibited in museums including: the Museum of Modern Art, New York; Cooper-Hewitt Museum, New York; Contemporary Arts Museum Houston; the Chicago Museum of Science and Industry; the Krannert Art Museum at the University of Illinois; the Philadelphia Museum of Art; St. Louis Design Center; and the Saskatchewan Science Centre, Canada. “I’ve done a lot of things in terms of design,” he says.

“But I’ve always been a modernist and continue to be, even more so now. I’m at a point where I’m able to be much more connected to it than ever before because there were commercial limitations.” Sonneman sites this freedom as relating to two things firstly the big change has come through technology. Before LED designers were essentially wrapping a heat source and that became the lamp. “LED technology has changed how we could imagine the form factors and reimagine what we could accomplish with them,” he says. “We treat LED and technology very seriously in terms of what it’s able to do and what it allows us to produce. Our world has been completely changed because of how we’re integrating technology.”

Sonneman has lectured at design schools and professional organisations internationally. As an active contributor to design education as a guest lecturer and critic, he has served on the Advisory Boards of the Pratt School of Architecture, Parsons School of Design, and the Art Center College of Design. In addition, Sonneman has participated in the Stanford Forum on Design and served on the design advisory board of the Nissan Motor Corp.

As a working designer, Sonneman divided his time between Milan, Tokyo, and his New York home. Through the 1970s, he broadened his insight from the origins of the early European industrial aesthetic and the Zen of the Japanese architectural masters, through the de-constructivists, the American Post Modernists, and today’s architectural sculpturalism.

American Contemporary Style is broadly diverse, crossing over several genres from modern’s original machine aesthetic to a more comfortable, individually centric expressive style. In the following years, Sonneman studied and worked in architecture and industrial design until his practice became overwhelmed with product design projects. Lighting was always an important area in Sonneman’s design practice and subtleties of the architectural discipline are evident throughout his design experience.

Having spent several years developing product, as CEO of Ralph Lauren Home Product Development, Sonneman gained insight to a richly eclectic, broad range of style and grew to become a modernist with a historical sensibility. He understood that it was critical to develop insight with classical design, art, and traditional architecture as a basis for understanding the genesis of the modern movement. When asked what lighting design should bring to a space, Sonneman muses: “I think that depends on the space. When I imagine a space, I imagine it to be simple and pure as those are the kind of spaces I prefer. However, when you do hotels and the like, it’s not always the case. Sometimes the lighting has to be dramatic and a point of interest, sometimes it has to be integrated into the environment and architecture.”

For Sonneman, lighting is infinitely interesting and incredibly challenging on many levels. Lighting requires knowledge in design, manufacturing, materials, and process, with technical and mechanical expertise across a broad range of activities, including a deep commitment to technology.

“Lighting is more exciting than ever before and I’m having more fun than ever before too,” he says. “It’s a search to achieve the simplist solutions to achieve the most complex of situations. Finally, we’re in a place where we’re involved in technology driven systems, integration and broad applications in multiple spaces. The Suspended lamp for example took a sort of ‘decorative architectural’ approach that we added functionality to, but the scale was light…Now, I’m getting into things that are much bigger in scale and for use in much bigger spaces – we’re getting to integrate all sorts of technology into that.

“Going forward, integration will definitely be a consideration. When you’re dealing with LED you’re dealing with electronics, we’re generating lighting as a result of an electronic activity and so that puts us in a whole other place in terms of controls and so on. We’re doing really interesting things with tunable light for example, and what’s so much fun for me is that technology is letting me get back to the architectural basis of modernism – more structural, simpler. The things we’re doing now are getting cleaner, they’re not adorned with anything. For me, the aesthetics of something have to come from the shape of the object, not from something that’s been added to it.

“The things we’re doing now are things we couldn’t have done using conventional light sources, that’s what’s opened up the world and has really changed things. No matter what we designed before, we were essentially packaging a heat source. We didn’t know it then, but now we can do what we’re doing, we understand that all of the volumes, scales and shapes were a result of having to contain the ‘heat’ source, now we’re moving forward and of course there’s other challenges, but what’s really interesting is that we get to work with some smart people; we have bright, young engineers on board and I find myself working on these projects where we’re discussing the physics of it all. I think to myself, god how lucky am I that at this stage in my career, I’m engaging with a 27-year-old challenging the whole status quo of everything – I love that!”

Working every day with a team of dedicated young people, eager to learn and anxious to invent their futures, Sonneman continues to push the boundaries of design and innovation – the vision is limitless.