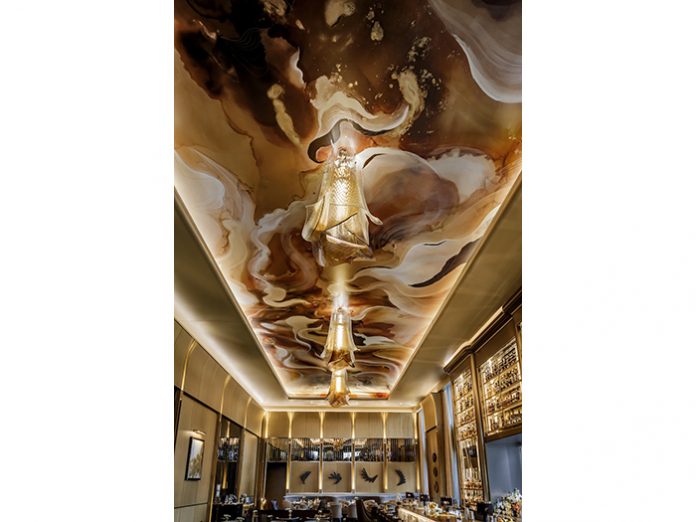 Toronto-based interior design firm DesignAgency has been awarded the International Hotel Design Award at the 2019 Restaurant & Bar Design Awards for its design of Louix Louis, the 31st floor grand bar and restaurant inside the St. Regis Toronto – featured in the Sept/Oct issue of darc.

The award was presented at the annual gala event at London’s King’s Cross on October 3, 2019, elected by a jury industry professionals working in design, architecture, hospitality, and lifestyle media.

Louix Louis stands at 31 floors above the Toronto skyline in the heart of downtown. Inspired by Toronto’s heritage as one of the largest distillery districts in the world during the turn of the 19th century, the interior and its 60-foot ceiling mural ‘Bouquet of Whisky’ by Toronto muralist Madison van Rijn, is designed to represent the inside of a whisky glass. At the heart of the restaurant is the two-storey-high grand bar showcasing over 500 dark spirits.

In response to the win, DesignAgency Principal Allen Chan said: “We are delighted to receive this international recognition for Louix Louis and are proud to be a part of the team that worked so diligently to equate the St. Regis Toronto with sophisticated and luxurious hospitality.”

Tim Terceira, General Manager of the St. Regis Toronto added: “We are thrilled that DesignAgency has received this prestigious recognition for their work, in partnership with the Marriott Luxury Design team, for Louix Louis. The striking design and modern elegance have set a new standard for luxury hotel restaurants within Canada and we are proud to receive this honour alongside DesignAgency.”