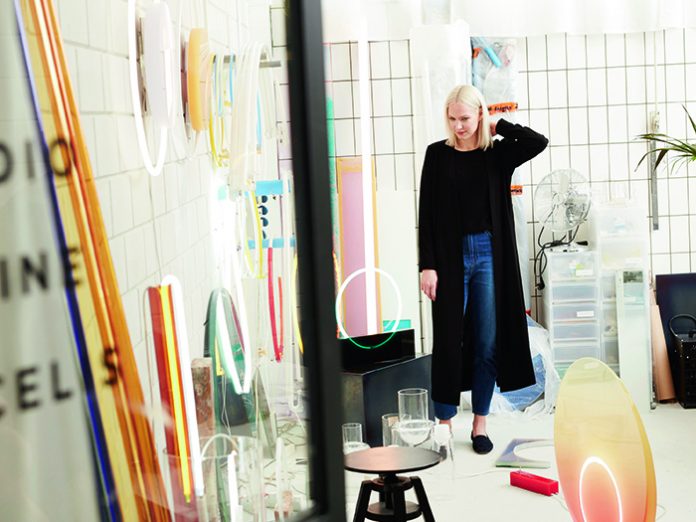 “I love neon” proclaims Dutch industrial designer Sabine Marcelis from her Rotterdam-based workshop and studio. An uncommon favourite amongst lighting designers, neon is not your typical go-to light source. Even so, Marcelis has managed to make neon sexy, if not totally chic.

We’re sitting together in a small office on the ground floor of SuGu, a creative workspace and warehouse situated on the port city’s western shores, while the rest of the team is out for lunch. Dressed in minimalist navy blue threads, Marcelis is all energy behind a clutter-free desk. A series of bookcases containing inspirational literature, artifacts, and many, many samples lines the walls, supplying a colourful backdrop to the industrial surroundings. A Voie table lamp resting precariously upon a pile of books casts a soft halo behind her.

“I definitely wasn’t someone who knew what I wanted to be from an early age,” she confesses. “I’m very intuitive, and have always enjoyed creating things. When I was young, I used to sew bags and try to sell them at the markets where my parents sold flowers. I never had a clear sense of what I wanted to be, I was just doing things that I liked at the time.”

Born and raised in Krimpen aan den IJssle, a suburb of Rotterdam, Marcelis is Dutch by nature but a Kiwi at heart. At age nine she and her family left their native Holland and emigrated to Wellington, New Zealand. It was there that, as a teen, she discovered her passion for sport, and first learned to channel her creativity into the physical world. “When I was sixteen I got really into snowboarding, and so that took over my life for a few years. I completed my last year of secondary school at an Outdoor Pursuits college, where you go rock climbing, skiing, and things like that. It was a really great experience, a very different kind of learning,” she says.

After stints working as a snowboard instructor in New Zealand and on Canada’s Whistler Mountain, Marcelis decided it was time to carve a new path for the future. “I realised I couldn’t earn a living snowboarding, so I was like, OK, I’ve got to learn something and get a degree. My sister studied industrial design and I really liked what she was doing, so I decided to give it a go. I couldn’t imagine doing anything else now,” she adds.

Marcelis enrolled in a local design program, and was instantly hooked. “I was quite lucky” she says, alluding to her impromptu decision to pursue design. Two years into her studies she decided to take things a step further and applied to courses abroad. In search of a “more poetic way of working,” Marcelis enrolled at Design Academy Eindhoven and made her return back to the Netherlands at 21.

“I definitely feel like I got a good education in New Zealand, but it is was a very traditional way of teaching industrial design. DAE offered a more realistic approach, one that’s closer to the real world. As a student, you’re left on your own to find materials and machinery. It taught me how to be resourceful and how to work creatively with others,” she says.

The Academy turned out to be just the right match for Marcelis, who thrived in the program’s hands-on and explorative approach. “I have a very driven personality. I want it my way and I’m not afraid to fight for it,” she says, reflecting back on her final graduation project, House Wine, a nifty DIY winemaking kit that turns fermenting wine into a work of art. The project, which would be extensively published and earn Marcelis her first gallery commission, was not exactly what her professor had in mind.

“He saw it as a sort of bread maker, something for your kitchen table, and I was like ‘NO, that’s not it at all! It’s like an aquarium in your living room!” she says, laughing. “We really couldn’t understand each other. It taught me that it’s OK not to agree with everyone, and that you need to fight for your views and bring the right arguments to the table.”

Marcelis’ uncompromising determination and vision has played out into her professional career. “I feel like I work quite selfishly because everything I do is out of a personal interest or fascination. If something doesn’t interest me, I won’t pursue it. I want to explore and challenge myself with the work I do. I think that’s always been a very important aspect of my work.”

Marcelis opened up shop in 2011, working first as a freelance designer before devoting herself full-time to her personal research and work. “I haven’t had to actively pursue work myself, I’ve just been doing my thing in the background, and in the last few years people have started noticing and taking an interest in me and my work. Now it’s more about saying no to things and being selective of who I choose to work with.”

For a young designer, still at the bud of her career, Marcelis is extremely disciplined. “I don’t want to repeat myself,” she says. “I don’t want to keep making the same things over and over again. Of course, there’s a red thread that runs across my work, but if there’s the possibility to do something custom or specific to the project, then that’s definitely my preference,” she adds.

While Marcelis’s body of work is varied, ranging from custom interiors to ticking clocks, the shining theme that unites them all is, as she explains, “this fascination with light, both natural and artificial, and how, when combined with other materials, light becomes a tool for seeing something other than you’d normally see. It’s all about creating a moment of wonder. Resins and glass are the perfect materials for that,” she adds.

Marcelis, who works almost exclusively with glass and resin, started experimenting with the materials during her studies, and remembers being immediately impressed by their versatility. She soon started adding colour to the mix and found that the effects, especially when combined with light, were nothing short of mesmerising.

“My fascination with glass and resin started simultaneously. I constantly have projects going on. Everything is a continuous evolution, you do one project and you find specific opportunities within that production – a way of producing or working with a material – and then that can be pushed again within a different scale for a different result. Basically, the projects just keep building on top of each other,” she explains.

Marcelis’ love of neon started in 2014, when she was invited to show in a joint exhibition with Dutch designer Luc Van den Broeck in a gallery in Copenhagen. It was there that Marcelis first presented Voie, a series of neon table lamps cast in solid resin cubes.

“At this point no one knew who I was, so the gallery really took a wild leap of faith on me. I was already working with resin, and somehow knew I wanted to work with neon. I asked myself ‘what is the unique quality of neon?’” A question to which she immediately provides an answer: “The light itself is the material, it’s really a physical thing. You could just have a single neon light on it’s own and it becomes the object, something you can’t achieve with LEDs, for example,” she says.

“For Voie, I wanted to see what would happen if you added another material to neon. I did a lot of experiments where I would mix different pigments with the resin. First it was about seeing what happens to the light when it goes into this other material, so creating this clear difference between light on it’s own and light in combination with another a material. Then at some point it evolved into the light being completely encased in resin,” she explains.

Voie quickly turned to Dawn, a collection of atmospheric floor and wall-mounted lights where the neon light never leaves the object. In the case of the Dawn lights “the difference in the resin, what happens within the object, is what manipulates the light,” she says. It’s all about manipulating light. A lot of my projects touch on this,” she adds.

For Filter, a series of lights commissioned by Hi-Macs, Marcelis worked in reverse, using light to transform the encompassing material. “I wanted to show something that you wouldn’t otherwise be able to see,” she says. “When the light is on it brings the textures in the Hi-Macs material to the forefront.”

Marcelis has recently started experimenting with interiors, working alongside renowned Dutch architectural practice OMA on projects in Paris and Berlin. Designed by OMA, the projects dazzle with mesmerizing materials and lights by Marcelis. The Repossi store, which opened its doors last year, flaunts a shining display of aluminium, laminated glass and mirrored panels, all crafted by our lady of the hour. For the entryway of OMA’s redesign of the KaDeWe shopping centre in Berlin, Marcelis used strips of lights in resin to create an ethereal sense of exaggerated depth.

This September saw the opening of her biggest interior project yet with the new Salle Privée flagship in Milan. Again, playing with resin and light, Marcelis drew from existing frescoes to give shape to a series of semi-transparent displays that radiate with colour, and a brilliance all of their own.

“I like working in different contexts,” she says. “I don’t want to feel confined to one thing.” When it comes to interiors “it’s about appreciating how you move through a space, of creating experiences. I don’t make anything mass produced,” she continues. “Like my objects, which are numbered or limited edition, the spaces I design are one-offs. I don’t want to make something you can buy thousands of.”

Marcelis has seen success relatively early on in her career, and is careful to point out that she has plenty still to explore. “I’m very cautious of not wanting to become this one-hit-wonder, and am constantly experimenting and trying out new material combinations. Next year there will be a whole other body of work that will be released, that doesn’t necessarily follow the same thread.”

She hints at metal being the material of choice in 2018. “I can’t say what it is, but it will definitely incorporate light,” she assures me.

For the diehard snowboarder-turned-designer, inspiration is as much in the eye of the beholder as it is in the physical world. “A lot of my projects are about mimicking things in nature, but in a very artificial and abstract kind of way. It’s about using your eyes and your mind, and not relying on Pinterest and those sorts of things for inspiration, because, inevitably, you’ll end up with the same designs as everyone else, and you definitely don’t want that.”