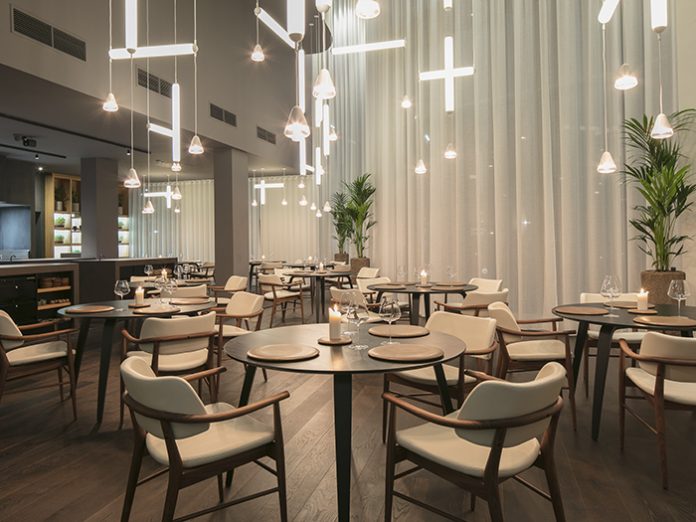 British design studio, James Roberts Design, has completed the interior for Mana, a restaurant experience like no other in the heart of Ancoats, Manchester.

The Chester-based design studio is known for taking on challenging and interesting briefs and this project was no different. The wide open space of the restaurant, with its high ceilings and open kitchen located in the centre, is arguably reminiscent of a place of worship, with an altar of food at its core.

Using strictly British produce and with a constantly changing menu, allowing the chefs to create interesting and ever-evolving dishes, Mana has caused quite a stir in the run up to its opening with dishes including fried reindeer moss!

Brainchild of Chef Simon Martin, an alumni of Copenhagen’s famous Noma restaurant, Mana is a celebration of British food with the principles of Noma.

James Roberts, lead designer on the project, spoke to darc about how the project got started: “We had just finished working on an independent restaurant here in Chester which Simon Martin had also been working on. After seeing some of our work, he asked us to get on board.

“Simon had a clear vision for the project and had identified a location in Ancoats, but needed direction to translate his vision. He needed a creative team involved to drive it.

“He had the brand name ‘Mana’ with the definition: ‘The power of the elemental forces of nature embodied in an object or person,’ and he wanted to celebrate British food.

“So we had a definition of Mana but as with a lot of projects, we had to think about where to go with it. Using the background of Noma and Simon’s pictures and renderings of the building, we were able to pick up and run with an aesthetic we felt ticked the boxes.”

One of the biggest challenges the team faced was the building itself – a huge manmade box of glass, steel and concrete, located in the middle of Ancoats, an area of Manchester that historically became a cradle of the Industrial Revolution and as such, is still quite industrial. This needed to be transformed into a space where people could feel in touch with the elemental forces of nature.

“The restaurant building, the buildings around it, and the apartments above, smacked of new build and we contemplated how we were going to create Simon’s vision in this setting,” Roberts continued. “It’s an impressive eight-storeys high and the red brick reminds you that you are in Ancoats. It has its own character, its own identity and we weren’t trying to address that, we were looking to focus on the definition of Mana, on the food, and create an almost international setting.”

In order to create a space that transcends its location the design team had to find a way to shield the diners’ eyes from the outside world. Initially, this proved difficult to achieve due to enormous windows that curved along the exterior of the room.

“There was this huge glass window that left the build very exposed and worked against our vision of creating something natural and hidden away. We wanted diners to walk into an intimate space, an oasis, away from it’s urban setting. Almost like stepping into a wardrobe and finding Narnia.

“From an early stage we wanted to put curtains in place to make the glass wall translucent enough that you could tell something was going on inside but you couldn’t really capture what it was. You had to go inside to experience it. You weren’t shut off but it was certainly enough to tease and create privacy once inside.”

Installation of the curtains created a private restaurant in a bustling Manchester setting while allowing natural light to pour into the space. This helped strike a balance between nature and architecture, something Martin was keen for the team to incorporate.

“Simon made it clear early on that the word ‘cavernous’ was something to think about – implying nature and architecture,” says Roberts. “This was something we really focused on, but, at the same time, wanted to pay homage to people, and the word ‘cathedral’ came to mind. By creating this cathedral, this worship of food, we were blurring the line between nature and architecture. The lighting was a huge part of that.

Inspired by a friend’s work, Roberts had the idea to create a dramatic ball of energy that could help represent Mana and become a huge feature in the room that created ambient light and drama.

“Unfortunately (and fortunately in the end) budget and time forced us to look for an off-the-shelf design. While going around various lighting shows and design festivals I remember seeing the Puro-Single Brokis lights and thinking that I could do something sculptural with them. We decided to hang a large quantity of them in the space and have them cascading down creating shafts of light, almost like laser beams.”

The Puro-Single Brokis light is a boldly minimalistic variation on atmospheric pendant lights. The collection comprises of a vertical or horizontal light tube where the vertical tube has a single bell light suspended from it and the horizontal has dual bells suspended from it. The diffused glow of the tubes combines with that of the bells to elicit a dynamic ambience, while the alternating gloss and matte finishes provide a degree of provocation.

“We created the ambient light with the pendants; we used them to create the task lighting for the tables, and we created the aesthetic and feeling that we wanted, all from the same pendants. As a result, we were able to minimise the supportive architectural lighting.”

As such, a simple, clip-in, roof adaptable XAL lighting system has been installed over the kitchen space, which ties in with the plank flooring and furniture.

“Outside of that, we’ve got some spots at the high level, around the perimeter where the curtain is, to shine down on them and give them a bit of drama. But, largely speaking, at front of house, Brokis is the only light source.

“The drama of it all is key. The air conditioning creates a bit of air flow in the restaurant, which moves the lights and the curtain a small amount and reminds you that they are there. That dynamic is the definition of Mana. As you walk around the space, you also notice how all the horizontal lights cross the vertical spaces and create this place of worship, cathedral feel with the light installation gives the illusion of religious cross.”

When asked if there was anything he would change about the space, Roberts told darc: “We definitely had to sway in places but we hit everything that we wanted to. I’m really happy with what we’ve pulled together and done. Coming from a product design background, the importance of getting things right the first time is key. We convince the client that if they give us the time to plan everything out in the beginning, and consider all the ‘what ifs’, then we can negate any complications further down the project.”