Acting Editor Sarah Cullen sits down with Architect Malay Doshi to discuss the renovation of his own private residence with decorative lighting features from Flos and Crystal Palace.

Along with designers Arihant Bajaj and Tejashree Karande, Malay Doshi, partner at Saransh Architects, based in Ahmedabad, India, has transformed his two-bed apartment into a designer’s fantasy studio living space.

Stripping the space back to its bare minimum, including the removal of partition walls, bathroom facilities, the kitchen and flooring, there was a conscious decision of creating a space that was minimal and at the same time tactile. As such, a majority of the materials chosen were done so based on how well they age.

Upon entering the apartment, the floorplan is completely exposed, with the only door closing off the bathroom, which is even styled with fluted glass to allow maximum light flow throughout.

Using colours and textures, the team demarcated the space’s use, using grey tones in the kitchen and toilet and wood tones were used in the den to create a more intimate atmosphere. “The kitchen and the toilet undertake only grey tones, hence creating ‘niche-like’ spaces inside the lighter white and grey general areas. The den is made of wood to give a cosy vibe, and the volume of this space is reduced drastically to give a sense of entering a different realm, which is further exaggerated by the need to climb a couple of steps to enter it,” says Doshi. “Finally, the sleeping area, is made much warmer with beige walls and a more playful floor in tones of blue. This gives it a very different aesthetic inside the house, giving it a personal touch.”

When considering the lighting for the apartment, Doshi worked with architect Mansi Mistry to obtain her expertise on customised prototypes, product selection and placement. He also took this renovation as an opportunity to play with various customisations of decorative lighting.

“Considering the tones and use of the space, the light was designed accordingly,” he explains. “For example, the two brass lights in the wooden backdrop were kept at two heights with one almost at floor level, to address the floor seating on one side of them. The frosted glass globes were chosen to create an ambient glow in the space. Similarly for the bedroom, the two spheres: one stone and one light on the yellow lime backdrop were chosen for a similar ambient glow. Whereas the extra recessed kitchen counter lights inside the metal cylinders, were done so consciously to create three separate spots of light on the wooden plank.” 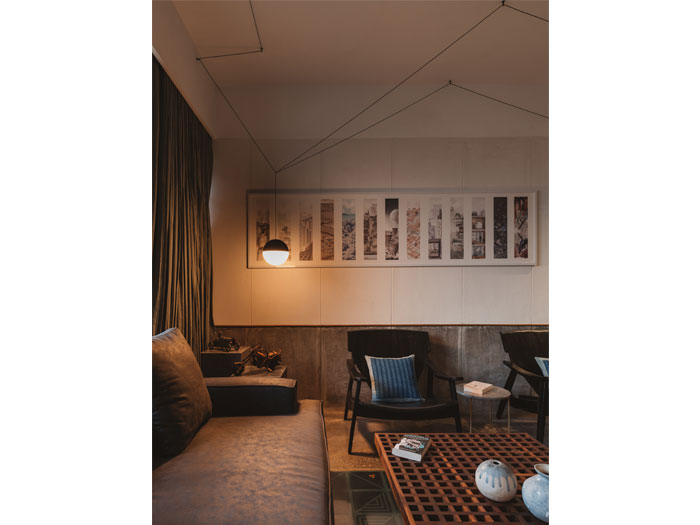 Referencing these custom designed fixtures by Ahmedabad-based decorative lighting producer Cyrstal Palace, Doshi also featured Flos pendants in the living space. “One [Flos string light] is in the corner, which is a sphere to create an ambient glow and the other, a cone, is above the dining table to give a down light. These were also chosen because they could be customised with their assembly and create this juxtaposition of black lines on a white backdrop of the ceiling,” says Doshi.

Referencing the use of both architectural and decorative lighting in his home, Doshi adds: “Both of them work to create two separate moods in the space. The decorative lights create an overall ambient lighting across all spaces in the apartment, which are usually the only lights that I turn on everyday. The architectural lights create a brighter lit space, which are used only when there are guests.” 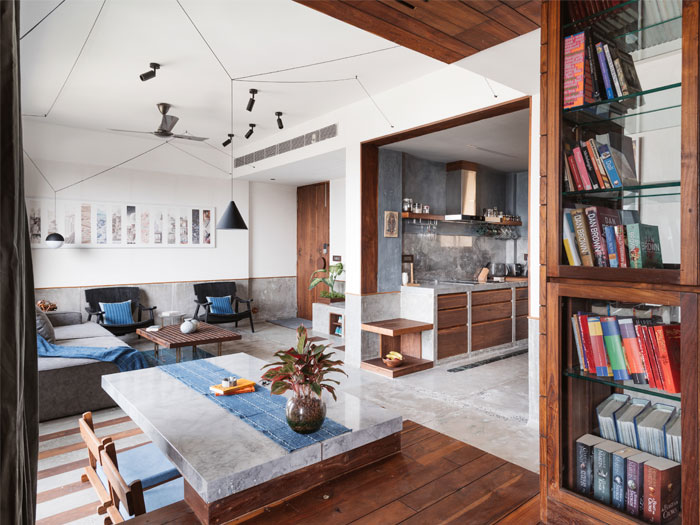 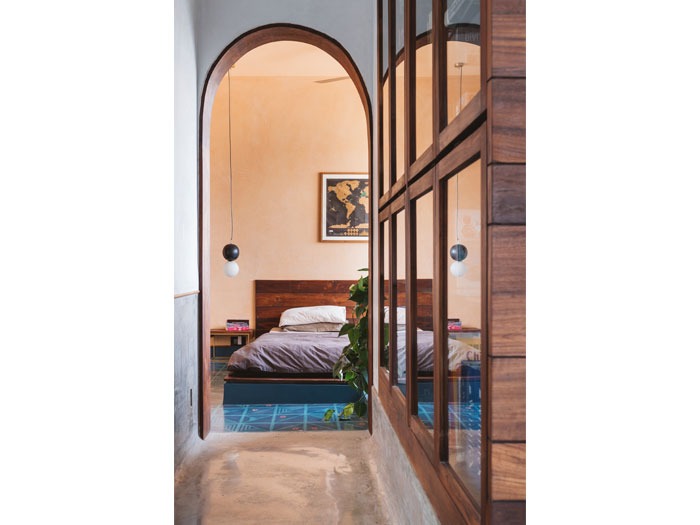 Moving into the bedroom, Doshi explains the difficulties of installing the customised Crystal Palace globe pendants: “There was a stubbornness in picking solid stone globes in the bedroom above ceramic or metal, for the want of a certain texture to their surface. This led to that specific light becoming quite heavy, which then further led to the need of a structural rope wire anchored to the RCC slab to hang it,” he explains.

The importance of juxtaposing textures is a theme that runs throughout the space. As Doshi explains further, the “entire flooring is polished concrete with different inlays, like wood, stone, cement tiles and brass. The polished concrete is filleted onto the wall up to the sill level, to give a sense of being inside concrete rather than being on it. Different greys explored, to go along with the concrete, include a grey polished marble and three types of grey fabrics used in the soft furnishings.

“The only coloured accents used in the project in shades of indigo and turquoise, are in the ceramics, cushions or shear curtains. All the walls have a pigmented lime plaster finish, which not only keeps the house cool in the hot weather of Ahmedabad, but also gives a timelessness to the space.

“The wood used is reclaimed 60-80 year old Valsad Teak from the ‘Pols’ of Ahmedabad. Not only is it more sustainable, the aged wood has an inherent rich texture.”

He added: “Leading away from the generic chic finished urban homes, a conscious choice was made to keep the ‘end product’ unfinished; to make the house an oasis in the middle of the city, similar to the natural ever-changing sense of space of a vernacular cottage.”

Reflecting on the final outcome of the renovation that took six months to complete, Doshi concluded: “Being a very personal project, the freedom to go into a previously unachieved customisation to achieve the initial idea was a standout feature here. Although the same effect could have been achieved through simpler solutions and minor compromises, the impact left by achieving exactly what was intended left me with a certain level of satisfaction which wasn’t felt before.”