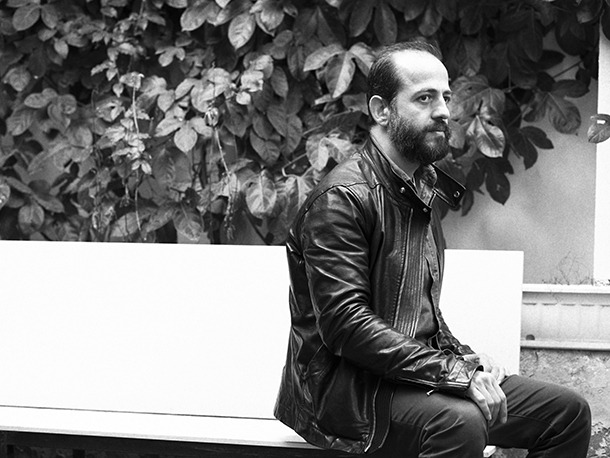 This year’s London Design Festival saw the Atrium showroom open its doors to the international design community for the launch of a new FLOS collection, including lighting pieces from renowned designers Michael Anastassiades, Jasper Morrison and Piero Lissoni. In this exclusive interview with Michael Anastassiades, darc discovers a man that is humble in both his approach and achievements, finds inspiration from the arts world and is very much “enjoying the moment.”

With no one in his family involved in design, as a child, there was little opportunity for Anastassiades to be creative. Growing up in his father’s home country of Cyprus, having moved from Central Africa when he was five-years-old, it was here that he went to school and later completed military service; once old enough, he embarked on a journey to the UK that would see his career in design begin to take shape.

With no previous encouragement to pursue a career in design, Anastassiades began his life in the UK with a civil engineering degree at London’s Imperial College. “This seemed appropriate at the time,” he tells darc, “but half way through the course I discovered the Royal College and it was a completely different world to me.” Having been inspired by what he had seen, Anastassiades set himself a personal goal that after graduating at the Imperial College he would pursue a Masters at the Royal College, “this is where I really became exposed to a design education.”

Anastassiades really wanted to get involved with something creative at this time, having felt frustrated for a long time by the lack of opportunity. “This exposure to the creative world was overwhelming. It didn’t matter to me at the time what I was doing and so a general design course seemed like a balanced option. It was more of a natural progression from what I had done before, for me it was more about the exposure to that world rather than the details.”

Reflecting on some of his earliest designs, Anastassiades tells darc how he felt everyone around him had been in the design world for so much longer than him, completing bachelor degrees in design and so on. “It really was my first opportunity to learn about design and there were some great ideas out at the time. My degree project ‘Message Cups’ was interesting and I actually developed it into a limited edition piece.”

It was the early ‘90s, well before the widespread use of mobile phones and SMS communication and ‘Message Cups’ was a product designed for communicating in the domestic environment. “I was very interested in the role of electronics and how these affected our lives, the cups were used for the exchange of messages and obviously at the time, it was a very experimental project.”

Anastassiades’ designs have naturally moved on since these early days, including everything from chairs, to mirrors, tables and of course lighting among many other product ranges. But what is it that keeps him inspired? How does he continue to reinvent himself?
“I wouldn’t say that I ever had a role model I aspired to,” he says, “it was more that I was inspired by anyone that had something different to say. While I value the work of a lot of designers, I relate to the work of artists much more, as I find it so free and interesting.

“The creative process is an interesting one and I have been able to create a platform that is free in terms of creating products, but I also think great designs can come from a place of discomfort and restriction.

“Sometimes when finances are tight (and back then things were) it makes you creative in a different way – not necessarily better or worse, just different – the results are equally interesting. I feel lucky to now be in the position where I’m free to produce and create in the way that I do.”

And through his collaboration with FLOS Anastassiades has learnt what it is to work with light; designing beyond the structural qualities of the object and looking at what happens when you turn the light on and off. “It has to work in two very interesting scenarios. When you turn a light on what happens is something completely different and you have to work to the perception of what you’re seeing is different. The light, the actual space that it occupies changes; the shadows its casts; how you move and how it relates to the space, all of these things are kind of powerful and there’s something quite magical about them – this is what attracted me to light.”

Lighting does not come without its challenges though and for Anastassiades it is necessary to distance himself from technology in order to design.

“You need to see the object from the poetry it has to offer and as soon as you don’t restrict yourself by technology I believe you can produce something great.

“I get frustrated by some of the developments in lighting technology. Lamps that have been discontinued to make way for LEDs; certain discontinued light sources were really beautiful and poetic in terms of their qualities. It had to happen of course, but the rate at which it has happened, has resulted in such drastic development of lighting technology that at times I feel frustrated, because it’s difficult to find the right light source for the designs.”

Anastassiades first met FLOS CEO Piero Gandini in 2011 during Milan Design Week – also the first time he had taken part in Euroluce, presenting his designs. Anastassiades was working on the String light design independently at this time and it was from here that the pair decided to collaborate… The rest is history, as they say! “It was one of those unexpected moments, there was no intention from either of us to pursue a collaboration in that direction, it just happened – the timing was right. I was also operating from a place of freedom in that I had my own company and could easily produce my own designs but I was interested in working with a bigger company that could realise certain ideas in a different way.”

Three new designs from Anastassiades were presented during London Design Festival: Captain Flint, a multipurpose, free-standing luminaire – the head of the fixture rotates through the vertical axis around the stem, allowing for ambient uplighting or a directional light source for reading. The notion of balance is prominent in this fixture, with the cone shade resting delicately on the stem; Copycat follows on from the success of the IC Light family, drawing further inspiration from the spherical shape. It is a sophisticated, simple piece, ideal for very different interiors and décors; a table lamp providing diffused light, it is made of two touching spheres that hold each other up in a delicate and poetic balance; Extra represents the purest form of elegance and is available in gold, brass, dark steel and polished aluminium to create mystery and depth in any interior.

“I would never consider working with anyone else in lighting,” Anastassiades tells darc. “Once you have a platform and freedom to create it’s superb to be able to operate in this way.”

Looking ahead for Anastassiades, while he doesn’t have aspirations to change the world or design a spacecraft, he is very much enjoying the moment and where he’s at right now. With some great collaborations and companies to work with, he comments: “I feel very lucky and excited to have the opportunities I do. Light exists in so many beautiful ways in nature, it’s something that’s always existed, even before humanity. I don’t think in artificial lighting you can ever imitate this beauty and we should consider ourselves very lucky if we are able to capture one of these beautiful moments.”