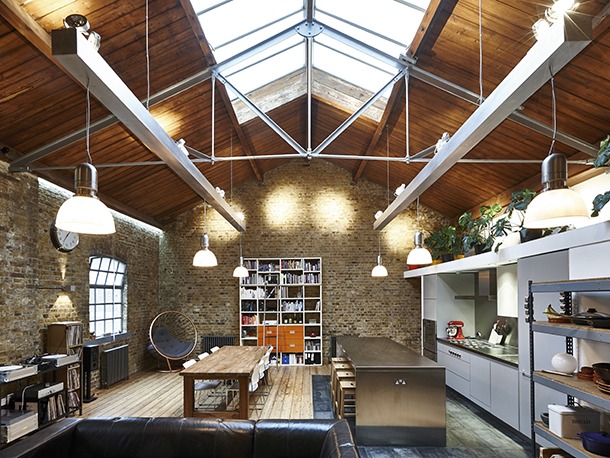 When world champion kickboxer Jon Lawson turned his hand to creating high quality cuisine, he learnt to perfect his craft under the watchful eye of Theo Randall of London’s The Riverside Café. And when the time came to create My Loft Kitchen, an intimate, high quality dining experience and part time pop-up restaurant in his private east London warehouse apartment, he looked to the talent of Ben Rousseau and his team at Rousseau Bespoke Design.

The space was split into four zones; the preparation area with clear task lighting for diners to view the chef’s skilful work; the dining zone; the DJ area; and a personal lounge space. These areas work individually and together to create a wholesome dinner party experience.

For Rousseau, the high vaulted ceiling with its industrial steel girders running across, dictated the initial design concept.
“By the nature of how the customer wanted to use the space, it made sense to create two six-metre-long custom fabricated aluminium joists that we could suspend from the ceiling via fine steel cable and mount four pairs of directional twin 3,000K uplights,” Rousseau tells darc. “This allowed us to show off certain feature areas and reflect a warmth off the timber ceiling cladding in order to make the space feel very cosy and intimate, celebrating the industrial architecture of the space. It also allowed us to hide all of the digital control units and dimming modules from Rako for the AR11 multi-directional spot lights.”

For the different zones, three pairs of industrial pendants provided by the client were tidied up and rewired by Rousseau, with E27 lamp fittings and large LED squirrel globe lamps with a sand blasted glass shade.

As the client already had galvanised steel conduit feeding certain light fittings, Rousseau and his team added a few more runs in discrete locations to feed the new light features. Up / down LED wall lights were positioned to add interest on the walls, below a cooler white LED strip light creating a halo effect on the timber joists running close to each wall. As the warmth from the brick and timber structures needed to be highlighted, Rousseau used different temperature lighting to add dimension and detail.

“We hid the light source behind a timber joist that ran along the very top of the wall as I usually like to conceal the source,” Rousseau tells darc. “In between the windows is a DJ booth, to which we also added detail by using two up / down lights in the same 3,000K range with a wide beam below and a focused beam going upwards, to frame the wall around, and above the DJ booth.

“Each of these items were set at good levels in the Rako control system so that the customer has very flexible pre-sets for the different functions of the zones, both collectively and as individual areas.”

As it should do, the lighting in the loft kitchen makes the space come alive, celebrating the features and providing flexibility that enhances the user’s experience. “The new baulthaup kitchen now sits among a collective of good design, function and desirability,” says Rousseau. “With good lighting, the clever trick is making it work without anyone really noticing.

“From the beginning, the ideas were really focused and then executed really well with the help of my electricians at Harpenden Electrical, who were brilliant and efficient as usual.”

Reflecting on the project, for Rousseau, this was a job well done and while accessing the building with the huge customised joists was a challenge, there isn’t a thing he would change. “I think it works really well, the customer is very happy and I think it delivers everything I expected it to,” he says. “It is a huge leap from the static, gloomy fittings that were there originally.”