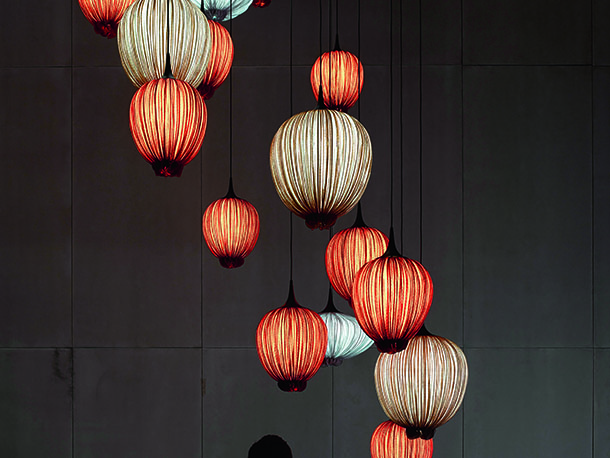 Nafis restaurant sits within the thriving entertainment district of Mabat in Rishon Lezion, Israel’s fourth largest city, located just a few miles to the south of Tel Aviv. In May this year, the restaurant’s owners commissioned a new light feature to fill the atrium space that cuts through the venue’s two floors – providing a visual link between the two.

After seeing images of ‘Pyramid’, a super-sized silk pendant piece installed at a venue in Las Vegas, they contacted its maker Aqua Creations to request a piece that would deliver a similar ‘wow’ factor.

The design team at Aqua responded with ‘The Silky Way’, a combination of pendant pieces from the company’s existing portfolio, brought together in a unique configuration. In total, twenty shades were used: five Redwood coloured Dippa pendants alongside twelve of its Rust coloured sibling, the Dippa Son, and three Silver Suuria pieces. Each comprises a skin of pleated, pure silk stretched over a metal frame, with CFL lamps at its centre to give the installation its gentle glow.

As the name suggests, this seemingly random configuration of pieces was inspired by the Milky Way, that thick streak of stars of different sizes and brightnesses that together form a single harmonious presence in the sky. By abstracting this idea and translating it for this indoor atrium, Aqua Creations provided a thematic link with the night outside.