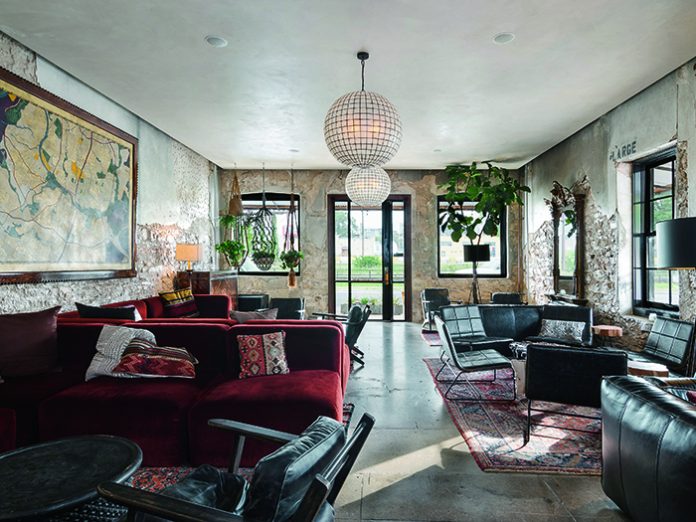 The Native is a boutique hostel, café and event space designed for the epicurean traveller and locals alike. It is nestled in an existing two-storey late 1800’s stone warehouse and a mid-century brick warehouse right in the middle of the upcoming transit-oriented development adjacent to downtown Austin, Texas in the US.

Un.box studio utilised of rich palette and textured materials, a theme aptly referred to throughout the design process as ‘dark and stormy’. The result is a truly unique communal experience that offers affordable rates with impeccable style at the nexus of development in Austin.

Owners of Native, Michael Dickson, Antonio Madrid and Will Steakley approached principal designer at Un.box, Jared Haas when they first obtained the lease to the property. “The owners did not have a fleshed out concept, they initially thought it would be a boutique hotel and were circling through many different programmatic concepts,” says Haas. “Regardless, we were all set on creating a community and a culture. The owners started to realise that the market for high end boutique hotels is over saturated the affordability crisis in Austin doesn’t just affect the locals, it affects tourists too, so starting a hostel was the best solution.”

Un.box Studio spent about six months fleshing out the different concepts within the existing space, locking down a final concept proved a challenge, “we truly believe in a think twice, act once policy when it comes to design but in this case it was think 10 times, act once, but the extra effort shows.”

A lack of historic buildings in the area made the property a sought after space and the designers worked hard to preserve its historical charm. Certain areas were left untouched or exposed, historic etchings and stencilling are left on show and the building’s original stone, brickwork, wood and steel structure can be found throughout the building.

“Most projects in Austin are newly constructed, relative to other cities in the US,” says Haas. “Austin does not have a strong building history. There are very few older buildings standing or buildings that were built well. It was important that we not only preserved as much of the existing elements as possible but to celebrate its beauty.”

The rooms are an eclectic mix of old and new, tied together with the eventual dark and stormy concept. The lounge area features leather seating, fabric sofas, patterned rugs and hanging plants while the oversized 1960’s inspired Capiz shell globes by Restoration Hardware lend a softness to the space, facilitating the feeling of home.

The café and bar area opts for deep blue banquettes illuminated by Barn Light Electric Wesco Gooseneck Lights, modified with gold leaf to give them a warm amber glow. The dorm room’s feature bespoke steel bunk beds equipped with privacy curtains and nautical inspired CB2 globe pendant lights. With the main part of the building being a former warehouse, there is very little natural light in the space so the natural light that was available had to be utilised carefully and a dark and stormy theme was adopted in the darker areas of the space.

“We placed the café in the one space where natural light was most abundant and added skylights in the main communal space outside of the bunk rooms. All other spaces were intentionally left dark with very dim lighting to help create a soft and warm mood,” Haas says.

The lighting had to turn from day to night seamlessly, something designer Joel Mozersky considered carefully. “Originally there were a lot of custom fixtures designed, due to budget and other constraints some of those were edited. We did end up designing the sconces with Warbach Lighting and Design and modifying others, though I would have loved to be able to commission more custom lighting but ultimately it turned out great.”

Although the venue is open, the concept is still considered an experiment and is constantly shifting. The owners recently acquired the adjacent vacant space and have turned it in to an open event space, which host’s musicians and DJ sets weekly and is also available for the general public to rent.

“There are a few ideas that we floated with the owners that we agreed to put off into later phases,” explains Haas. “In particular, we wanted to create an outdoor garden/event/ café space with a pool. We typically design our projects to tie our buildings interiors with the exteriors and I would love to open up the back of the hostel to tie it in to a communal garden area per our initial intention. Fingers crossed that it could happen in the future.”