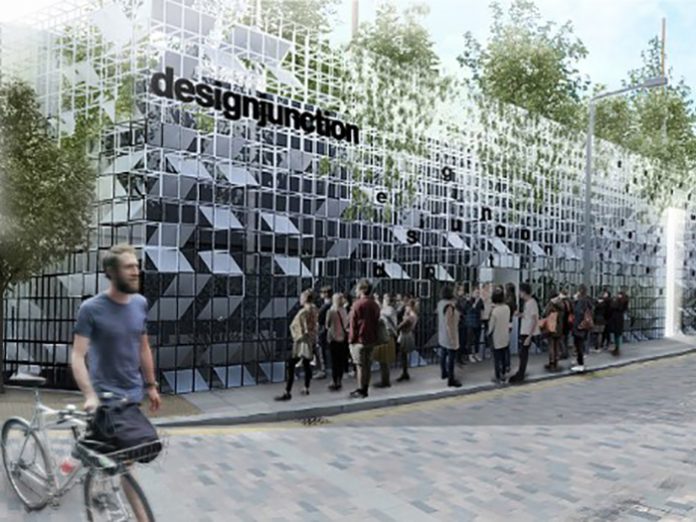 The London-based practice has designed a 70m long by 7m high façade entrance to Cubitt House, the trade destination at designjunction during this year’s London Design Festival.

Designed by leading architectural firm Satellite Architects alongside Danish design curators, Icons of Denmark, the team will use the modular and versatile GRID system by Danish designer Peter J. Lassen.

Cubitt House, located on Lewis Cubitt Square within the King’s Cross redevelopment, sits on the boarder of the latest phase of construction. Spanning over 2,500 sqm, this two-storey temporary structure will house more than 100 leading international furniture and lighting brands.

Satellite Architects were inspired to use a scaffold-like grid system to wrap around an existing screen of trees and bushes. To achieve the sharp, elegant and well-defined structure, the architects are using GRId – a multifunctional modular interior system that allows creators to build with maximum freedom and simplicity. Introduced to the UK by Icons of Denmark, GRID can be assembled in various way in height, width and length and the cubic frame is produced with mounting holes making the system versatile.

The façade created by Satellite Architects at designjunction will comprise over 4,000 lightweight, versatile modules with 12mm nylon frames, transitioning from black at the base to white at the top against the sky to create a pixelated effect. The GRID system also holds an array of panels, orientated to reflect or provide glimpses of the foliage beyond.

Founding Director of Satellite Architects Stewart Dodd said: “The façade is intended to reflect the temporary nature of designjunction as an exhibition, and the developing surroundings, combining the natural and artificial elements. The arrangement of the pixels directs visitors to the entrances where reflective elements multiply the structural presence of the façade.”

Jesper Jensen, owner of Icons of Denmark added, “We are proud to be working alongside designjunction once again and collaborating closely with Satellite Architects. Assembling over 4,000 black and white GRID cubic frames, this will be the largest installation of GRID in the world.”

Visitors to Cubitt House at designjunction will be fully immersed in design as they enter the building under a stepped down gridded canopy between mirrored panels. Having passed though the exhibition, visitors can also enjoy a secret garden space with a pop-up café at the back.

designjunction, now in its sixth year, returns this September as part of the London Design Festival. Relocating to a new long-term home in King’s Cross, designjunction will take over the majority of the site delivering a specially curated programme of design exhibitions, installations, retail experience, events and workshops based upon the leading theme, Immersed in Design.