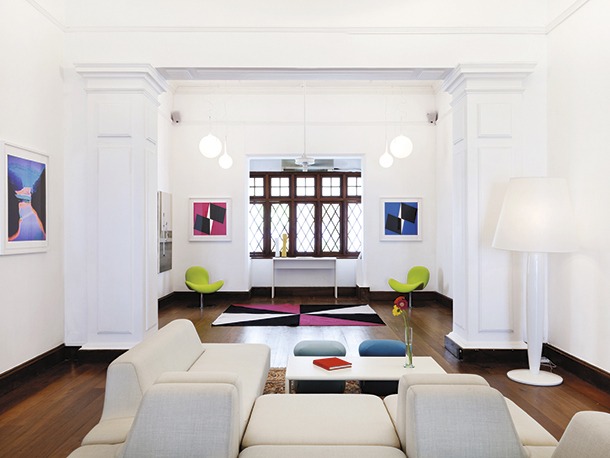 It’s easy to overlook the importance of a nation’s overseas emissaries. Though most ambassadors only come to public attention during times of intergovernmental tensions – recalled or expelled as an expression of political will – their true worth is far subtler. In addition to providing a smooth conduit for political discourse, they play a vital role in developing and promoting a national brand. The benefits of this come not only as tangible increases in global trade, but also in the development of so-called ‘soft power’ – the use of national cultural identity to improve sway in the international political and business spheres. As a venue for meeting and entertaining, the ambassador’s residence plays an important part in this process. No one knows this better than the Norwegian Government who have undertaken a program of improvements to turn their official residences into cultural outpost that immerse guests in the very best of Norway’s homegrown craft and design.

In 2009, the Royal Norwegian Ministry of Foreign Affairs awarded a two-year tender to Norwegian interior design agency Dis, contacting them to undertake a series of projects in government spaces around the world. Such was their success in the role that the Ministry has since extended the agreement into 2012.

Dis’s work began with the Official Residence in Colombo, Sri Lanka. The team of two, Solveig Baalsrud Svoor and Ine Bangås Johansen, were given a very open brief on the project. “We had never worked with an official residence, and the client wanted to use this as an advantage and not put too many constraints on us, so we would be able to see it with new eyes,” says Baalsrud Svoor. The one proviso was that the majority of the furniture, lighting and other essential elements should in some way promote Norwegian design.

Their approach was to preserve the building’s traditional character but contrast this with feature pieces that expressed Nordic tastes. Colours were chosen that would emphasise the Scandanavian designs, but were at the same time inspired by Sri Lankan traditional clothing and their rich natural landscape. General lighting was provided locally, but Dis had the task of choosing feature lighting that could be used to create different moods within the different rooms of the residence.

Some of the lamps – such as the Big Mama from Northern Lighting, located in the living room – add an element of humour to the space. A large floor lamp, Big Mama is made out of paper and wood, considered appropriately basic and eco-friendly ‘Nordic materials’ by the Dis team. An illuminated moose head wall light – Moo, designed by Trond Svendgårdh and Ove Rogne – hangs in the dining room like a kitsch hunting trophy. As well as being a clever conversation starter, the piece works well with Camouflage, the pendant that hangs above the dining table. This piece throws out a scattered pattern of light and shadow reminiscent of the Norwegian forests that make up the moose’s natural habitat.

Snow white drops of Artemide Castor pendants hang in the hallway while the lunch/meeting room is given a splash of colourful stripes thanks to Zero’s PXL pendant. In the library-cum-office a cluster of Established & Sons Torch pendants – PVC dipped polymer cones with clear, diamond textured polycarbonate diffusers – provide top lighting whilst a Luxo L1 desk light adds a classic touch. More recently, the Dis team completed another residence, this time in Tallinn, Estonia. The design philosophy remained the same, though with a different climate and cultural location the end result was stylistically specific to host the city. Some pieces used in Sri Lanka make a reappearance: the Big Mama standard lamp stands guard in the living room this time joined by Northern Light’s Bender, a big-headed floor/reading lamp with a thin metal stand that coils up from the floor like a length of kinked rope. Modernica’s reissue of the Saucer Pendant- part of George Nelson’s 1950s bubble lamp series – hang from the room’s existing ceiling roses.

In the hallway, three glazed-porcelein Bell pendants hang with cables intertwined. The muted tones of their exterior, inspired by the rocks and plants of Scandinavia, contrast elegantly with the pure white of their inner surface. Berg wall and pendant lights in the dining room supply obvious symbolic links to Norway’s ice fields while above the dining table hangs a Hope pendant. Part of Luceplan’s collection, Hope has polycarbonate petals formed by Fresnel lenses that optimise reflection and refraction to scatter thousands of ‘icy’ shards of light across the space.