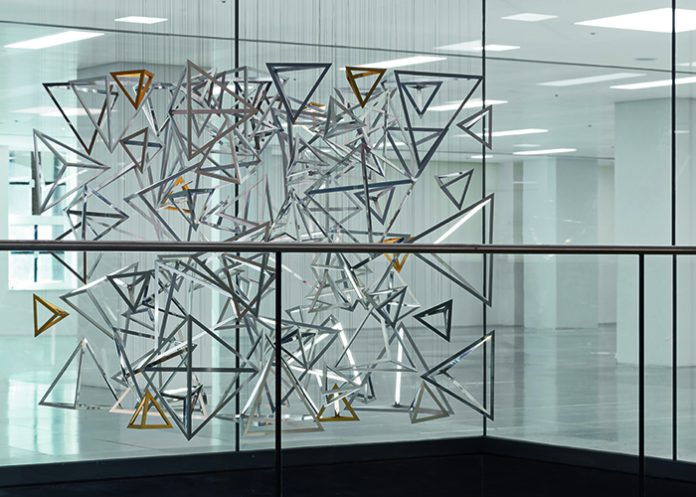 20 Old Bailey in London is an immaculate workspace set around a pioneering ‘arterial street’, creating its own bustling community and consisting of 235,000sqft of exceptionally designed office space.

At the heart of the building’s atrium are two statement light installations from British lighting design studio BY LUUM. Each housed within a glass tree pit that extend from the ground floor to lower ground level, the installations – entitled ‛Order and Chaos’ – reference the inherent historical context of the area and are juxtaposed in style.

Commissioned by international design practice BDP, on behalf of architects Buckley Gray Yeoman and developers ISG, Tom Niven at BDP commented: “As concept designers, we approached BY LUUM to work collaboratively on the two installations for 20 Old Bailey. Responding to a tight timeframe, we quickly developed a proposal using ‛Bangle’ from BY LUUM that met the brief of ‘Order and Chaos’. The two sculptures reflect the context of the surrounding area; the South atrium forming a giant ordered cube from 100 elements and the North atrium directly juxtaposed with Bangles exploding across the space.

“Light was punched up from the lower levels to illuminate the sculptures but also create a play of light and shadow on the soffits above. The finishes were chosen carefully to ensure some elements appeared bright, whilst others reflected light at all angles, adding a sparkle as viewers moved between the two final sculptures. Luum’s technical expertise was invaluable in the process and the final installations delivered precisely.”

Developing the project in partnership with the client, which in turn aided the smooth delivery of the project, BY LUUM’s Creative Director Chris Fox talks darc through the installation: “The main challenge for us was delivering such a large project within the lead time, while keeping to our usual high standards; a very meticulous approach was required behind the scenes. ‘Order’ for example made use of 100 ‛Bangles’, which means there are 300 ceiling points, each with specific cable lengths that had to be carefully coordinated when installed. One wrong cable and the installation would have been out of position.

“The scale of each installation evolved over time,” says Fox. “Order became more compact as we progressed, while the looser formation of Chaos, which was mocked-up in several arrangements, allowed our interpretation greater flexibility due to its more random nature.”

As mentioned, the desired effect of ‛Bangles’ is to reflect the light off the many facets, creating tones and casting complex shadows in the space. While the installation can be offered with integrated LEDs, for this installation BY LUUM used plain lengths and so it was vital to illuminate it as a whole in order to enhance the striking interaction with light. The properties of the matt finish also allow it to hold the light while intermittent polished ‛Bangles’ were used for their reflecting and refracting qualities.

BDP was responsible for specifying the lighting and ensuring the light output, colour temperature and beam angle was suitable for both installations, while the layout of the lighting in the floor was customised to suit each layout – ‘Chaos’ spans almost four metres compared to ‘Order’s’ two.

Created from extruded aluminium, which is then machined to create the detailing and fittings, each ‛Bangle’ is then hand polished and finished by a local craftsman to any finish the client specifies – in this instance polished aluminium, matt aluminium and matt brass, as mentioned.

“With the exception of our glasswork, BY LUUM prides itself on the use of UK manufacturing for all elements of our installations to ensure our work is of the highest standard,” says Fox. “Utilising a combination of technology and craftsmanship, our network of manufacturers enables us to create imaginative designs and undertake complex custom projects in a wide variety of materials. The locality is crucial for regular production meetings, which allows BY LUUM to maintain our adaptable approach when creating bespoke designs.

“Watching an installation take place is a special feeling as a render can never match up to the reality of transforming a blank space in front of your eyes. With ‘Order’ the cube shape becomes more evident with every ‛Bangle’ you suspend, therefore there is always great satisfaction in turning your designs into life and taking that step back for the first time.

“We were extremely happy with the outcome at 20 Old Bailey, it has a real presence within the space and enhances the atrium’s role as a vibrant hub of the building, which itself is extremely impressive with large glass panels and black detailing rising up from the atrium – so naturally, the ‛Bangle’ installations stand out as the centrepiece.”

While BY LUUM has done many ‛Bangle’ installations in the past, the cube shape of ‘Order’ at Old Bailey was a new challenge for the team as it is usually specified to fill a space in a more random manner. This, according to Fox, created the complexity of designing a cube from triangular pyramids, creating 90º angles from acute shapes, all of which couldn’t touch or contain overlapping fixing points to allow the steel cable to hang true – essentially pushing the design team to work out an effective pattern through extensive mock ups.

Comparing this latest installation to previous works, Fox tells darc: “Having two opposing installations was new for us due to the fact they were purposefully unsymmetrical and designed to contrast with one another. The density and quantities involved also made it the largest ‛Bangle’ installation BY LUUM have done to date while the combination of different finishes in each installation gave it an added dimension.”