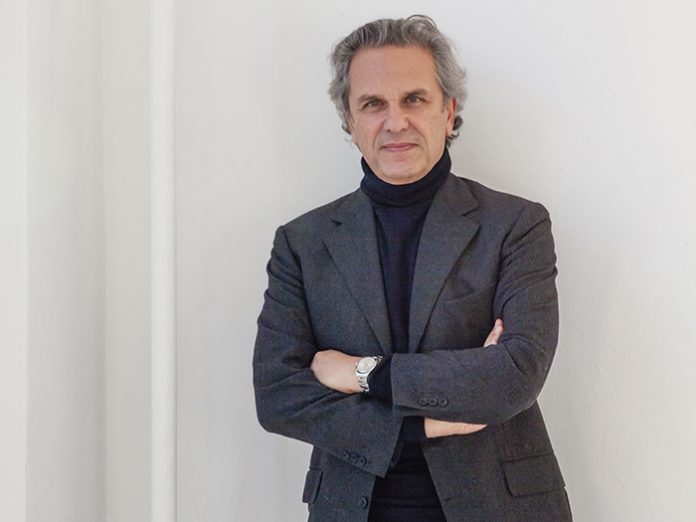 Born in Egypt, Patrick Naggar grew up in Paris, France in a family of art collectors. Exposed to modern art by his family from a young age, Naggar was often surrounded by influential creatives who played a part in shaping his creative thinking, in ways that he now employs in lighting design.

Visiting art studios and museums with family and friends such as Portuguese painter Vieira da Silva and British playwright Stephen Poliakoff, Naggar was destined for art and design from the beginning and went on to study architecture at the Ecole des Beaux-Arts in Paris.

“I considered architecture to be vital knowledge within art, interior and furniture design and held in high regard the way Italians view architects as being equally capable of designing interior spaces and products,” Naggar tells darc.

While studying in Paris, Naggar undertook an internship with an architect known for several luxurious buildings in Paris. Under the architect’s guidance, the budding designer was exposed to an array of craftsmen and skills of the French Arts Decoratifs movement in the 1930’s. “I resented it at the time as I was eager to be modern,” he admits, “but I realise today how important and instructive that training was – learning to design typical facades by hand with the correct orders and proportions.”

Having now developed a mature outlook based on his extensive training and experience, Naggar does not attempt to distinguish between ancient and modern and instead focuses on the difference between good and bad architecture. Aspiring to an international range of artistic figures such as Louis Kahn from the US to English architects such as David Chipperfield, Naggar aims to bridge the gap between classical and modern in his work. “I think the more modern we are, the more memory we need. There is nothing like a tabula rasa.” Seeking to connect areas that are usually kept apart, the French artist purports that humans are simultaneously ancient and modern and looks to cultivate hybrid and at times ambiguous designs.

This philosophy is seen in Naggar’s work from the beginning of his achievements in lighting design. Prior to the designer’s first work with Veronese ten years ago, he was invited to work with the CIRVA (International Centre for Glass Research) in Marseille, France. Here he designed an object representing Psyche, the Goddess of the soul in Greek mythology, which was a glass drop filled with water and illuminated with a small LED. With Veronese, a French manufacturer established in Paris in 1931, the company prides itself on its skills in the formation of luxury Murano glass lighting fixtures crafted in the tradition of French design. Naggar’s work with CIRVA joined harmoniously with his future work for Veronese in his drive to create hybrids between science, art, traditional and modern technologies. “The Drop series with Veronese is an avatar of this initial project with CIRVA inspired by Greek mythology,” explained Naggar. Inspired from the same source, the organic shape of Drop has been adapted as a table and wall lamp available in several colours evoking a light of myth and poetry to fill an interior.

Naggar’s most recent projects with Veronese have more of a scientific influence, such as the Orbe lamp for Veronese, taking the shape of the galaxy in wall sconces and table lamps. Most notable of his pieces blurring the boundaries between art and science is the Chromosome chandelier inspired by the DNA of a chromosome X, made by Veronese exclusively for display at furniture and lighting showroom Ralph Pucci International in New York.

“I was interested in translating an essential part of the human cell, one that carries information into an object with poetic license,” explained Naggar. “The double-coiled strands of DNA are materialised by fibre optics, which in the chandelier are represented by the light.” This chandelier exemplifies Naggar’s drive to create hybrid designs between tradition and modernity. The Murano hand blown glass shows how a traditional skill can be associated with a modern means of lighting. “Melding the traditional skill of glass blowing with a new way of using fibre optics is a new concept that introduces a new direction in lighting.”

With these creations in his arsenal, Naggar reflected on his time so far working with Veronese: “It has been a wonderful experience. This venerable house, which has produced works with French designer Andre Arbus and others since the early 1930’s, represents traditional Venetian glasswork while being open to exploring new avenues in design. It is a great artisanship rooted in history combined with a sense of innovation.” A match in theory and practise, Veronese has been a driving force in Naggar’s attraction towards lighting design. According to Naggar, lighting is the domain that has evolved the most in design recently, with new ways of using light to create ambiance and a strong symbolic value attached to it. This symbolism is what attracts him to lighting design the most, as it is after all the extinction of darkness.