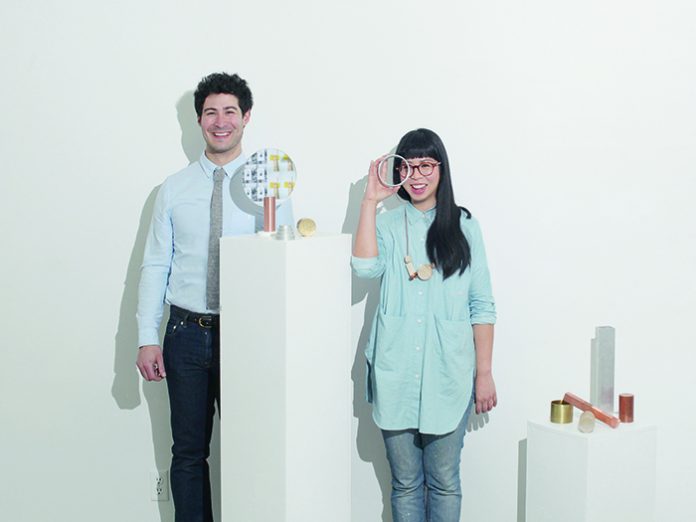 Jean Lee and Dylan Davis bring a balanced approach to product design, considering at all times a person’s connection with the object. Helen Ankers takes a closer look at their work with light.

Ladies & Gentlemen Studio is a multi-faceted design studio based in Brooklyn’s Red Hook neighbourhood. Founded in 2010 by designers Jean Lee and Dylan Davis, their aesthetic and design philosophy embraces complementary opposites with an unexpected balance of warm minimalism, playful austerity and simple sophistication. Blending resourceful curiousity with the desire to celebrate materials and functionality, the duo’s open approach to design yields an ever-evolving set of ideas and experiments collected from everyday discoveries, explorations and surroundings.

“It’s all about balance for us,” Davis tells darc. “Whatever we’re working on, we’re always exploring forms, ideas and materials and working out the best angle to express exploration in the most simple and pure form.”

“We tend to be inspired by movements with historical context or cultures rather than fleeting trends,” adds Lee, “and designs that evoke the most emotion or personality, which naturally trickles down into our own practice.”

Having started their journey together at the University of Washington, the duo met while studying industrial design; and as with most designers, the need to be creative, to ‘play’, and to experiment is something that has been ingrained in Davis and Lee from an early age. “I’ve always been really interested in art and cars and when I was a kid I wanted to be a car designer,” Davis says. “I would endlessly sketch all these cars that were ridiculous of course, but that was the moment that I remember being really interested in design and this evolved over time. My mom always wanted me to be an architect and both my grandpa and father built their own homes, which is pretty cool. I’m from Michigan and there’s a real attitude of making things and being industrious and it’s definitely rubbed off on me. If you want to make something you figure it out yourself and just get on and do it – you learn from the process. My dad was a bit of a hippy and built his house around a chicken coop, he kept adding little additions – I really admire his attitude towards it and I try and take that on board in my own design process.” And for Lee, it was actually her dad who pointed her in the direction of industrial design. “I was always interested in making things and being hands on,” she says. “And was always very into crafts and things like that but it was my dad who, when I was in high school, actually pointed out I could do something in industrial design… it wasn’t something I had explored but once I did, realised product design can provide a good balance of creativity while creating something useful and tactile.

“I think one of the big turning points for us was going to Italy as part of our course… it was a glimpse into what could be. There were all these artistic influences; people living their taking pride in having an item custom made; and for us to realise you could make a living out of designing and making your own products was refreshing.

“At that time in Seattle it was mostly corporate work… people would be applying for jobs under a bigger brand name or the designs were more about technology and we weren’t relating to it at all. Italy was an eye-opening experience – seeing the shops and studios working and selling, it was very inspiring.”

With other artistic influences coming in the form of mid-century Modernists, expressive 70’s Italian designers, and humorous Dutch designers, the pair find themselves most struck by designs that evoke a sense of emotional connection, which trickles down into their in their own practice to create functional, thoughtful objects with a sense of wonderment.

“A bit of playfulness always comes from within,” continues Lee. “While we explore and play around with the materials – we like to elevate the materials to the next level and I think the way in which we balance all of these different ideas gives our designs a level of unexpectedness.”

“The first light fixture we designed is a pretty good example of our approach,” adds Davis. “The Aura light was born from some metal rings we had lying around the studio… we discovered that when we held them up to the light a sort of simple, magical effect happened when the light reflected off the ring and from there a discussion began.”

The Aura fixture sees Davis and Lee pare down light into its two elemental ingredients – the source and its illumination (highlighted by a brass ring). The resulting pendant light is simple and versatile with the two available sizes looking just as striking hung individually at adjustable heights or in clusters and rows.

“Our explorations from there have gone in many different directions,” says Davis. “But we try to have a really elemental curiosity that drives the concept for each design.”

“For example, with the Shape Up lighting fixture we challenged the concept of a traditional chandelier,” adds Lee. “It was more about how we could create a new architecture… we were trying to create something playful yet elevated. This chandelier in particular was inspired by some jewellery pieces we had designed the year before; it was about these elemental shapes hanging asymmetrically. Lighting in some ways is like jewellery for the space, it’s like the statement piece that often brings the space together and creates an expressive element to it so we imagined the piece that way, we really enjoy having that flexibility.”

“That’s why it’s so important to us not to focus on one product type,” continues Davis. “In the studio we’re always moving from highly functional small objects to completely non-functional sculptures – it’s very important to us to always explore these different methods because they all inform each other.”

This considered approach soon attracted the attention of the design world, specifically Jason Miller, fellow product designer and owner of New York-based lighting brand Roll & Hill. And it wasn’t long before the two studios collaborated to produce lighting collections Shape Up and Kazimir.

“Jason first saw our work during New York Design Week in 2013,” says Davis. “But it took about another eighteen months before we landed on something workable for them. Looking back, at that point the work we were presenting was still quite unrefined and we’re still surprised now that he saw something in us back then… it really is a testament to his ability in seeing something in someone.”

“We kept producing all these ideas that we thought would be good for Roll & Hill but weren’t quite right and in the end he said to us ‘I asked you guys to design a fixture because I want a Ladies & Gentlemen fixture, not a Ladies & Gentlemen for Roll & Hill fixture’, that was the big turning point for us creatively,” adds Lee. “I don’t think we had the confidence to think of ourselves in that way at that point – offering our vision rather than just working to their vision. That moment was definitely a bit of a milestone for us, both personally and creatively.

“Jason was pushing us and wanting our design perspective on something and that was really refreshing – some companies you encounter might try and steer you to what fits within their company, but the way Jason worked with us was different – he trusted us a lot and wanted us to be more true to how we design.”

Shape Up is a versatile lighting series in celebration of geometric shapes and materials. The playful collages upend traditional notions of symmetry in favour of a dynamic spatial harmony. The collection’s abstracted lampshade forms are networked via connecting cords and hubs. The resulting modular system allows the shapes to be suspended and composed indefinitely in response to a space’s architecture and function. As if connecting the dots, the cord network graphically expresses the light source’s formal and electrical connection to each other.

The Kazimir collection was inspired by the late 1800 Russian artist Kazimir Malevich who created paintings often composed of flat, abstract areas of multi-layered shapes and compositions. The fixtures are the result of Ladies & Gentlemen’s increased experimentation with ‘complexity and layering’ and their interest in geometric abstraction and minimalism. Kazimir explores an ‘elemental complexity’ through a three-piece collage of textured and dichroic plate glass shapes arranged around an illuminated triangular frame to create new optical dimensions and effects. Individually, each pane is an unexceptional shape, but collectively composed they create fascinating effects that vary from each angle and lighting condition. The resulting arrangement celebrates layering of shape, texture, colour, and effect.‘Complexity’ lies at the intersection of the three elemental forms and invites one to interact with the piece by walking around it and see how the shapes and composition transforms.

Outside of their collaboration with Roll & Hill, Lee and Davis have been working on a lighting fixture launched last year called Float. More sculptural and minimal it captures a moment of suspension in space and implores combinations of the least, most essential elements working in concert to intimately define space with light and form. All forms exist to support and serve the other to direct soft glows and shadows into its surroundings.

“I think it’s our responsibility to make products that people own really special and something they can connect with,” says Davis. “Designers have the opportunity and responsibility to bring products to a human level and we try to reflect that in our business model and designs… I think it is a movement that’s happening right now, people more and more are seeing the negative effects of overconsumption and the throw-away culture and are becoming more aware of what they make and consume.”

“We don’t necessarily like to follow trends anyway, but as long as we can change the way people perceive and connect with objects on an emotional level that is what we will look to do.”