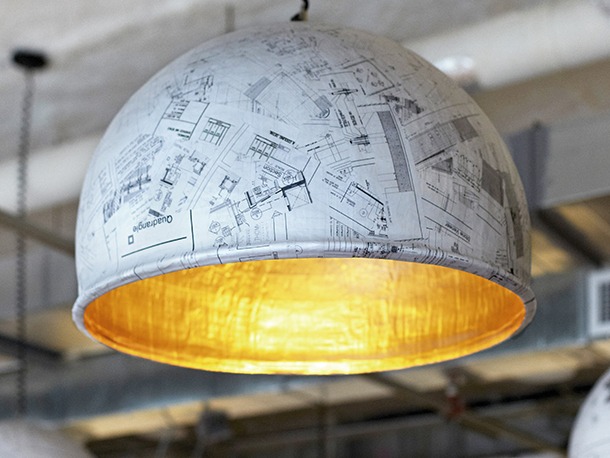 Toronto-based Quadrangle Architects have built a solid reputation on their ability to create innovative office environments, often transforming old industrial sites into modern, healthy workspaces. So when the time came to relocate their studio, the practice was presented with a unique opportunity: to apply their hard-held design principles to a site of their own, and in doing so produce a practical example of the team’s creative skills. True to form, they took on a space on the seventh floor of a former data centre in the city’s King West neighbourhood and set about converting it into a fully accessible, highly sustainable creative hub.

Since its formation in 1986, Quadrangle has applied an open plan concept to their studio space, with everyone from principals to interns based at open workstations. As well as promoting dialogue and cooperation, this helps to maximise access to natural daylight, an essential element in the firm’s emphasis on healthy, sustainable buildings. In the new office, daylight is supplied (along with sweeping views of the Toronto skyline) by windows that run the full perimeter of the space. Natural light is supplemented by a lighting system that uses motion and daylight sensing to adjust light levels. The system can be controlled remotely by smart phones and by each staff member’s VOIP phone and computer, conserving energy and improving lighting quality, particularly for those with low-vision.

“Lighting is one of the four main tools of our craft along with space, materials and movement,” explains Quadrangle principal Caroline Robbie. “The quality of light is essential and is never separated from these other elements in our design process.”

The firm’s relocation and its renewed emphasis on openness has been used to refocus its office culture in subtle but significant ways. Staff are asked to eat in the lunchroom rather than at their desks, prompting the kind of informal interactions that help foster a shift towards a collaborative team spirit. To encourage this shift, various touches have been added to the space to make it an attractive, pleasant environment, including the use of custom pendants, created in collaboration with Castor Design. Lined with a golden metallic sheen to create a warm glow and finished on the outside with old technical drawings, these pieces are a product of the two companies’ shared design vision, as Robbie explains:

“Quadrangle approached Castor at an early stage of the project for a joint exploration of how our core architectural materials palette could be translated into objects that would become a demonstrable part of the space.

“Castor brought back initial thoughts on processes to de- and re-construct these materials and over the course of the project, the palette was reduced to paper, metal and fabric.”

In tandem with this, the team focused on the use of decorative lighting within the space. “The collaboration process was fluid with everyone contributing drawings, test prototypes, material research and sourcing,” Robbie continues. “The resulting fixtures successfully blend the material explorations that the collaboration originally sought, with elements of sustainability, beauty and wit.”

Most of the fixtures created by Quadrangle and Castor use CCFL sources. In addition to the pendants in the lunchroom area, a cluster of traditionally shaped lampshades, created in simple white fabric, hangs in the reception area. The largest of the meeting rooms has been given one of Castor’s Invisible Chandelier’s – a cloud comprising hundreds of burnt out light bulbs, illuminated from within – while one of the smaller meeting spaces boasts a Steel Streetscape fixture, a single metal sheet, bent in two around a linear LED lamp.

As well as the bespoke fixtures, there are five decorative pieces located in prominent areas throughout the studio. Each was chosen for both the quality of light it produced and the suitability of its design character to an individual space. In the Snug, for example, intimacy is created with the large dome of Lightform’s Sky Garden, while the multi lamp-headed Dear Ingo fixture by Moooi was ideal for the needs of the model-making and materials area.

A glazed meeting room between the founding Principals’ workstations – wryly dubbed the Penalty Box by staff –  has been treated with a mobile of Sentry fixtures by Metalarte. Elsewhere,the Heracleum, a flower-like LED fixture by Moooi, and the clean white, bent form of the Ketamina fixture by Lucitalia both provide an element of juxtaposition to their locations in a muted meeting room and above the industrial metal reception.

All these pieces work alongside a general architectural lighting scheme based around a principle of high sustainability. Given the amount of natural light available in the new location, the design incorporates individually addressable fixtures, motion and daylight sensing and high efficiency lamping selections. There are linear pendant and recessed strip T5 fluorescent, CCFL track and LED under-cabinet and circular down lights throughout the space providing ambient lighting.

The lighting design for the studio was developed holistically with decorative and architectural lighting elements to ensure that sufficient levels of ambient and task-specific lighting levels were provided. Each of the decorative fixtures contributes to the illumination of the space, in levels appropriate to the individual character of each area.

By practicing what they preach, Quadrangle has already seen huge benefits from the new space.

“Since moving, the studio has been able to attract a higher calibre of staff and to convince clients to try unconventional ideas,” notes Robbie. “Thoughtful attention to user needs and comfort and the strong brand message conveyed throughout has resulted in tremendous staff and client satisfaction. Employees have found their favourite spaces to work and this staff ownership fosters collaboration and a strengthened office culture.”

Having completed their own studio, the practice has widened its focus, working with the building owner to attract other creative industries to the site, and so help establish a new, artistic hub in an otherwise overlooked corner of Toronto.